What if Life Expectancy Grows Faster?

Rising life expectancy is a good thing; indeed, Kevin Murphy and Robert Topel estimated in a 2006 paper in the Journal of Political Economy ("The Value of Health and Longevity," 114:5, pp. 871-904) that the 30 years of additional life expectancy gained by an average American during the 20th century was $1.3 million per person. But growing life expectancies also put pressure on public and private retirement programs. What if those programs are underestimating how much longevity is likely to rise? The April 2012 Global Financial Stability report from the IMF tackles this question in Chapter 4: "The Financial Impact of Longevity Risk."

The first step in their argument is to make plausible the claim that government and private retirement plans may well be understating how much longevity is likely to rise (citations and references to exhibits omitted): "The main source of longevity risk is therefore the discrepancy between actual and expected lifespans, which has been large and one-sided: forecasters, regardless of the techniques they use, have consistently underestimated how long people will live. These forecast errors have been systematic over time and across populations. ... In fact, underestimation is widespread across countries: 20-year forecasts of longevity made in recent decades in Australia, Canada, Japan, New Zealand, and the United States have been too low by an average of 3 years. The systematic errors appear to arise from the assumption that currently observed rates of longevity improvement would slow down in the future. In reality, they have not slowed down, partly because medical advances, such as better treatments for cancer and HIV-AIDS, have continued to raise life expectancy ..." 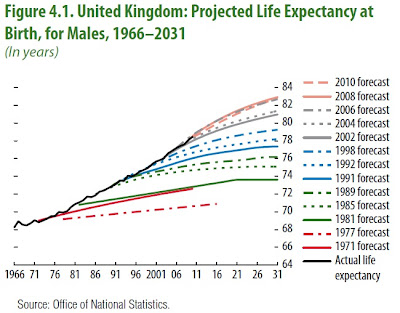 The IMF asks what would happen if life expectancy by 2050 turns out to be three years longer than current projected in government and private retirement plans: "[I]f individuals live three years longer than expected--in line with underestimations in the past--the already large costs of aging could increase by another 50 percent, representing an additional cost of 50 percent of 2010 GDP in advanced economies and 25 percent of 2010 GDP in emerging economies. ... [F]or private pension plans in the United States, such an increase in longevity could add 9 percent to their pension liabilities.  Because the stock of pension liabilities is large, corporate pension sponsors would need to make many multiples of typical annual pension contributions to match these extra liabilities."

What's to be done? One step could be to build into the benefit formal for public pensions, like Social Security, provisions for an automatic decline in expected benefit levels for future retirees as life expectancy rises. The enormous change that has taken place in private retirement plans, switching from "defined benefit" plans in which the employer promises a stream of future payments to "defined contribution plans where the employee has a retirement account with a certain amount in that account acts as a way of transferring longevity risk from employers to workers. Of course, retirees can then protect themselves from longevity risk and outliving their assets by putting a substantial share of their retirement funds in annuities.

It's not enough just to set an expectation for how much the population will age, and to plan accordingly. We also have to plan for the historically likely possibility that life expectancies may grow faster than we expect.