Every intro econ class points out that the total aggregate demand economy is the sum of consumption plus investment plus government plus exports minus imports. It also points out that the "government" category for "government demand" in this equation isn't the total government budget, but rather government spending on purchasing goods and services and paying employees. Parts of the government budget that involve a transfer of funds to consumers are not treated as part of demand by government , but instead are treated as demand by consumers. Daniel Carroll gives the facts behind this distinction in "The Shrinking Government Sector," published in the April 2012 issue of Economic Trends from the Cleveland Fed.

"While it is true that the ratio of government expenditures—including federal, state, and local government—to GDP increased precipitously during the crisis (reaching 21.1 percent in 2009), it has been trending down sharply since. At 19.7 percent as of the fourth quarter of 2011, it has given back 70 percent of its post-crisis increase. 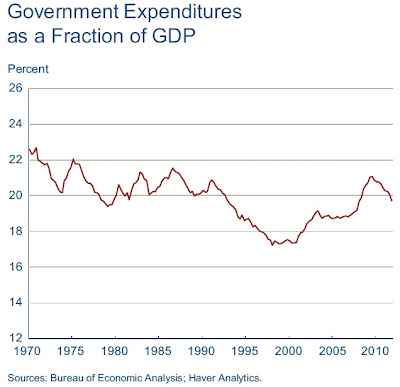 Carroll also provides a graphs of income transfers by government: again, in the breakdown of GDP into components of aggregate demand, these are allocated to the "consumption"category. Note that this graph isn't directly comparable to the one above, because it starts in 1997 rather than in 1970. 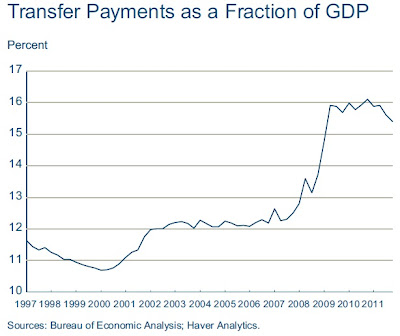 1) I hadn't known that government spending on goods and services was actually higher in the much of the 1970s than it is today, nor that government demand for goods and services had such a big decline in the 1990s. For those who have a vision of government doing things like building roads, providing education and national defense, enforcing laws, and paying for research and development, government is doing less of those things as a share of the economy now than it was a few decades ago.

2) The recent rise in government transfer payments is extraordinarily large 4%: nearly 4% of GDP during the recent recession, or more than 5% of GDP if one compares from the peak of the business cycle in 2000 to the trough in 2009 and 2010. For comparison, total defense spending in 2011 was 4.7% of GDP. Thus, just rise in government transfer payments has been roughly comparable to total defense spending.

3) One way to look at the government budgets is that tax and other revenues pay for transfers, and borrowing pays for all government demand for goods and services. Carroll writes: ""[G]overnment as a component of GDP does not include transfers; however, transfers greatly exceed tax revenue and nearly exhaust total revenues. This leaves little funding to pay for government consumption and investment, and so the difference must be borrowed."