For many people, saying that a little bit of inflation can have good effects is akin to saying that a little bit of leukemia can have good effects. Too much inflation, especially volatile rates of inflation, does operate like sand in the gears of an economy, by making it unclear how much prices throughout an economy are rising or falling in real terms. But But when an economy is trying to climb out of a recessionary episode caused by a wave of overindebtedness, and is suffering sustained high unemployment at the same time, a bit of inflation can grease the transition.

When it comes to overindebtedness, a bit of inflation means that past debts can be repaid in inflated dollars. For the millions of homeowners struggling with mortgages that are worth more than the value of their property, as well as others with high debts, a bit of inflation is a breath of fresh air. In the case of wages, standard price theory suggests that when unemployment is high and a large quantity of labor is available, wages should fall--for the same reason that at when the quantity of apples at an autumn farmers' market is high, the price of apples be lower than at other times. But employers are reluctant to cut wages. It decreases morale of existing workers, and encourages the more high-productivity workers--who have better outside options--to look for  other jobs. In contrast, apples don't get sulky and inefficient when the price of apples declines.

But here's a kicker: Workers strongly dislike cuts in nominal wages, but they are typically less annoyed by cuts in real wages. Here's an intriguing figure from Mary Daly, Bart Hobijn, and Brian Lucking at the San Francisco Fed. The  solid thin blue line shows the inflation rate; the thicker red line shows nominal growth in wages; and the dashed black line shows the real wage growth--that is, the growth in the buying power of wages after taking inflation into account. 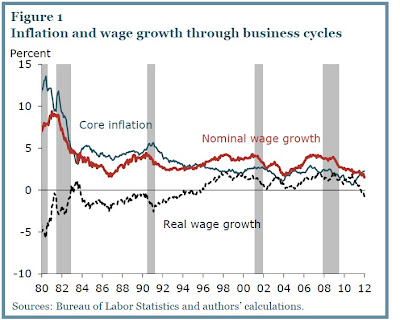 This data suggests that average wage growth in the U.S. economy was negative for most of the 1980s and half of the 1990s, and then crept into positive territory for a time, before dropping off to negative again in 2011. This graph must be interpreted with care, because it doesn't mean that the average real wage of those who held jobs 1982 was falling for a decade.  The workforce changes over time. In the 1980s, for example, there was a dramatic increase in the number of women entering the (paid) labor market, and many of them took relatively lower-wage work. This factor would tend to reduce the rise in "average" wages in any given year, even if those who were already in the workforce in the late 1970s saw a rise in their wages over that decade. However, the graph also helps to explain how the U.S. economy adjusted from very high unemployment rates in the early 1980s to low unemployment rates by the mid-1990s: in short, average real wages were lower, which encouraged more hiring.

My point is that a bit of inflation can help an adjustment in real wages across the economy during a time of sustained high unemployment, because it affects all employers and all workers, and doesn't require individual employers to cut nominal wages. Those interested in some additional background on the extent of nominal and real wage stickiness at a more technical level might begin with an article from the Spring 2007 issue of my own Journal of Economic Perspectives: "How Wages Change: Micro Evidence from the International Wage Flexibility Project," by William T. Dickens, Lorenz Goette, Erica L. Groshen, Steinar Holden, Julian Messina, Mark E. Schweitzer, Jarkko Turunen, and Melanie E. Ward.