The Federal Reserve has set up "swap lines" with other central banks around the world. What are these? Galina Alexeenko, Sandra Kollen, and Charles Davidson offer a nice overview in "Swap Lines Underscore the Dollar's Global Role," in EconSouth from the Atlanta Fed.

The economic issue here is the central role of the U.S. dollar in global economic transactions. As they write, "[O]ne of the major business lines of European banks is providing financing in dollars on
a global scale—for trade, purchasing dollar-denominated assets, or syndicating loans to corporations. Banks the world over, in fact, have a great need for dollars because much of the world’s trade, investment, and lending is conducted in U.S. currency." But during an international financial crisis, as various financial markets freeze up, it may be very expensive or even impossible at certain time for banks around the world to get the U.S. dollars they need to carry out transactions. The Federal Reserve's swap lines are a temporary measure to make U.S. dollars available at such time around the world, so that financial instability is less likely to persist and grow.

How does a swap line work? Alexeenko, Kollen, and Davidson explain:

The description helps to clarify why such swap lines are not a "bailout" or any such prejudicial term. The exchange rate for the swap is locked in, and any U.S. dollar loans that are made will pay interest to the Fed.  Because the U.S. dollar plays such a central role in global transactions, the Fed is just making sure that a temporary shortfall of dollars in a foreign financial system doesn't make a financial crisis worse.

Here's a timeline for these swap lines. (I found it interesting that these authors differentiate between the "Global Financial Crisis (2007-2008)" and the "European Financial Crisis (2009-current)." I've been trying to sort out in my own mind, without yet reaching firm conclusions, about how to think of these episodes as connected in some ways and separate in others.)

How large have these swap lines been? This graph shows the sharp rise in assets held by the Federal Reserve starting in mid-2008. A fairly substantial portion of these assets (say, $500 billion or so) were held in the form of swap lines at the height of the global financial crisis in late 2008 and early 2009, but these swap lines were ended by February 2010. More recently, you can see on the graph the much smaller swap lines--in the range of $100 billion--established to address the European financial crisis. 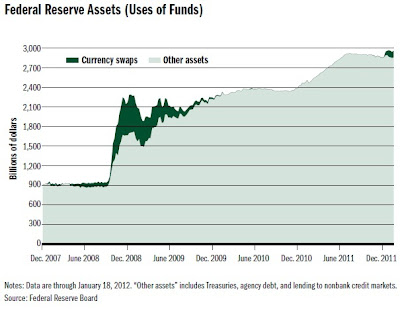