How to Reduce U.S. Housing Debts: The IMF Speaks

The global financial crises was preceded by a huge run-up in household debt, which in a number of countries helped to fuel a rise in housing prices. When housing prices then deflated, households were left with oversized debt burdens that they couldn't meet. One of the reasons behind the sluggish "recovery" since the Great Recession is that so many households have been struggling to pay down or renegotiate their debts. How to reduce these housing-related debt burdens? Some aggressive policy steps to reduce housing debt are recommended by (to me, at least) an unlikely source: the International Monetary Fund in the April 2012 World Economic Outlook.

Chapter 3 of the report, "Dealing with Household Debt," first rehearses facts about about this cycle of rising debt, housing price bubbles, and then after the bubble pops, a sluggish recovery. This story is  fairly conventional; for example, I posted on "Leverage and the Business Cycle" about a month ago on March 23. What surprised me about the IMF report was the policy recommendations: "[B]old household debt restructuring programs such as those implemented in the United States in the 1930s ... can significantly reduce debt repayment burdens and the number of household defaults and foreclosures. Such policies can therefore help avert self-reinforcing cycles of household defaults, further house price declines, and additional contractions in output."

The IMF uses the U.S. Home Owners' Loan Corporation, established in 1933, as it main example of how best to address housing debt--and contrasts it unfavorably with the policy steps the U.S. has taken since 2009. Here's the IMF's description of how the U.S. Home Owners' Loan Corporation worked (footnotes, citations, and references to tables and boxes omitted):

"To prevent mortgage foreclosures, HOLC bought distressed mortgages from banks in exchange for bonds with federal guarantees on interest and principal. It then restructured these mortgages to make them more affordable to borrowers and developed methods of working with borrowers who became delinquent or unemployed, including job searches. HOLC bought about 1 million distressed mortgages that were at risk of foreclosure, or about one in five of all mortgages. Of these million mortgages, about 200,000 ended up foreclosing when the borrowers defaulted on their renegotiated mortgages. The HOLC program helped protect the remaining 800,000 mortgages from foreclosure, corresponding to 16 percent of all mortgages. HOLC mortgage purchases amounted to $4.75 billion (8.4 percent of 1933 GDP), and the mortgages were sold over time, yielding a nominal profit by the time of the HOLC program’s liquidation in 1951. The HOLC program’s success in preventing foreclosures at a limited fiscal cost may explain why academics and public figures called for a HOLC-style approach during the recent recession.

A key feature of HOLC was the effective transfer of funds to credit-constrained households with distressed balance sheets and a high marginal propensity to consume, which mitigated the negative effects on aggregate demand discussed above.... Accordingly, HOLC extended mortgage terms from a typical length of 5 to 10 years, often at variable rates, to fixed-rate 15-year terms, which were sometimes extended to 20 years. ...  In a number of cases, HOLC also wrote off part of the principal to ensure that no loans exceeded 80 percent of the appraised value of the house, thus mitigating the negative effects of debt overhang discussed above.

Here's a figure showing the U.S. housing market in recent years. As the IMF reports: "There were about 2.4 million properties in foreclosure in the United States at the end of 2011, a nearly fivefold increase over the precrisis level, and the “shadow inventory” of distressed mortgages suggests that this number could rise further." The area shade in blue shows the number of properties in foreclosure. The area shaded in yellow is an estimate of "shadow inventory"--that is, additional properties likely to go into foreclosure."Shadow inventory indicates properties likely to go into foreclosure based on a
number of assumptions. It includes a portion of all loans delinquent 90 days or more
(based on observed performance of such loans); a share of modifications in place (based
on redefault performance of modified mortgages); and a portion of negative equity
mortgages (based on observed default rates)." 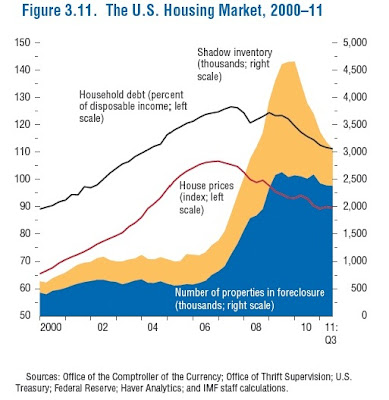 Notice that the spike in foreclosures starts at about the same time as housing prices top out, in late 2006, and peaks around early 2009. These numbers don't include the larger number of people-- about 11 million, which is one in every four mortgages in the country--who have "underwater" mortgages where the value of the mortgage exceeds the value of the property.

What policies has the U.S. followed to deal with this foreclosure problem? The IMF reports that the main policy is "the Home Affordable Modification Program (HAMP), the flagship mortgage debt restructuring initiative targeted at households in default or at risk of default." It was adopted in February 2009, and has been revised a number of times since. But so far, the policy hasn't accomplished much. Here's the IMF:

"However, households already in default are excluded from HARP, and the impact on preventing foreclosures is likely to be more limited. HAMP had significant ambitions but has thus
far achieved far fewer modifications than envisaged. ... Meanwhile, the number of permanently modified mortgages amounts to 951,000, or 1.9 percent of all mortgages. By contrast, some 20
percent of mortgages were modified by the Depression-era HOLC program, and HAMP’s targeted reach was 3 to 4 million homeowners. By the same token, the amount disbursed ... as of December 2011 was only $2.3 billion, well below the allocation of $30 billion (0.2 percent of GDP)."

Of course, there is a list of reasons for this minimal effect. It requires the cooperation of creditors and loan officers, which is voluntary. When mortgages have been bundled together and sold as securities, it's not clear how the renegotiation should work. Tight eligibility rules mean that the unemployed and those who have suffered big drops in income often aren't eligible. The policy typically relied on lower interest rates and longer mortgage terms, but only rarely could reduce the outstanding principal on a house that had lost value. The reductions in mortgage payments often wasn't large, so roughly a third of those who made it through the program ended up defaulting again--which of course reduces anyone's incentive to participate in the first place. Fannie Mae and Freddie Mac, which hold about 60% of outstanding U.S. mortgages, don't participate.

So here we are, six years after the wave of foreclosures started and three years after it peaked, still arguing about whether something substantial ought to be done--and if so, what. Without drilling down into details of the alternative proposals, it seems to me that a modest share of the trillions in federal borrowing in the last few years, along with the trillions of assets that the Federal Reserve has accumulated through its "quantitative easing" policy, might have been better applied to assisting the millions of American households who took out a mortgage and bought a house--implicitly relying on the ability of supposedly better-informed lenders to tell them what they could afford--and then were blindsided by the national downturn in housing market prices.