One of the most sizzling of all hot-button issues over the last 40 years has been the sharp rise in immigration from Mexico, much of it illegal. Thus, it's intriguing to read the report by Jeffrey Passel, D’Vera Cohn, Ana Gonzalez-Barrera called "Net Migration from Mexico Falls to Zero—and Perhaps Less," from the Pew Research Center.

They write (footnotes and citations omitted): "The largest wave of immigration in history from a single country to the United States has come to a standstill.... The U.S. today has more immigrants from Mexico alone—12.0 million—than any other country in the world has from all countries of the world. Some 30% of all current U.S. immigrants were born in Mexico. The next largest sending country—China (including Hong Kong and Taiwan)—accounts for just 5% of the nation’s current stock of about 40 million immigrants.... Beyond its size, the most distinctive feature of the modern Mexican wave has been the unprecedented share of immigrants who have come to the U.S. illegally. Just over half (51%) of all current Mexican immigrants are unauthorized, and some 58% of the estimated 11.2 million unauthorized immigrants in the U.S. are Mexican."


Here's are two illustrative figures. The first shows the total Mexican-born population in the United States, showing how the total just takes off from about 1970 up through the middle of this decade.  The second figure breaks the total down into legal and "unauthorized," and shows that the decline in the unauthorized total actually started back about 2007. 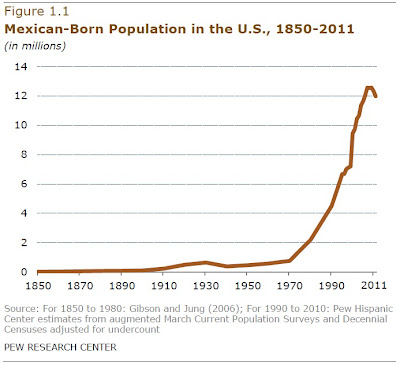 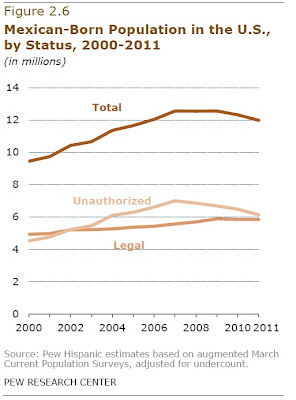 Will immigration from Mexico surge again in the next few years, if and when U.S. employment gradually recovers? I suspect that such immigration may rise again, but much more mildly than in the past. There are a number of reasons, going back several years, why net immigration from Mexico has leveled out or perhaps even turned slightly negative. Start by looking at a graph of annual immigration (that is, not the total Mexican-born population, but the annual flow). It actually peaked back in the late 1990s, and there has been an especially sharp decline going back to about 2004. 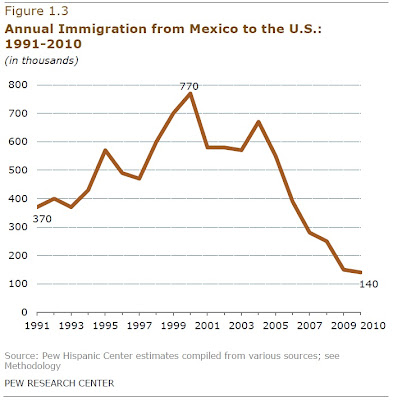 What are the causes of this decline? In no particular order, here are some of the longer-term reasons dating back to before the Great Recession hit full force:

1) Border enforcement is way up. "Appropriations for the U.S. Border Patrol within the Department of Homeland Security (DHS)—only a subset of all enforcement spending, but one especially relevant to Mexican immigrants—more than tripled from 2000 to 2011, and more than doubled from 2005 to 2011. The federal government doubled staffing along the southwest border from 2002 to 2011, expanded its use of surveillance technology such as ground sensors and unmanned flying vehicles, and built hundreds of miles of border fencing. .. In spite of (and perhaps because of) increases in the number of U.S. Border Patrol agents, apprehensions of Mexicans trying to cross the border illegally have plummeted in recent years—from more than 1 million in 2005 to 286,000 in 2011—a likely indication that fewer unauthorized migrants are trying to cross. Border Patrol apprehensions of all unauthorized immigrants are now at their lowest level since 1971." 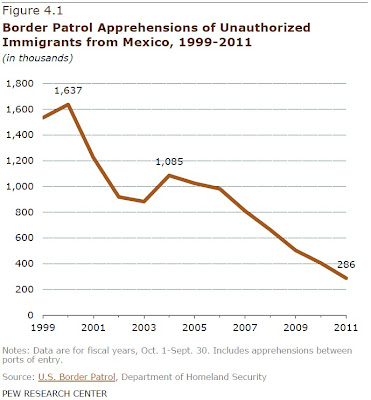 2) Deportations are way up. "As apprehensions at the border have declined, deportations of unauthorized Mexican immigrants–some of them picked up at work sites or after being arrested for other criminal violations–have risen to record levels. In 2010, 282,000 unauthorized Mexican immigrants were repatriated by U.S. authorities, via deportation or the expedited removal process."

3) Mexico's demography is changing, with fewer children per woman and an older population, so the pressures on young men to leave and look for work in the U.S. are much reduced. "In Mexico, among the wide array of trends with potential impact on the decision to emigrate, the most significant demographic change is falling fertility: As of 2009, a typical Mexican woman was projected to have an average 2.4 children in her lifetime, compared with 7.3 for her 1960 counterpart." 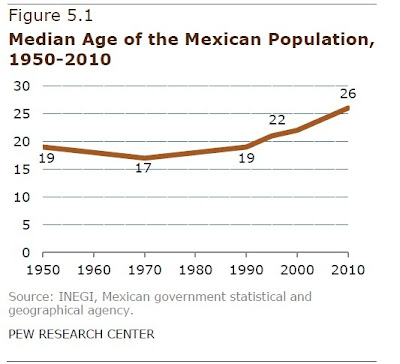 "Mexico today is the world’s 11th-largest country by population with 115 million people and the world’s 11th-largest economy as measured by gross domestic product (World Bank, 2011). The World Bank characterizes Mexico as an “upper-middle income economy,” placing it in the same category as Brazil, Turkey, Russia, South Africa and China. Mexico is also the most populous Spanish-speaking country in the world. ... In the three decades from 1980 to 2010, Mexico’s per capita GDP rose by 22%—from $10,238 in 1980 to about $12,400 in 2010.17 This increase is somewhat less than the average for all Latin American/Caribbean countries during the same period (33%) and significantly less than the increase in per capita GDP in the United States during this period (66%). Meantime, during this same period, the per capita GDP in China shot up thirteenfold—from $524 in 1980 to $6,816 in 2010. In more recent years, Mexico’s economy, like that of the United States and other countries, fell into a deep recession in 2007-2009. But since 2010 it has experienced a stronger recovery than has its neighbor to the north ..."

5) Prospects for education and health care in Mexico have improved, as well. "For example, 92.4% of all Mexicans ages 15 and older were literate in 2010, up from 83% in 1980.19 In 2010, the average number of years of education of Mexicans ages 15 and older was 8.6, compared with 7.3 years in 2000.  In terms of health care, almost three-in-five (59%) Mexicans in 2000 lacked health care coverage. In 2003, the Mexican federal government created a health care program, Seguro Popular, that provides basic coverage to the uninsured and is free for those living under the poverty line. The share of the Mexican population with access to health care had increased from less than half (41%) in 2000 to slightly more than two-thirds (67%) in 2010, an increase of 26 percentage points."

In short, Mexico in the 1970s and 1980s was demographically top-heavy with teenagers and young adults from large families living in a country with a weak economy and limited prospects for education and health care, right next to a much richer country with a weakly enforced border. A flood of immigration followed. Now, Mexico is on average older, with smaller families, and the prospects for education, health, and finding economic opportunity in Mexico are notably better. Enforcement at the border and within the U.S. economy have ramped up considerably. In that situation, a large resurgence of immigration from Mexico seems unlikely.

For earlier posts on immigration, see: