The U.S. corporate sector has high profits. Interest rates are near historical lows. Those factors would seem to encourage investment, expansion, and hiring. But here we are in 2012, with the official end of the Great Recession nearly three years in the rear-view mirror, and many firms are still holding back. Scott R. Baker, Nick Bloom, and Steven J. Davis have written "Is Policy Uncertainty Delaying the Recovery?" as a policy brief for the Stanford Institute for Economic Policy Research. The underlying research paper and data are available here

There are lots or theoretical reasons why a high level of uncertainty might cause managers to be hesitant about starting new projects, investing, or hiring workers. But how does one collect data on the level of uncertainty--and in particular, on the level of uncertainty related to economic policy? Baker, Bloom and Davis mix together three sources of data into a single index:  "We construct our index of policy uncertainty by combining three types of information: the frequency of newspaper articles that reference economic uncertainty and the role of policy; the number of federal tax code provisions that are set to expire in coming years; and the extent of disagreement among economic forecasters about future inflation and future government spending on goods and services." Here is their index, where a level of 100 is set arbitrarily to be equal to the average of the index for the 25 years from 1985 up to 2010. 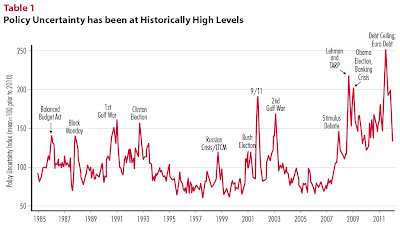 Constructing any index like this involves some more-or-less arbitrary choices, so there will always be room for dispute. In addition, while the authors offer some arguments that this index is emphasizing "policy" uncertainty, I suspect that it's picking up other kinds of swings in economic confidence as well.

But for what it's worth, it does seem that the index is spiking at times one might expect: 9/11, the "Black Monday" stock market meltdown in 1987, wars, presidential elections, and the like.  In addition, policy uncertainty by this measure has been especially high since 2008, although in early 2012 the measure has fallen back to 2009 levels.   When the authors look more closely at the newspaper articles underlying their index, they find that the greatest sources of uncertainty are those related to monetary issues, which includes many steps taken by the Federal Reserve, and tax issues, like whether various tax provisions will be extended or ended.

How much does policy stability matter? As the authors ask (references to figures omitted):

"How much near-term improvement could we expect from a stable, certainty-enhancing policy regime? We use techniques developed by Christopher Sims, one of the two 2011 Nobel laureates in economics, to estimate the effects of economic policy uncertainty. The results for the United States suggest that restoring 2006 (pre-crisis) levels of policy uncertainty could increase industrial production by 4% and employment by 2.3 million jobs over about 18 months. That would not be enough to create a booming economy, but it would be a big step in the right direction."