The Emerging Market Research Institute at Credit Suisse has an intriguing report out on "Opportunities in an Urbanizing World." From the "Editorial" at the start: 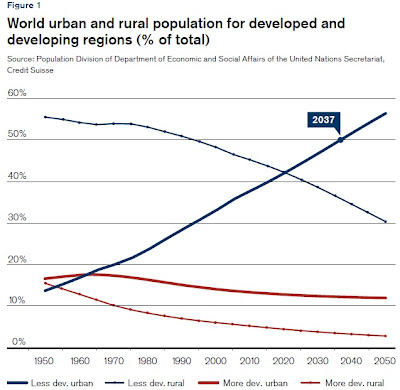 The coming urbanization will be almost entirely a developing country phenomenon: "Looking at population projections in the world's 15 largest urban agglomerations in 2025, we note that just two--Tokyo and New York City--are in developed countries. Not a single one of the world's 25 fastest projected growing major cities is in a developed country." But even within developing countries, a number of countries are already seeing decelerating urbanization, because their levels of urbanization are already 70-90% of the population, and so there isn't much more room to urbanize. For example, Malaysia, Mexico, Peru, Colombia, Turkey, Czech Republic, Russia and Hungary all have urbanization rates already above 66%, and Argentina, Brazil, Chile, South Korea and Saudi Arabia all have urbanization rates already over 80%.

But another group of countries, mostly in Asia and Africa, but also including Poland, are seeing accelerating urbanization: South Africa, Morocco, Nigeria, Poland, China, Philippines, Indonesia, Egypt, Thailand, Pakistan, Vietnam, Bangladesh, India, Kenya. As the report points out, this list includes six of the eight largest countries by population in the world, and about 55% of world population. 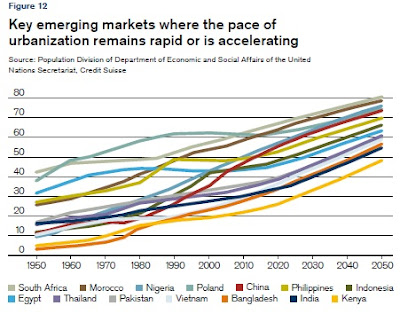 The report argues: "Exploring the relationship between per capita economic growth and urbanization, we find that there is a sweet-spot as countries urbanize (in the range of 30%-50% of total population), accompanied by peak per capita GDP growth." It offers a discussion of each these countries of accelerating urbanization.

Here, I'll just make the overall point that urbanization creates economies and diseconomies. On one side, it concentrates, consumers, workers, and firms in a way that allows a flow of information, goods, and services that feeds specialization, economies of scale, technological development, and economic growth. On the other side, it also concentrates problems of pollution, crime, poor health, poverty, and corruption, and raises needs for physical infrastructure and working institutions.  The politics and economics of the future are likely to be hammered out, one issue at a time, for better or worse, in the large cities of developing countries. I discussed some of these broader issues of urbanization in "The Coming Urban World" in a post last August 29, 2011.

I discovered the Credit Suisse report via a post by Alex Tabarrok at Marginal Revolution.
Posted by Timothy Taylor at 6:00 AM