The Price of Nails

I just ran across a delightful working paper by Daniel Sichel of the Federal Reserve that was presented at several seminars last summer: "Everyday Products Weren't Always that Way: Prices of Nails and Screws since about 1700." Here's a version presented in July 2011; here's a version from an October presentation. I'll focus here on the price of nails. Sichel writes:

"Using the preferred price index developed in this paper, the real price of nails on a quality adjusted basis fell—relative to a broad bundle of consumption goods as measured by the overall CPI—by a factor of about 15 from its peak in the mid-1700s to the middle of the 20th century, averaging a decline of 1.3 percent a year. (Prices have risen some in the past several decades.) ...


"[T]oday, a nail-making machine with a footprint of about three feet square [can]  produce 300 to 450 nails per minute. If we assume that one worker can operate 4 machines at once and that each machine produces 350 nails a minute, then labor productivity of nail production has increased by a factor of 1400 times since the era of hand-forged nails when it took a worker about a minute to produce a nail. With most of this change occurring over the period from 1790 to 1940, the annual rate of increase in labor productivity was nearly 5 percent a year ..."


Here's an illustrative figure. The colors show the primary changes in nail technology over time, from hand-forged nails, to a mixture of forged and cut nails, to the predominance of cut nails, to the modern wire nails. (In interpreting the graph, notice that the real price on the vertical axis is a log scale for cents/nail.) 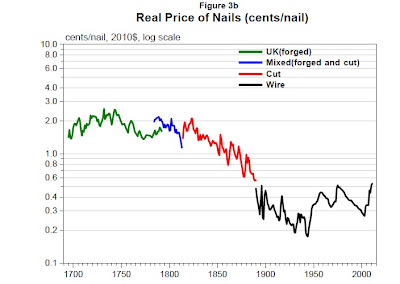 This dramatic change in productivity of nail production has the implication that nails were far more expensive in relative terms back in the 1700s. Sichel offers a number of vivid anecdotes and statistics to support this claim. For example: