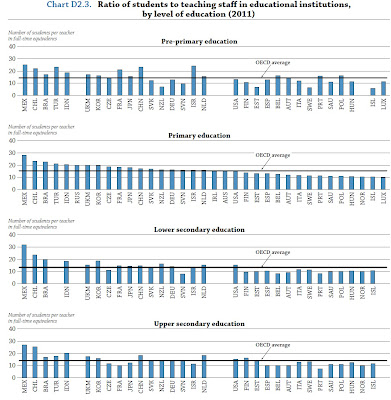 Next, here's a look at teacher pay. When compared in absolute dollars, the pay of U.S. teachers looks quite good by international standards--but after all, the U.S. economy generally has higher per capita incomes and higher wages than these other countries. Thus, the figure here shows the ratio of the pay of teachers to the pay of someone with a tertiary (that is, college) degree in these comparison countries.

Finally, here's a comparison of the number of hours that teachers work in different counties, where US teachers are well above average, using the example of lower secondary school. 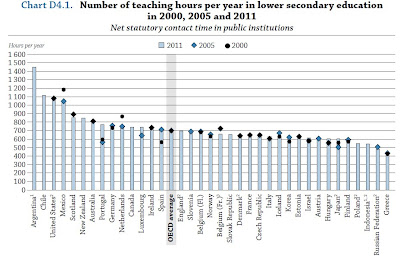 The expectations of teachers and responsibilities of teachers can be quite different across countries, so it would be a mistake to view these comparisons as precisely apples-to-apples. But bring them up with a teacher of your acquaintance, and you'll get an earful of reaction.
Posted by Timothy Taylor at 8:10 AM