Each September, the U.S. Census Bureau releases its annual estimates of the U.S. poverty rate, and even when the news isn't worse, it's hasn't been good for a long time. The essential problem, as shown in the figure below, is not so much that the poverty rate bumped up during the Great Recession, bur rather that the official poverty rates has been stuck at about the same level of about 13-15% since the early 1980s. 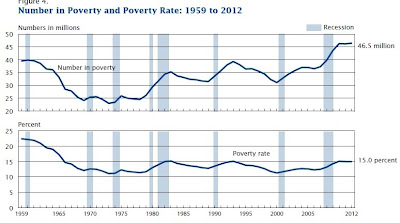 This pattern would seem to require endorsing some combination of the following dispiriting views: either government anti-poverty policies are ineffective in reducing poverty, or any effectiveness of anti-poverty programs in reducing poverty is being counterbalanced by other economic or demographic factors that are creating an offsetting rise in poverty. 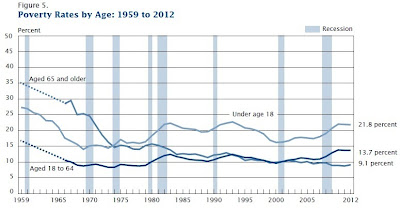 However, in a paper published in the Fall 2012 issue of the Brookings Papers on Economic Activity, Bruce D. Meyer and James X. Sullivan present some alternative interpretations and more cheerful conclusions in "Winning the War: Poverty from the Great  Society to the Great Recession." They conclude: "Despite repeated claims of a failed war on poverty, our results show that  the combination of targeted economic policies and policies that support  growth has had a significant impact on poverty. ... Noticeable improvements have been made in the last decade; although not as big as the improvements in some earlier decades, they are comparable to or better than the progress made in the 1980s. We may not yet have won the war on poverty, but we are certainly winning."

Meyer and Sullivan offer a number of different ways of adjusting these official poverty measures. For example, many low-income people receive support through the Earned Income Tax Credit, which isn't counted in the official poverty line, as well as getting support from food stamps, Medicaid, and other programs. Economists have also long argued that the Consumer Price Index overstates the true rise in the standard of living (for example, by not adequately taking new goods and inventions into account), and so by increasing the poverty line each year using the CPI inflation rate, the poverty line actually is creeping a little higher in terms of actual standard of living each year. This effect is quite small in any single year, but over the last half-century, it adds up.

Here's one of their illustrative calculations. The official poverty line is in blue. They then calculated income in a way that included taxes and the value of noncash benefits. They set up the calculation so that the two measures would have the same poverty rate in 1980, and then adjusted the poverty rate over time using the inflation rate. But when after-tax income is used in the calculation, the poverty rate falls more sharply over time, including during the last 30 years. 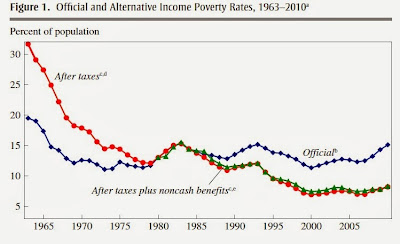 But perhaps their most striking result uses data on consumption, rather than data on income, to calculate the change in poverty rates over time. Consumption data comes from a different national survey than does income data (the Current Expenditure Survey rather than the Current Population Survey). Meyer and Sullivan point out that at the bottom of the income distribution, the answers about income on the Current Population Survey clearly understate the amount of income received. For example, only about half of welfare payments seem to be reported in the Current Population Survey. The proportion of economic activity that goes unreported to the tax authorities--and to the government survey--is probably higher at the bottom of the income distribution, too. In addition, when we talk about poverty what we are really worried about is more accurately captured by consumption rather than by income. 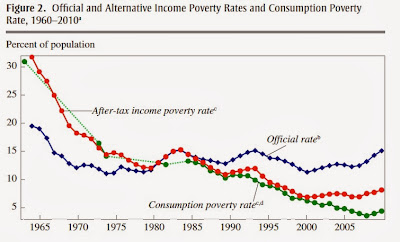 Thus, they write: "The results in this paper contradict the claim that poverty has shown little  improvement over time and that antipoverty efforts have been ineffective.  We show that moving from traditional income-based measures of poverty to  a consumption-based measure, which is arguably superior on both theoretical and practical grounds—and, crucially, accounting for bias in the cost-of-living adjustment—leads to the conclusion that the poverty rate declined by 26.4 percentage points between 1960 and 2010, with 8.5 percentage points  of that decline occurring since 1980."

Just to be clear, the notion that the consumption-based poverty rate nearly reached zero percent does not mean that the war on poverty is won. After all, the poverty rate was originally set back in the early 1960s, and although the poverty line has been adjusted upward by the rate of inflation over time, it has not been adjusted for the amount of economic growth that has occurred. All poverty lines are set in the context of the society's overall level of income: thus, a very low-income country the poverty rate per person might be set at $1.25/day or $2/day, while in the United States, the  poverty rate for a family of 3 is around $16-$17 per person per day. One can argue that because the U.S. economy has grown dramatically in the half-century since the poverty level was set, the poverty line should be higher. But still, it's worth knowing that the U.S. has made progress in terms of the existing poverty line--when using more appropriate standards of well-being like consumption or broader definitions of income,