At Least It's Not Still 59 Cents

Back when I was in college in the late 1970s and early 1980s, it was typical to hear that women earned 59 cents for every $1 earned by men. The figure below, taken from the September 2013 Census Bureau report on "Income, Poverty, and Health Insurance Coverage in the United States: 2012," by Carmen DeNavas-Walt, Bernadette D. Proctor,and  Jessica C. Smith, shows why 59 cents had such force. Looking back for 20 years through the 1960s and the 1970s, the ratio of median earnings for a full-time female work to that of a full-time male worker had hovered at around 59 cents--despite what seemed to be enormous changes in the role of women in the workforce during this time. 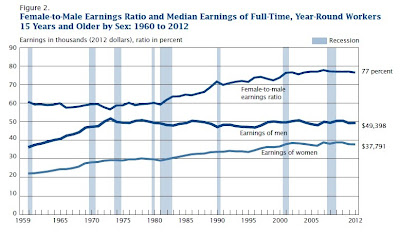 A standard explanation for the seeming stability of the 59 cents during the 1960s and 1970s was that there were two opposing patterns at work as women entered the paid workforce in large numbers. The labor force participation rate for women rose from 38% in 1960 to about 51% by 1980. Many women were gaining experience and credentials in the paid workforce, which should have tended to push up the ratio of female/male wages, but many of the women who were entering the paid workforce for the first time were taking low-paid entry-level jobs, which tended to pull down the ratio of female/male wages. During the 1960s and 1970s, these factors largely offset each other.

I can report that this argument was not a popular one for a male economics major to make during  his college days in the early 1980s. (And yes, I was careful to point out that the story of counterbalancing forces had no particular implication for how much gender discrimination continued to exist.) But the story did have a testable implication: after the process of women entering the paid workforce for the first time had largely run its course, then the effect of women having more experience and credentials should dominate and the female/male wage ratio would rise. Indeed, the female/male earnings ratio did start rising right around 1980, and now stands at 77%.

Thus, the good news in terms of pay equity is that at least it's still not 59 cents for every $1. The ongoing issue is how to explain the remaining wage gap, and there's considerable controversy on this point. For example, if one adjusts for the industry in which people work, or the kinds of jobs they do, the female/male wage gap looks smaller. But what if those industries and jobs and the pay levels in those industries and job choices are themselves, at least to some extent, the result of patterns of unequal treatment by gender?

It does seem clear that a substantial share of the remaining gender gap is due to women's taking a greater share of responsibility for children in particular. For example, here's a 1998 article  by Jane Waldfogel in the Journal of Economic Perspectives (where I've been the managing editor since 1987) looking at this "family gap."  Of course, this then leads to an argument over the extent to which women are choosing these responsibilities and the extent to which these responsibilities are being forced upon them. Perhaps scarred by my college exposure to these issues, I'll duck that question here, and just note that other countries have far more extensive parental leave rules than does the United States. The evidence on the female/male wage gap seems consistent with an overall pattern that outright discrimination by employers in labor markets has diminished, and today the larger reason underlying the female/male wage gap are social expectations and pressures from both men and women about industry and job choices, and about how the tasks of child-raising will be divided.

One statistical  note here: The figure shows the ratio of median wages, not average wages. For the uninitiated, the median is the number where half have more and half have less. If those at the top of the income distribution get more, while everyone else remains the same, then the average income level will rise, but the median will not. The median is often more useful for getting a sense of the "typical" worker in the middle of the overall income distribution, which is why it is used here, but it would be incorrect to look at the median and conclude that average wages have not risen. Indeed, I assume that men substantially outnumber in the top 1% or the top 10% of the earning distribution, and so the focus here on median earnings will in that way understate the amount of gender inequality remaining.
Posted by Timothy Taylor at 6:00 AM