The future US workforce needs a wide range of skills, only some of which are likely to be delivered through a conventional two-year or four-year college degree. Natalia Aivazova looks at "Role of Apprenticeships
in Combating Youth  Unemployment in Europe and the United States," written as Policy Brief PB13-20 (August 2013) for the Peterson Institute for International Economics. 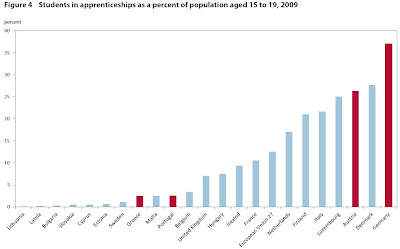 This EU data doesn't include estimates for the United States, but a recent OECD report called "A Skills beyond School Review of the United States," by Małgorzata Kuczera and Simon Field, offers some information on the US situation.


For some sense of the promise of internships, look at unemployment rates for younger people in the 15-24 across a number of countries. Of course, the lack of apprenticeships isn't the only reason, nor even close to the main reason, that youth unemployment is above 50% in Spain and Greece. But it's nonetheless intriguing that the countries with the lowest youth unemployment rates tend to be those with the highest share of apprenticeships. 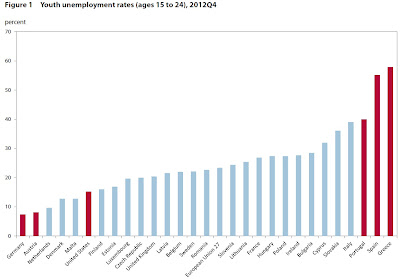 Most Americans seem to have a constricted view of apprenticeships: sure, they are fine for a few students that are entering the construction trades and not likely to flourish in a four-year college. But perspective is much too narrow. Apprenticeships can cover a wide range of possible jobs. Apprenticeships can build both specific job-related skills and also soft skills like showing up on time, ready to work. They can also help create connections between young people and the workforce at a time in history when the older connections--like following in the same career as your parents, or the friends of your parents--is clearly not working for many young people. And yes, for the substantial portion of U.S. students who aren't likely to flourish if they tried to follow the path of extending their formal education for four more years after high school, apprenticeships offer another path to skilled jobs with decent pay and prospects for career advancement. Here's some background from Aivazova on the situation in Germany and Austria (citations omitted):

"Apprentices typically spend one or two days a week in a vocational school where they are taught based on a federally agreed program of both general and occupation-specific instruction. The rest of the workweek is spent on the job, in a training program designed by the specific firm  in collaboration with education authorities, sector employers,  and employee organizations. Apprenticeships last two to four  years, depending on the profession, and are followed by a final  examination. In Germany, 59 percent of apprentices are then employed by the firm that trained them. Apprenticeships are  offered in over 300 occupations, of which 60 percent are in  the service sector and 40 percent are in industrial production ...

"In 2006, the  top two apprentice occupations in Germany were automotive mechanics and retail sales. In Austria, the most popular  apprentice occupations were retail trade, office work, and  heavy goods and automotive maintenance.  Retail trade and manufacturing are more likely to employ  youth, and apprentices in Austria and Germany are smartly  choosing to enter those sectors. Little wonder then that  German and Austrian youth, already professionally trained in  the sectors most likely to employ them, have an easier time finding work. ...

"To implement successful apprenticeship programs, governments should pass legislation to create nationally recognized  apprenticeship-completion certifi cates as well as regulate apprenticeship content to ensure quality and transferability of skills.  Apprentices should be given a stipend (typically one-third to  one-half of the wage of a regular employee in that sector) and  other benefits such as health insurance. ... Critical to  the success of apprenticeships is participation of labor unions and private businesses. To attract firms they must be given considerable autonomy in developing the on-the-job training components of apprenticeships. If necessary, firms can also be offered tax incentives and training subsidies."