My go-to source for budget deficit projections is the Congressional Budget Office, which has just released "The 2013 Long-Run Budget Outlook." Here's the long-run overview in one diagram, showing federal debt held by the public a a share of GDP during the history of the United States--and projected into the future. 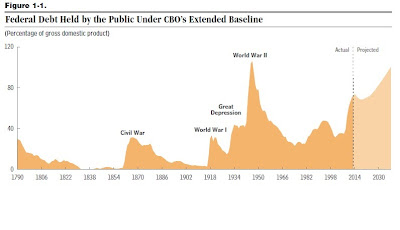 The figure illustrates a few overall patterns worth remembering. First, through most of U.S. history, spikes in the ratio of federal debt/GDP were related to wars: the Revolutionary War, Civil War, World War I, and World War II. Before the last few years, there were two other bumps in the debt/GDP ratio. One was the Great Depression. The other was the deficits of the 1980s. Second, the run-up in federal debt during the Great Depression and its aftermath has been quite steep, and the level of debt/GDP ratio we have reached has been exceeded in U.S. history only during World War II.

Of course, these facts do not make a case that the deficits of the last few years were improper public policy; indeed, given the depth of the Great Recession, it seems to me that large federal deficits for a few years were an appropriate response (although I have my disagreements with the specific spending and tax choices that were made). But the recession ended four years ago in June 2009. The pattern historical data, and the projections, do suggest that the federal debt is on a trajectory that makes it a legitimate reason for concern.

At several places, the CBO report rehearses the four main arguments for why a rising debt/GDP ratio can have negative effects. First, when the government borrows heavily, it can mean less financial capital available for private investment. Second, heavily government borrowing leads to high interest payments, which put pressure on the rest of the budget. Third, running high deficits now reduces the flexibility of the government to use high budget deficits in the future. (I sometime say: "The federal government can afford the big budget deficits associated with one Great Recession, but I'm not sure it can afford to pay for a second one.) Fourth, if the borrowing becomes very large indeed, there is a heightened risk of a financial runs and crisis.

The CBO report is full of details about the rationale behind its underlying "baseline" projections for all the different categories of federal spending and taxes. The main difficulty with the "baseline" projections (which are the ones shown above) is that they are based on the assumption that everything in current law will happen. However, Congress has become astute at gaming these projections, by inserting deficit cuts that are scheduled to take place in the future like cuts in the Medicare program to physician payment, and thus make the baseline debt projections appear lower, but then these cuts don't actually take place when the time comes. Thus, the CBO also looks at an alternative fiscal scenario that seems to me more realistic. This  "extended alternative fiscal scenario" assumes "that the automatic reductions in spending required by the Budget Control Act for 2014 and later will not occur (although the original caps on discretionary appropriations in that law are assumed to remain in place); that lawmakers will act to prevent Medicare’s payment rates for physicians from declining; that after 2023, lawmakers will not allow various restraints on the growth of Medicare costs and health insurance subsidies to exert their full effect; and that after 2023, federal spending for programs other than Social Security and the major health care programs will rise to its average percentage of GDP during the past two decades, rather than fall significantly below that level, as it does in the extended baseline."

In this scenario, "according to CBO’s central estimates, debt under the extended alternative fiscal scenario
would reach 190 percent of GDP in 2038—compared with 108 percent of GDP under the extended baseline ..."  These estimates are based on a model that reflects how the higher deficits will slow down the economy. According to the CBO central estimates: "when the deficit goes up by $1, private saving rises by 43 cents (so national saving falls by 57 cents), and foreign capital inflows rise by 24 cents, ultimately leaving a decline of 33 cents in investment ..."

The U.S. budget deficits are not some Sword of Damocles, hanging by a thread over the U.S. economy. Instead, they more resemble water erosion digging away at the base of a riverbank and making the land above unstable, or the process of aging and metal fatigue that eventually makes a bridge unsafe. The costs of sustained excessive government borrowing sneak up over time.