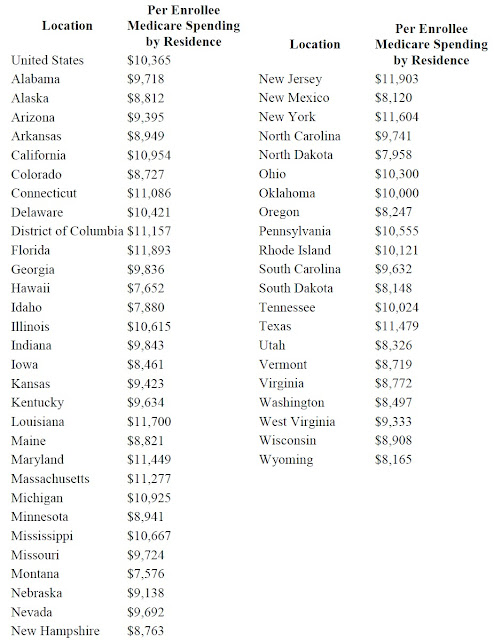 This well-known leads to some obvious questions: Can these differences in spending can be accounted for by differences in age, income, health status, or variations in the cost of health care across regions? Joseph P. Newhouse, Alan M. Garber, Robin P. Graham, Margaret A. McCoy, Michelle Mancher, and Ashna Kibria discuss the evidence on this question in "Variation in Health Care Spending: Target Decision Making, Not Geography," published by the Institute of Medicine (a part of the National Academy of Sciences) in July. The report can be read for free on-line, and the prepublication galleys can be downloaded here.

They look at Medicare data by "hospital referral region," or HRR, which can be thought of the geographic region in which most people are referred to a certain group of hospitals.  They report: "Recent reports
by the Dartmouth Institute for Health Policy and Clinical Practice and the Medicare Payment
Advisory Commission (MedPAC) estimate that unadjusted Medicare spending per beneficiary is
50-55 percent higher in HRRs in the highest quintile of spending relative to those in the lowest
quintile. Medicare service use (adjusted for demographics and beneficiary health) is approximately 30 percent greater in the highest quintile compared with the lowest ..."

The report also looks at variation across hospital referral areas (HRRs) after adjusting for patient demographics, health status, and also for the costs of health care inputs in that area. After these adjustments, here is a bar graph ranking the HRRs from lowest montly cost (Rochester, NY) to highest (Miami, Florida). They write: "Areas to the far left in Figure 2-5a have utilization roughly $50 to $150 below the adjusted national mean, whereas those on the far right have utilization roughly $100 to $200 above the adjusted national mean." 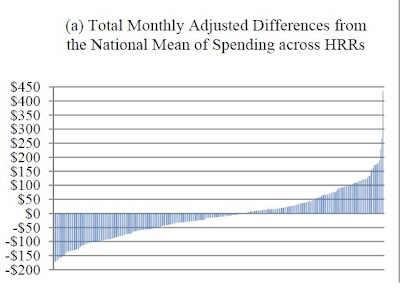 A close look at the underlying spending patterns reveals that 73% of this variation across the geographic areas is due to a single category of spending: specifically, spending for "post-acute care"--that is, the follow-up care after hospitalization--and most of the rest of the variation is due to variation in acute (inpatient) care.
These findings for Medicare are representative of a large literature showing that patterns of U.S. health care for all age groups vary considerably across cities and states. For example, the decision between heart surgery and treatment with blood pressure medications, or the proportion of mothers who have a C-section, or the choices about all kinds of minor surgery vary considerably across locations. There is often with no evidence that the area making the more expensive choice has better health outcomes, which suggests that if health providers in some areas could learn from those in other areas--or if health care reimbursement plans can be jiggered to reward certain choices and discourage others--overall health care costs could be reduced with little or no adverse effect on health.

But not much is known along these lines so far. As the Institute of Medicine report notes, "By creating the Center for Medicare and Medicaid Innovation, the ACA [Affordable Care Act] generated a thousand pilot demonstrations of new payment models. It is too early to know which of these models will prove to control health care costs and improve quality." Also, the author suggest: "Additionally, Congress should give CMS [Centers for Medicare and Medicaid Services] the flexibility to experiment with the mix of payment mechanisms, rates, and performance metrics that will align provider incentives with high-value care." Given that rising health care costs and the geographic variations in health care use have both been well-known for several decades, the fact that experimentation with different payment methods "to align provider incentive with high-value care" is really just getting underway seems to me rather disheartening.
Posted by Timothy Taylor at 6:00 AM