The World Trade Report 2013 from the World Trade Organization has the theme: "Factors shaping
the future of world trade," which in a number of ways turns out to be factors that will shape the future of the world economy as a whole. Here are some of the facts and themes that jumped out at me.

1) International trade plays a growing role in the world economy. Here's a figure showing the ratio of world exports of goods and services to world GDP. Trade rose sharply from less than one-fifth of world GDP in the mid-1980s to nearly one-third of world GDP in 2012--and world trade seems to have largely recovered from the dip during the Great Recession. 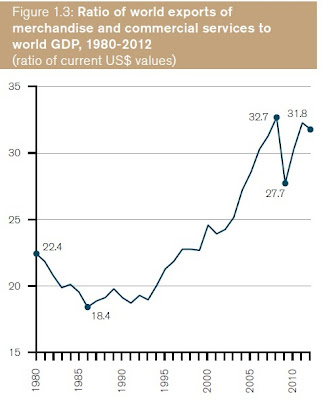 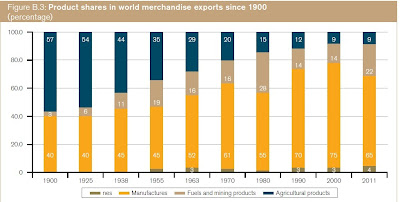 Perhaps at some point in the future, trade in services in the global economy will grow more rapidly than goods. But at least so far, this isn't true. In particular, the graph on the right shows the share of services in overall trade of goods and services, and it's not budging much.

3) Global manufacturing trade is mostly carried out by a small number of transnational corporations that often make direct investment in other countries as part of building global supply chains in which products are increasing produced in multiple stages across countries.

"With some notable exceptions, such as the major oil companies, firms that engaged in FDI [foreign direct investment]– that is, the ownership and management of assets in more than one country for the purposes of production of goods and services – were relative rarities before 1945. In the post-1945 period, however, FDI has surged, growing more rapidly than either production or international trade ... By 2009, it was estimated that there were 82,000 multinationals in operation, controlling more than 810,000 subsidiaries
worldwide. Upwards of two-thirds of world trade now takes place within multinational companies or their
suppliers – underlining the growing importance of global supply chains ... Manufacturing is increasingly managed through complex global supply chains – effectively world factories – which locate various stages of the production process in the world’s most cost-efficient locations ..."

Here's a table showing the share of exports from various countries that are accounted for by the largest exporters. For example, in the US economy, the top 1% of exporters account for 80% of all exports. In developing countries, a common pattern is that the top five exporting firms do about about 80% of the country's exports. 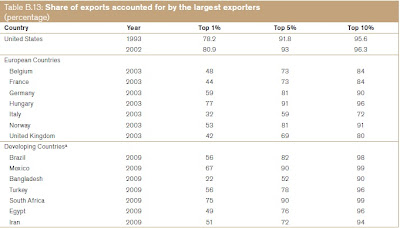 In a world of global supply chains,exports from one country embody and include imports from other countries. Thus, it is becoming increasingly important to measure global trade based on the value-added within each country, not on the total value of gross imports and gross 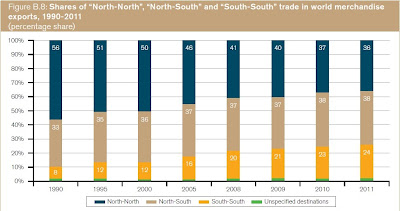 5) For decades after the late 1940s, the political focus of efforts to increase world trade looked at how to reduce tariffs. But that effort has been so successful that the more important trade barriers today are nontariff barriers, and how to reduce costs of  transportation. The report cites evidence that "transportation costs represent a greater barrier to trade than policy-induced obstacles, such as tariffs. At a price of US$ 100 per barrel of oil, they estimate transportation costs to be equivalent to an average tariff of 9 per cent, nearly double the WTO’s estimate of the average applied tariff." Transportation and communications infrastructure are likely to be especially important in building ties from the less-developed economies of the world to the global economy. For example, the report cites evidence that the continent of Africa has fewer kilometers of road now than it did several decades ago.

6) Many countries have seen increasing remittances from migrants. "Officially recorded migrant remittances to developing countries, estimated at US$ 406 billion in 2012, are now more than three times the size of ODA [official development assistance--aka, "foreign aid"]. Compared with other private capital flows, remittances have showed remarkable resilience during the recent financial crisis." Here's list of some of the countries where the level of remittances is equal to 20% or more of GDP. 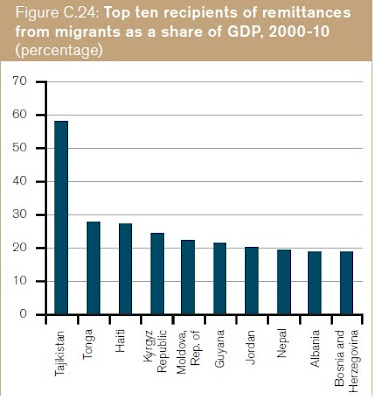 7) Comparative advantage has become more fluid. Classroom examples of the drivers of international trade tend to dwell on how identifiable products like cars and computers and oil and wheat are traded between countries, and how the key driver of trade is that it is relatively cheaper (in an opportunity cost sense) to produce certain goods in one country than in another. But with the changes in world trade, these sorts of examples do a less good job of representing what trade actually happens and what determines that trade. In a world economy where trade involves a supply chain of partially-completed intermediate goods, looking at examples of completed goods like cars and computers will miss some of the point. The locations of production will be determined by choices made by a relatively few large exporters about global production chains, and by their decisions about foreign direct investment. In turn, these decisions will be shaped by local investments in transportation and communications infrastructure, and in the other institutional, legal, and human capital support that a local economy can give to an international producer. These sorts of advantages are less related to wages, productivity, and natural resources in a static sense than in the common textbook examples. Instead, this is a sort of flexible comparative advantage that will often shift and change.