Global Supply Chains and the Changing Nature of International Trade

The World Investment Report 2013 from UNCTAD (the UN Conference on Trade and Development) is my go-to source for statistics about levels and trends of foreign direct investment. This year, Chapter IV offers an interesting additional essay on "Global Value Chains: Investment and Trade for Development. Here are a few points that jumped out at me.

The Preeminence of International Trade in Intermediate Goods

The textbook story of international trade, in which an easily identifiable product made in one country like cars, computers, textiles, oil, wine or wheat is traded for a similar good in another country is no longer a fair representation of the majority of world trade. "About 60 per cent of global trade, which today amounts to more than $20 trillion, consists of trade in intermediate goods and services that are incorporated at various
stages in the production process of goods and services for final consumption."

Here's a concrete example of trade in intermediate goods through a global value chain as it operates in Starbucks:

"For instance, even the relatively simple GVC [global value chain] of Starbuck’s (United States), based on one service (the sale of coffee), requires the management of a value chain that spans all continents; directly employs 150,000 people; sources coffee from thousands of traders, agents and contract farmers across the developing world; manufactures coffee in over 30 plants, mostly in alliance with partner firms, usually close to final market; distributes the coffee to retail outlets through over 50 major central and regional warehouses and distribution centres; and operates some 17,000 retail stores in over 50 countries across the globe. This GVC has to be efficient and profitable, while following strict product/service standards for quality. It is supported by a large array of services, including those connected to supply chain management and human resources management/development, both within the firm itself and in relation to suppliers and other partners. The trade flows involved are immense, including
the movement of agricultural goods, manufactured produce, and technical and managerial services." 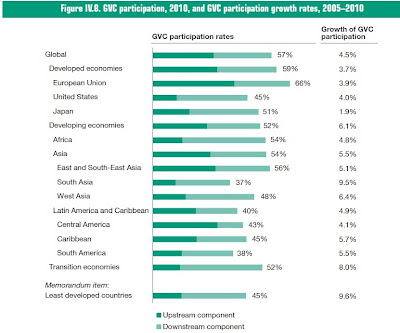 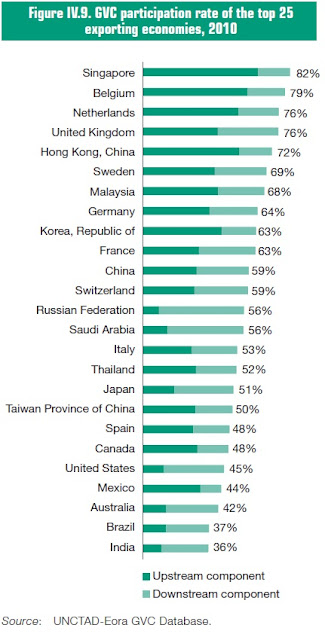 The Centrality of Transnational Corporations in International Trade

Global supply chains are typically coordinated by transnational corporations, often through making foreign direct investments in other countries (which is why it makes sense to have a discussion of global supply chains in a report focused on foreign direct investment). In fact, a relatively small number of transnational corporations are the organizations that coordinate and carry out the overwhelming majority of international trade, through some combination of owning foreign subsidiaries, contract manufacturing, franchising, or arms'-length buying and selling from local firms.

Clearly, global supply chains lead to prices for consumers in the importing countries that are lower than they would otherwise be--that's most of the reason that transnational corporations develop such chains. They also make profits for transnational corporations? But do the global supply chains help low- and middle-income countries develop? The answer depend several factors.

The overall pattern seems to be that participation in global value chains does in fact typically benefit economic growth and development, but there are a bunch of potentially difficult and important issues about treatment of workers, environmental effects, interactions with local institutions and the host government, ans so on.