The slow phase-in of the Patient Protection and Affordable Care Act of 2010, widely known as "Obamacare," is supposed to kick into a higher gear on October 1 when open enrollment begins in the "exchanges" that are one of the tools for expanding the share of the U.S. population with health insurance.  As law comes into effect, it's perhaps useful to take a step back from the day-to-day kerfuffles over the mechanics of implementation and look at the big picture. Why was it so widely perceived that a major reform of the U.S health care sector was needed?

There have been two main concerns about the U.S. health care sector for the last few decades. First, tens of millions of Americans lacked health insurance, which in turn raised concerns that they were receiving too little health care, or receiving it too late, or receiving it at costs that led to severe household financial stress. Second, the cost of health care had been rising faster than the size of the U.S. economy for decades. In the private sector, firms paying more for health insurance meant that less money was available for raises in take-home pay. In the public sector, the rising costs of Medicare, Medicaid, and health care costs for retired government workers were creating pressure in all the other parts of public budgets.

Sure, there were other concerns about the health care sector, like making health insurance companies play nice, or providing support for medical education and biomedical research. But addressing those sorts of concerns didn't require sweeping legislation to shake up the health care sector. How is the Affordable Care Act likely to perform on the two main issues of covering the uninsured and constraining the rise in costs?

Since well before the passage of the Act, it has been clear that it would not provide universal health insurance coverage. For example,here's a White House announcement in September 2010 predicting that the act would reduce the number of Americans without health insurance from about 50 million to about 18 million.
The Congressional Budget Office estimated last spring that the implementation of the Affordable Care Act would reduce the number of Americans without health insurance from 55 million in 2013 to 31 million in 2016, with most of that drop coming from people signing up for the new insurance "exchanges" and some coming from an expansion of Medicaid. But by 2023, there would still be 31 million uninsured. Here's a recent Washington Post story about those 31 million. So after all the tumult and the shouting over the Affordable Care Act, both, during and after its passage, its supporters optimistically expected it to solve about 60% of the problem of Americans lacking health insurance, and in fact it now seems likely to solve about 40% of that problem. 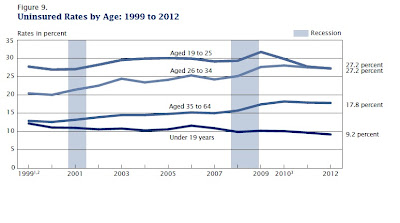 On the subject of restraining the rise in health care costs, the bottom line is that when a piece of legislation is promising to expand substantially the amount of health care that people will be able to consume, it is going to increase costs, at least in the short run. Again, this was openly admitted by those who advocated the act. Their argument was that although health care costs would rise in the short run, various cost-controls built into the legislation would help constrain the rise in costs in the longer run. As one example of such claims, here's Jonathan Gruber making this case in 2010 in the New England Journal of Medicine. But while the Affordable Care Act does include many pilot projects and experiments that seek to hold down health care costs, the effect of these projects is not yet known. But not much is known along these lines so far. As a report earlier this summer from the Institute of Medicine at the National Academy of Sciences reports, "the ACA [Affordable Care Act] generated a thousand pilot demonstrations of new payment models. It is too early to know which of these models will prove to control health care costs and improve quality."

It does seem that the rate of increase in health care costs slowed down in the United States, and in a number of other countries around the world, starting in about 2003. But a paper just published in the most recent Brookings Papers on Economic Activity by Amitabh Chandra, Jonathan Holmes, and Jonathan Skinner asks "Is This Time Different? The Slowdown in Healthcare Spending." They "predict that health care costs
will grow at GDP plus 1.2 percent for the next few decades; lower than previous estimates but
still on track to cause serious fiscal pain for the U.S. government and employees who bear the
cost of higher premiums in the form of lower wages." Thus, even with the recent slowdown in health care costs taken into account, the most recent Congressional Budget Office report looked at future health care costs this way: "Although the growth of health care spending has slowed recently, CBO projects that spending per enrollee in federal health care programs will continue to increase at a faster pace than per capita GDP. However, the difference between those two growth rates will be smaller than its average of recent decades, CBO projects." Here are the estimates from the CBO projecting continued rapid growth in federal spending on health care programs as a share of GDP. 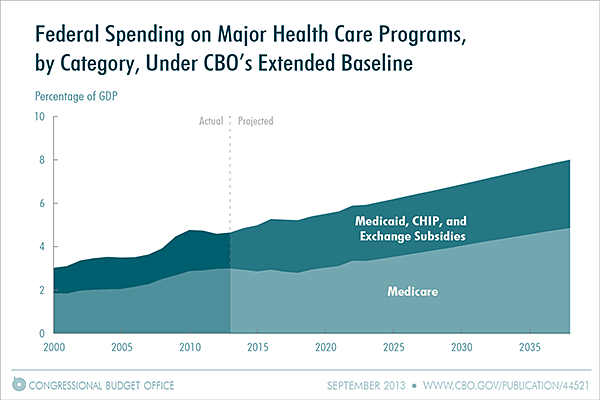 
One main aspect of Bush's plan was based on the idea that instead of having some people get health insurance tax-free, through their employer, while others need to buy insurance out of pocket, everyone who purchased health insurance would get the same standard deduction. As the plan was explained:
The notion of Bush's was that treating health insurance as taxable income, while providing a limited the deduction, would tend to put downward pressure on more expensive "Cadillac" insurance plans. It would also mean that those who get insurance through an employer would not be favored over those who need to buy their own insurance. In addition, Bush's plan included a planned reallocation of federal income to states, so that states could subsidize health insurance for those with low incomes. At least by some admittedly partisan estimates, Bush's plan could have outperformed what the Affordable Care Act is likely to achieve in terms of reducing the number of uninsured and slowing the growth of health care costs. Here's an overview of what happened with the Bush proposal, which garnered supportive comments from some unexpected places like the Urban Institute and the Washington Post editorial board, but was pronounced "dead on arrival" by Congressional Democrats.

My point isn't to carry water for the Bush plan, which had its own set of issues, and probably would have had even more issues if it has been masticated by Congress. My point is that political obstruction on health care policy is a bipartisan habit. But for better or worse, America's efforts to reform its health reform system are in fact beginning with the Patient Protection and Affordable Care Act. Additional health care legislation is virtually certain to be needed; indeed, the air is already thick with waivers and missed and postponed timelines. My hope is that at least some supporters of the bill can admit that parts of it badly need changing or even expunging, and at least some opponents can admit that parts of it are worth keeping.