Breaking Down the Falling Labor Share of U.S. Income

The labor share of national income is falling, both in the U.S. (see here and here) and around the world (see here and here). One useful way to gain understanding on this issue is to break down the different components of labor and capital income and see what's driving the change. The Congressional Budget Office provides a useful overview of this approach with U.S. data in its July 2013 report, "How CBO Projects Income." 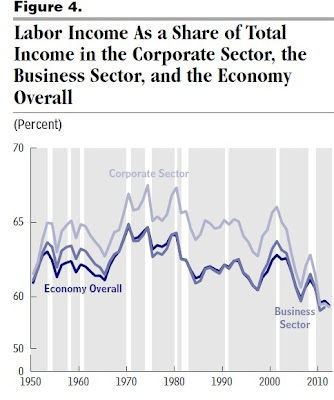 The figure also shows that the big drop in labor's share of income has occurred in the corporate sector.

Why has the fall been so large in recent years? Clearly, the depth of the Great Recession and the sluggishness of the economy since the end of the recession in 2009 make a difference to what labor is receiving. The typical pattern is is that labor income tends to rebound as an economy recovers, but the recovery has been so listless that labor's share has stayed low.

But there are also concerns that the decline in labor's share of income may be a more long-term phenomenon, tied to technology and globalization. Here's the CBO comment (footnotes leading to citations of research on these points omitted):

"For example, technological change may have reduced the returns to labor relative to capital in several ways: By expanding options for employing capital in place of labor (such as through automation); By reducing the relative price of capital goods, especially those used for communications and information processing; and By increasing the pace at which skills tied to old technologies become obsolete, thereby reducing the productivity of workers whose skills are not up to date. Moreover, technological change has increasingly contributed to the globalization of markets for services as well as for goods. At the same time, globalization of labor and product markets may have increased the returns to capital relative to labor by enabling the United States to specialize in the production of goods and services that require the capital inputs that it has in abundance relative to most other countries.Globalization may have also eroded the bargaining power of workers by increasing the mobility of capital.

Here are a few other aspects to the labor-share-of-income story. One is that the roughly constant labor share of income from 1950 to about 2000 may be a bit misleading in some ways, because it was actually made up of some offsetting trends.

The relative stability of the overall labor share between 1950 and 2000 reflected in large part the offsetting effects of changes in the sectoral composition of the economy. Expansion of the nonprofit sector, which includes most hospitals, for example, put upward pressure on the labor share because that sector is labor-intensive and has a high labor share of income. In contrast, growth of income generated by owner-occupied housing, which represents the bulk of income generated by the household sector, increased the income going to capital and put downward pressure on the labor share of income.

As the second arguments here notes, the drop in labor income as a share of GDP can also be viewed as a rise in capital income as a share of GDP. Moreover, in the economic statistics behind these calculations, owner-occupied homes are treated as if they were rental businesses, with those who own the home acting as "landlords" who rent the home to themselves. The value of living in the home that you own (which is estimated or "imputed" by the government statisticians) is treated as capital income.As CBO explains: "That imputed net rental income is recorded in the NIPAs [National Income and Product Accounts] as the difference between the value generated from housing services and expenses such as mortgage interest, maintenance and repairs, property insurance premiums, property taxes, and depreciation."

Here's the pattern of "Rental and Royalty Income of Persons since 1950. Clearly, most of fluctuation in the last 40 years is related to  this imputed "household rental income" from those living in homes that they own. Compared to the period from the mid-1970s to the early 1990s, this factor can help to explain why capital income is about 1% of GDP higher, and thus why the labor share of income is lower. (The drop around 2006 is presumably due to the drop in housing prices at about that time.) 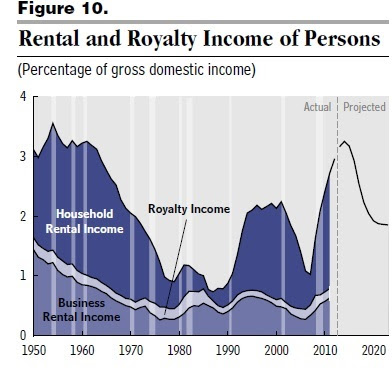 "Consumption of fixed capital," perhaps better known as depreciation, is another reason why the capital income share has risen over time. From the government statistician point of view, the value from using up or wearing down fixed physical capital is a form of capital income. CBO explains: "Consumption of fixed capital
has grown as a share of GDI since the mid-1970s, largely as a result of the shift in investment spending toward assets with shorter service lives (especially computers, communications equipment, and software) and thus higher rates of depreciation." Again, this factor can help to explain why the capital share of total income is larger and the labor share of income is correspondingly smaller. Finally, a big share of capital income is profits to firms. Profits fluctuate a lot year to year, but if you squint a bit at this figure, it looks as if there is an overall downward tend in profits from the 1950s to the 1970s, and then an upward trend in profits since then. Of course, higher profits being earned by firms can also be explained to some extent by the opportunities opened up by technology and globalization discussed earlier. 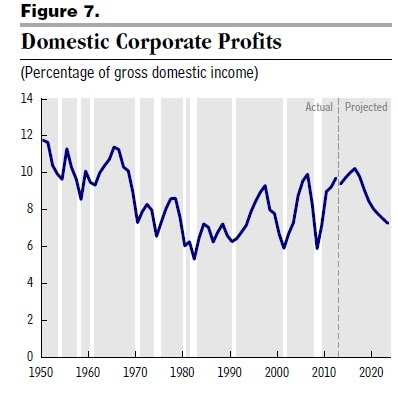 From all of this, here are a few take-away thoughts: The labor share of income in the U.S. economy is historically low. Some of this will self-correct as employment gradually rises again. Some of  it is due to change in technology and globalization that have raised the return to capital and put downward pressure on the pay of substantial groups of workers. Some of the fall in labor's share of income is due, in a statistical sense, to less-discussed factors affecting capital income like a rise in recent decades in the value of living in a home that you own, and to the fact that capital investment in information technology has a shorter life and depreciates faster than past capital investment.