When Family and Friends Don't Help

Heading into the Great Recession, many people thought they had family and friends upon whom they thought they could draw for support. But when the crunch hit, the support wasn't there. Here's the evidence drawing from a short paper by Julie Siebens of the U.S. Census Bureau in "Extended Measures of Well-Being: Living Conditions in the United States: 2011."

The Survey of Income and Program Participation, on which this data is based, asks (among other questions) about a list of nine possible hardships: 1) difficulty meeting essential expenses; 2) not paying rent or mortgage; 3) getting evicted; 4) not paying utilities; 5) having utilities cut off; 6) having phone service cut; 7) not seeing a doctor when needed; 8) not seeing a dentist when needed, or 9) not always having enough food.
In 2011, 6% of US families reported experiencing three or more of these hardships. In the lowest quintile of the income distribution, 12.2% reported experiencing three or more of these hardships. 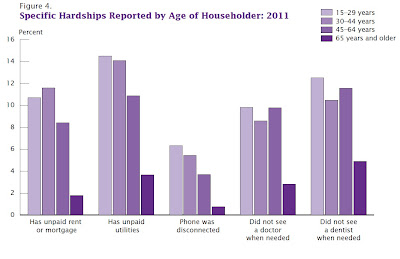 But what jumped out at me was the follow-up figure: Of those who experienced hardships, what were their expectations about how much they could rely on family and friends, and to what extent were those expectations met? 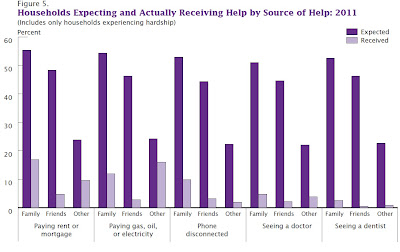 The common pattern is that about half of households expected that family or friends could help. But in fact, a much smaller proportion actually received the help they had expected. It would take a fine novelist or playwright to do justice to the underlying stories of disappointment behind these graphs. In some cases, people probably had unrealistic expectations of how much their family and friends were willing to help out. In other cases, it's probably the case that family and friends were also being hit by economic bad news of their own, and weren't in any position to help out.

In economic and social terms, the Great Recession is not nearly as severe as the Great Depression of the 1930s. But in somewhat the same way that the Great Depression cast a dark shadow over political attitudes that lasted for years, I suspect that the Great Recession will leave its own lasting shadows. For more than five years now, Americans experiencing a society in which jobs were hard to come by--whether for themselves or for their friends, family, and neighbors--and a society in which family and friends didn't prove able to help each other in the ways that had been expected.