A Decline in On-the-Job Training

A certain amount of job training happens through the basic experience of showing up for work everyday. But in some cases, more specific training is called for, which can either be sponsored or provided by an employer, or by the worker. Here's some evidence from the recently released 2015 Economic Report of the President, by the Council of Economic Advisers, showing a decline in employer-provided and on-the-job training in recent decades. This data is collected only irregularly, when the Census Bureau decides to include the "module" that includes this particular set of questions. But with the most recent data in 2008, it seems pretty unlikely that employer-provided and on-the-job training have risen in the aftermath of the Great Recession. 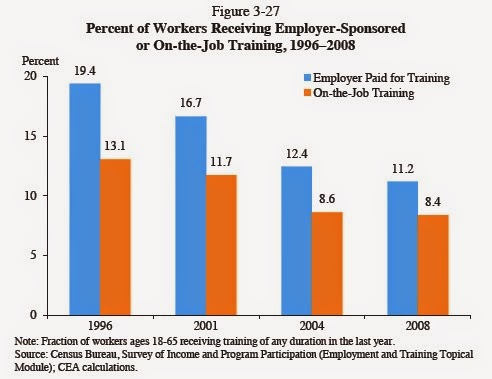 The economic theory of job training is built on a distinction between company-specific skills, which are of much greater use to a specific employer, and general-purpose skills, which can be used with a variety of employers. In an economy where people can move fairly easily between jobs, employers will be willing to pay for company-specific training--that is, training that is mainly relevant to learning about what is done at that particular company, and would be of less use at other companies. If employers know that employees are likely to remain with the firm for a substantial time, then employers become more willing to pay for general-purpose training, because it is more likely to pay off for the firm. Otherwise, people will have to pay for general-purpose training, which could be used at other companies. In some cases, workers may "pay" for their general purpose training by taking a job that offers lower wages, but offers a systematic training program.

Thus, types of skills, who pays for them, and how they are paid for can be sliced various ways. But just looking at the overall pattern, a decline in employer-sponsored and on-the-job training suggest that workers who wish to keep building their skills are getting less support from their employers.