It's fairly well-known that US labor force participation--that is, the share of U.S. adults who are classified either employed or unemployed--has been dropping. But it's not always recognized how the U.S differs from other high-income economies in this trend, or how

The 2015 Economic Report of the President, released last week by the White House Council of Economic Advisers, offers some striking evidence on these points. The top figures shows labor force participation rates for "prime-age males," who fall into the 25-54 age category. The nice thing about looking at this group is that countries may differ considerably in their patterns of the extent to which students attend school into their early 20s, or the extent to which people retire in their late 50s and early 60s. Looking at the "prime-age" group leaves these ages out of the picture. 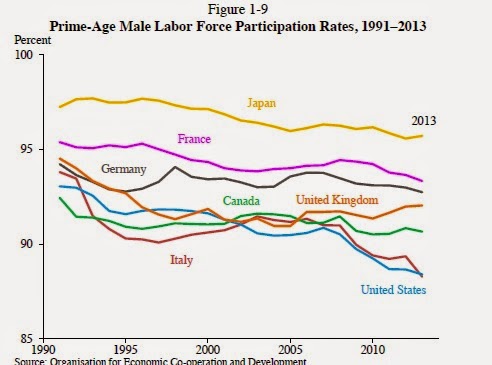 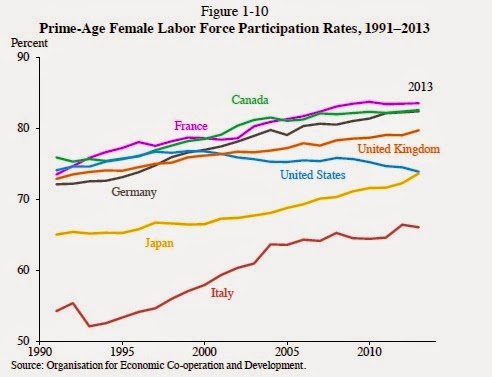 The Council of Economic Advisers sums up the cross-country patterns in this way: 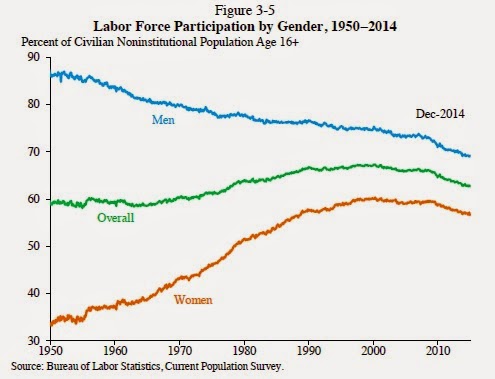 When combining the cross-country data, the time series data, and the depth of the Great Recession, the report argues that the decline in labor force particpation rates in recent years is pretty well explaiued. The CEA writes:


Between 2007 and 2012 the decline in participation is fully (and at some points more than fully) explained by the aging of the population and standard business-cycle effects. Beginning in 2012, however, the labor force participation rate decline began to exceed what was predicted from aging and cyclical factors. Since late 2013, the labor force participation rate has stabilized and the portion of the decline that was unexplained shrank, albeit slowly, between the second and fourth quarters of 2014 ...


What explains the "residual" factor in the figure below? Part of it is probably due to a gradually lower rate of labor force participation within US age groups (like the evidence on prime-age workers given above), while another part is surely due to the fact that the Great Recession was so severe that it "led to a greater-than-normal cyclical relationship between unemployment and participation." 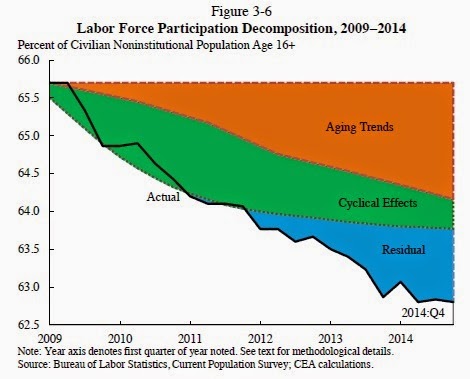 Whatever the reasons, as the U.S. economy looks ahead to the next few decades, figuring out ways so that the decline in labor force participation can be stabilized and reverse is an important goal of public policy.