The Journey to Becoming a School Reformer

Roland Fryer offers an insightful and charming essay about his journey to becoming a K-12 school reformer in "21st Century Inequality: The Declining Significance of Discrimination," appearing in the Fall 2014 issue of  Issues in Science and Technology. This is an edited version of the Henry and Bryna David Lecture, which Fryer delivered at the National Academy of Sciences on April 29, 2014.
Video and powerpoint slides from the actual lecture are available here.

As Fryer tells the story, he was "asked in 2003 to explore the reasons for the social inequality in the United States." He looked at data from the "National Longitudinal Survey of Youth, focusing on people who were then 40 years old." He looked at the raw differences in averaged outcomes between blacks and whites on a number of dimensions. Then he adjusted the data for the test scores of the 40 year-olds back when they were eighth-graders---essentially, this means comparing blacks and whites who had the same test scores back in eighth grade. Remarkably enough, the wage gap between black and white 40 year-olds essentially disappeared after adjusting for eighth-grade test scores. On average, blacks were less likely to attend college than whites, but after adjusting for eighth grade test scores, blacks were more likely to attend college. A number of subtantial black-white differences remained after adjusting for eighth-grade test scores, but the size of such differences was diminished.

Here's one of Fryer's slides from his talk, showing the average black-white differences, and then the differences after adjusting for eighth-grade test scores. 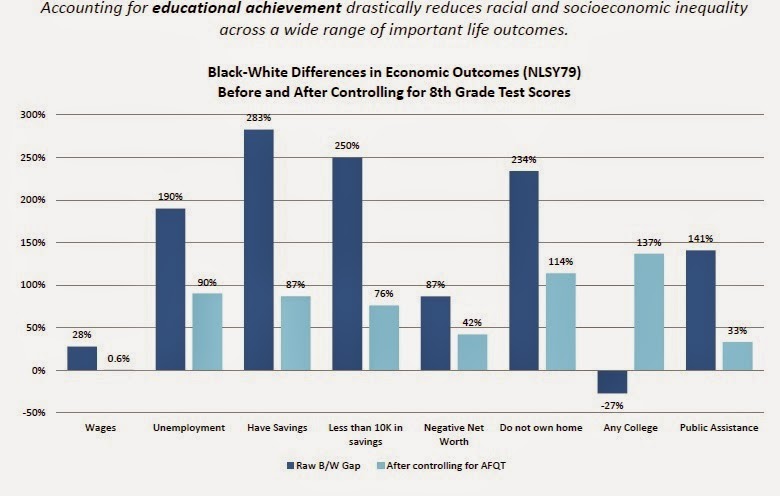 Fryer describes his reaction in this way:

"In two weeks I reported back that achievement gaps that were evident at an early age correlated with many of the social disparities that appeared later in life. I thought I was done. But the logical follow-up question was how to explain the achievement gap that was apparent in 8th grade. I’ve been working on that question for the past 10 years. I am certainly not going to tell you that discrimination has been purged from U.S. culture, but I do believe that these data suggest that differences in student achievement are a critical factor in explaining many of the black-white disparities in our society. It is no longer news that the United States is a lackluster performer on international comparisons of student achievement, ranking about 20th in the world. But the position of U.S. black students is truly alarming. If they were to be considered a country, they would rank just below Mexico in last place among all Organization of Economic Cooperation and Development countries."

The next question is when did black students start falling behind. Fryer writes:

When do U.S. black students start falling behind? It turns out that development psychologists can begin assessing cognitive capacity of children when they are only nine months old with the Bayley Scale of Infant Development. We examined data that had been collected on a representative sample of 11,000 children and could find no difference in performance of racial groups. But by age two, one can detect a gap opening, which becomes larger with each passing year. By age five, black children trail their white peers by 8 months in cognitive performance, and by eighth grade the gap has widened to twelve months.

It is remarkable to me that most of the cognitive performance gap for eighth-graders is already apparent for five year-olds. As I've commented on before in "The Parenting Gap for Pre-Preschool" (September 17, 2013), one possible reaction here is to think more seriously about home visitation programs for at-risk children in the first few years of life.  Another possible reaction is to think about expanding preschool programs for 3-5 year-olds, but at least some of the evidence on whether these programs have any lasting effect is rather discouraging (although the case is somewhat stronger for focusing preschool programs on at-risk children).

Fryer's approach has been to focus on how to improve school achievement, and as an economist, he began with a charmingly straightforward approach of paying students to read books and to pass tests. Here's a sketch of his longer description of what he did:

As befits an arrogant economist, my first thought was that this will be easy: We just have to change the incentives. ...  My solution was to propose that we pay them incentives now to reward good school performance.

Oh my gosh, I wish someone had warned me. No one told me this was going to be so incredibly unpopular. People were picketing me outside my house saying I would destroy students’ love of learning, that I was the worst thing for black people since the Tuskegee experiments. Really? Experimenting with incentives when nothing else seems to work is the equivalent of injecting people with syphilis without informing them?
We decided to try the experiment and raised about $10 million. We provided incentives in Dallas, Houston, Washington, DC, New York, and Chicago. We also, just for fun, added a large experiment with teacher incentives just to cover all our bases, to make sure that we had paid everybody for everything. ....

What we learned through this $10 million and a lot of negative press and angry citizens is that kids will respond to incentives—and that incentives to teachers do not have a significant effect on student achievement. They will do exactly what you want them to do. By the way, they don’t do anything extra either. I had this idea that they were going to discover that school is great and to try harder in all of their subjects, even those that do not provide incentives. No. You offer $2 to read a book, and they read a book. They are going to do exactly what you want them to do. That showed me the power, and the limitations, of incentives for kids."

So Fryer and fellow researchers began to study successful charter schools, like the Harlem Children’s Zone led by Geoffrey Canada, as well as some less successful schools. The team spent several years interviewing and videotaping, and came up with five rules to follow to close the academic achievement gap. Here are the five (from the slides accompanying Fryer's talks), with some comments from Fryer.

"Simple. Effective schools just spent more time on tasks. I think of it as the basic physics of education. If your students are falling behind, you have two choices: spend more time in school or convince the high-performing schools to give their kids four-day weekends. The key is to change the ratio. ... In the case of Harlem Children’s Zone’s Promise Academy, students have nearly doubled the amount of time on task compared to students in NYC public schools."


"For teachers, it is important that they receive reliable feedback on their classroom performance and that they rigorously apply what they learn from assessments of their students to what they do in the curriculum and the classroom."


"The third effective practice was what I call tutoring, but which those in the know call small learning communities. It is tutoring. Basically what they do is work with kids in groups of six or fewer at least four days per year."

"Even low-performing schools know that data are important. When I visited a middling school, they would be eager to show me their data room. What I typically found was wall charts with an array of green, yellow, and red stickers that represented high-, mid-, and low-performing students, respectively. And when I asked what has this led you to do for red kids, they would say that they hadn’t reached that step yet, but at least they knew how many there are.When I asked the same question in the data rooms of high-performing schools, they would say that they have their teaching calibrated for the three blocks. They would not only identify which students were trailing behind, but would identify the pattern of specific deficiencies and then provide remediation for two or three days on the problem areas. They would also note the need to approach these areas more diligently in future editions of the course."

"The icing on the cake was that effective schools had very, very high expectations of achievement regardless of their social or economic background.  ... The essential finding is that kids will live up or down to our expectations. Of course they are dealing with poverty. Of course 90% of the kids have single female head of households. They all have that. That wasn’t news. The question is how are we going to educate them?"

Maybe this five-step approach sounds too commonsensical and simple to work? Fryer's group managed to try out their approach in a group of 20 Houston public schools, including four high schools, with 16,000 students. Here were the results:

"When we began, the black/white achievement gap in the elementary schools was about 0.4 standard deviations, which is equivalent to about 5 months. Over the three years, our elementary schools essentially eliminated the gap in math and made some progress in reading. In secondary schools, math scores rose at a rate that would close the gap in in roughly four to five years, but there was no improvement in reading. One other significant result was that 100% of the high school graduates were accepted to a two- or four-year college."

These methods involved a lot of change at the schools involved, including changing a number of principals and teachers. But the same student body that had been dramatically underperforming was no longer doing so. Fryer draws the hard lesson explicitly. We know many of the changes that ccan be made to improve low-performing schools dramatically within a few years. The financial costs of these changes are manageable. But the school systems that need to be changed, and many of the people currently working in those systems, are not ready to make the needed changes. He says:

"It is not rocket science. It is not magic. There is nothing special about it.... We are now repeating the experiment in Denver, Colorado, and Springfield, Massachusetts. We actually do know what to do, especially for math. The question is whether or not we have the courage to do it."