How Much Deleveraging Has Happened?

The Great Recession of 2007-2009 was born in excessive debt. Of course, this statement strips away all manner of important details: the housing price bubble, subprime mortgages, collateralized debt obligations, credit rating agencies, affordable housing mandates, financial institutions bettign their companies on being able to roll  over huge amounts of very short-term financing every day, lax financial regulation, and more. While the manifestation of excessive debt happened in a particular way in 2007-2009, the general link between excessive debt and economic instability is a familiar story to economists. It's sometimes called a leverage cycle or a financial cycle. The basic notion is that when economic times are good, borrowing and risk-taking can rises to unsustainable levels, so that when times turn bad, the crash is especially hard.

Here in early 2015, how much has the U.S. economy and the world deleveraged--that is, reduced its debt? The McKinsey Global Institute tackles this question in a February 2015 report, Debt and (Not Much) Deleveraging, written by Richard Dobbs, Susan Lund, Jonathan Woetzel, and Mina Mutafchieva.

The amount of debt in an economy includes government, corporate, and household debt. Here's a picture of total debt by country. The horizontal axis shows the total debt/GDP ratio as of the second quarter of 2014. The vertical axis shows the change in the debt/GDP ratio from 2007 to 2014. Advanced economies are the yellow dots, while emerging and developing economies are the gray dots. 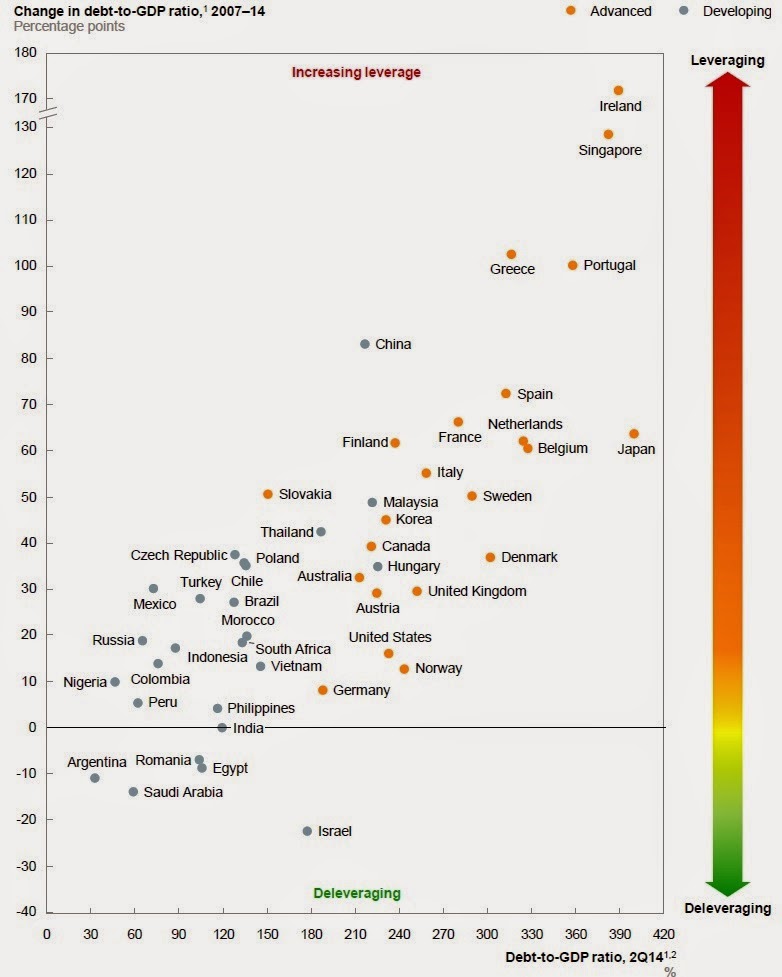 1) The countries with higher debt/GDP ratios (on the horizontal axis) are mostly advanced economies, while the countries with lower debt/GDP ratios are mostly emerging and developing economies. This pattern is somewhat expected. A eocnomy with very little debt is a country where financial markets are underdeveloped (Nigeria) or ill-functioning (Argentina). As per capita GDP rises in a country, the debt/GDP ratio also tends to rise, reflecting the development of financial markets. As the McKinsey report explains:

Some of the growth in global debt is benign and even desirable. Developing economies
have accounted for 47 percent of all the growth in global debt since 2007—and three-quarters of new debt in the household and corporate sectors. To some extent, this reflects
healthy financial system deepening, as more households and companies gain access
to financial services. Moreover, debt in developing countries remains relatively modest,
averaging 121 percent of GDP, compared with 280 percent for advanced economies. There are exceptions, notably China, Malaysia, and Thailand, whose debt levels are now at the level of some advanced economies.

2) Some of the the countries with the highest change in debt/GDP ratios (on the vertical axis) are the countries that, if you read the headlines, you would expect to be there: Ireland, Greece, Portugal, Spain.

3) Some of the countries with the highest levels of debt/GDP ratios and also the highest growth in debt are there in part because of their role as global financial hubs, like Ireland and Singapore. The report explains:


As a major business hub, Singapore has the highest ratio of non‑financial corporate debt in the world, at 201 percent of GDP in 2014, almost twice the level of 2007. However nearly two-thirds of companies with more than $1 billion in revenue in Singapore are foreign subsidiaries. Many of them raise debt in Singapore to fund business operations across the region, and this debt is supported by earnings in other countries. Singapore has very high financial-sector debt as well (246 percent of GDP), reflecting the presence of many foreign banks and other financial institutions that have set up regional headquarters there. Ireland has the second-highest ratio of non‑financial corporate debt to GDP in the world—189 percent in 2014. But this mostly reflects the attraction of Ireland’s corporate tax laws, which lure regional (and sometimes global) operations of companies from around the world. Foreign-owned enterprises contribute 55 to 60 percent of the gross value added of all companies in Ireland and, we estimate, at least half of Ireland’s non‑financial corporate debt.

Of course, the declines in household and financial sector debt in the U.S. economy are part of the reason for why the economic recovery has proceeded as such a sluggish pace. But the good news is after the excessive indebtedness of U.S. households and its financial sector back around 2007, real changes have occurred.

Posted by Timothy Taylor at 9:03 AM