The Rising Price of Anti-Cancer Drugs

Every now and then, you read a story about a very expensive prescription drug that seems to have a real but modest health benefits. A few years back, an anti-melanoma drug called ipilimumab (brand name Yervoy) became available for sale from Bristol-Myers Squibb. The price was  $120,000
for a full course of therapy, and the expected gain in life expectancy was four months. Are these examples just a few outliers? Is there a trend toward more expensive drugs? David H. Howard, Peter B. Bach, Ernst R. Berndt, and Rena M. Conti tackle this question in "Pricing in the Market for Anticancer Drugs," which appears in the Winter 2015 issue of the Journal of Economic Perspectives.

(Full disclosure: I've worked at the Managing Editor of JEP since the inception of the journal in 1986. All JEP articles from the most recent issue back to the first are freely available on-line courtesy of the American Economic Association, which funds the journal.)

Howard, Bach, Berndt, and Conti look at the 58 anticancer drugs approved for sale in the U.S. between 1995 and 2013. Before each drug is approved, various clinical trials and studies are done, and these studies provide an estimate of the median expected extension of life as a result of using the drugs. Then based on the market price of the drug when it is announced, it's straightforward to calculate the price of the drug per year of life gained. This figure shows, for the new anti-cancer drugs over the last two decades, how the the drug price per year of life gained has been rising over time. 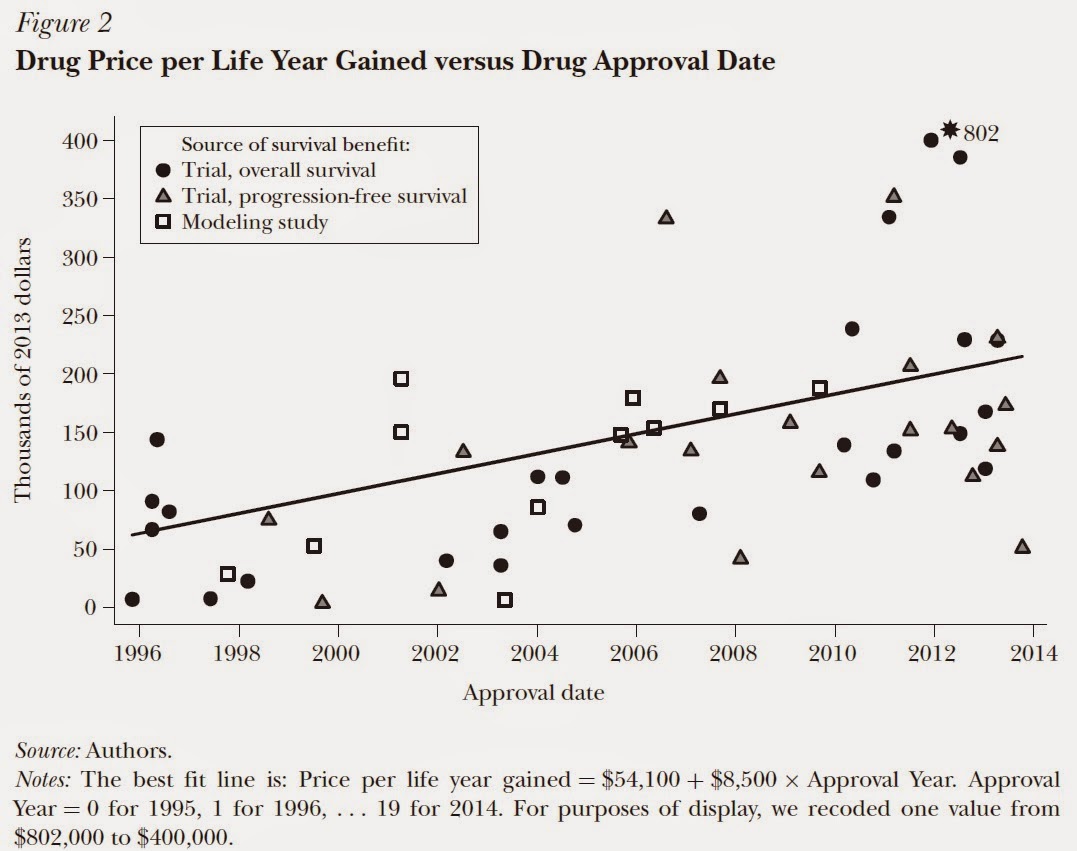 How can this kind of increase persist? The authors point out that Medicare or some other form of insurance is often paying for these drugs, so patients do not face the prices directly. Thus, one theory involves "reference pricing," in which each new drug is set a little higher in terms of cost per life saved than the previous one. The controversy fades over what seemed at the time to be  extraordinarily high price for certain drugs 10 or 15 years ago. The view of payers about what is "reasonable" to pay are pushed upward.

An alternative view points out that certain government programs now require that pharmaceutical companies sell discounted drugs to certain buyers (the "340B program"). When government-run health care providers in other countries negotiate prices with U.S. pharmaceutical manufacturers, they also seek to get a discount. For the drug manufacturers, if you know that a substantial part of your market is going to demand a "discount," then you have an incentive to set the initial price higher as a kind of benchmark for future negotiations--especially if you know that third-party payers in the U.S. will grumble and moan about that high price but eventually pay up.

The size of the U.S. market for anti-cancer drugs was $37 billion in 2013. I certainly have no objection to any person paying for these drugs themselves, or for people buying an insurance policy that will pay for these drugs if needed. But I also would have no problem with an insurance company offering a lower-priced policy with the explicit provision that it won't cover these very expensive drugs. And of course, one of the many discomfiting peculiarities of American health care policy is that on one hand we agonize over how to pay for helping those with low incomes receive adequate health insurance, while at the same time having a government program (Medicare) pay an amount that would cover health insurance for multiple families for a year for a drug that adds a few months to life expectancy.