In some broad sense, of course, we all know that this change is related to the extraordinary Federal Reserve quantitative easing policies of the last few years. However, Ben R. Craig and Matthew Koepke provide a useful bank's eye view of the tradeoffs for holding reserves, and how those incentives have changed, in "Excess Reserves: Oceans of Cash," an "Economic Commentary" published by the Federal Reserve Bank of Cleveland (February 12, 2015).

From a bank's eye view, the decision about whether to hold excess reserves above the legally required level involves evaluating a tradeoff: on one side, a need for liquidity; on the other side, the opportunity cost of holding reserves. As Craig and Koepke write: "Banks actively manage their reserves in order to balance their liquidity needs with the opportunity cost of holding reserves instead of interest-bearing assets. That is, banks measure the cost of carrying more reserves by comparing
what they might earn by parking the funds in an alternative asset (“forgone interest”) with the cost of last-minute borrowing to cover an unforeseen shortfall in reserves."

Before October 2008, the Federal Reserve paid no interest on excess reserves. If banks didn't have enough on hand for liquidity purposes, it was easy to borrow what was needed for a few days. In this setting, banks tried to hold hardly any excess reserves above the legal limit, and the level of bank reserves was quite stable. Craig and Koepke write:


"From 1959 to just before the financial crisis, the level of reserves in the banking system was stable, growing at an annual average of 3.0 percent over that period. This was about the same as the growth rate of deposits. Moreover, excess reserves as a percent of total reserves in the banking system were nearly constant, rarely exceeding 5.0 percent. Only in times of extreme uncertainty and economic distress did excess reserves rise significantly as a percent of total reserves; the largest such increase occurred in September 2001."

As the Federal Reserve responded to the Great Depression, it cut interest rates sharply in the economy as a whole and also starting paying interest rate on excess reserves. For banks, holding excess reserves now made economic sense. Craig and Koepke explain:

One reason for the increased marginal return of holding reserves is that the Federal Reserve now pays interest on all reserves. Since December 2008, the Federal Reserve has paid interest of 25 basis points on all reserves. Before the crisis, banks commonly parked their cash in the federal funds market for short periods. The interest rate in this market, hovering between 7 and 20 basis points since the crisis, has actually lagged the interest rate paid by the Federal Reserve for excess reserves ...  The marginal cost of excess reserves has also declined, when measured by the opportunity cost of other uses for the reserves. Other short-term parking places where banks commonly earned interest have experienced rate drops that make them less favorable. For example, since the Federal Reserve began to pay interest on excess reserves, three-month Treasury bills have yielded less than the Fed pays. Longer-term fixed-rate bonds are not an ideal option either, because they expose the holder to a duration risk. Duration risk is the risk associated with a scenario in which interest rates increase, depressing the price of the bond. Given that interest rates are already very close to zero, the balance of risks is weighted on the side of interest rates increasing rather than decreasing. Consequently, holding cash has the attraction of investing later, when interest rates go up. The risk-adjusted return on alternative assets is low compared to the return on excess reserves, and the benefi ts are high, giving banks an incentive to hold historically high levels of excess reserves.

In the bigger picture, what does it mean that banks are now holding much more in the way of excess reserves? Here are a few thoughts:

1) The everyday tools of monetary policy are about to shift. The old standard tools of monetary policy taught in every intro econ class--open market operations, altering discount rates, and adjusting reserve requirements--all depend on a banks that don't want to hold lots of excess reserves. When banks are holding a few trillion dollars in excess reserves, other policy tools are needed, and the Fed has already announced that monetary policy in the future will be conducted using the rate of interest that it chooses to pay on bank reserves as its primary tool for monetary policy, and secondarily by using its new reverse repo facility.

2) The financial balance sheet of the Federal Reserve has changed dramatically. Here's a figure from Craig and Koepke. Notice that in late 2007, the "Reserves" category in liabilities is almost invisible, because banks were not yet holding any substantial quantity of excess reserves. Since then, both bank reserves on the liability side and the combination of US Treasury securities along with Agency debt and mortgage-backed securities on the asset side have growth in tandem. One shorthand way to think about this is that the the Federal Reserve is creating money to buy the Treasury securities and the mortgage-backed securities from banks. As a result of these transactions, banks hold a lot of reserves and the Fed holds the debt. This is the mechanics of quantitative easing policies. 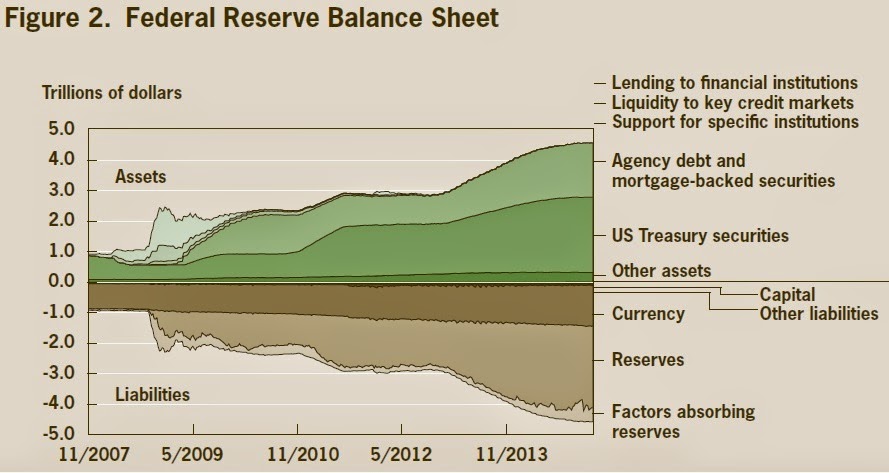 3) The Federal Reserve has the policy tools to manage a reduction in bank reserves over time. One occasionally hears a concern that banks will suddenly go on a lending spree, dumping their excess reserves into the economy in a way that could be inflationary or destabilizing in some other way. But if this is a problem, the Fed can simply raise the interest rate it pays banks on excess reserves, and the incentive for banks to put those reserves back into the economy would be reduced. But while it's easy to describe how it could work in theory, central banks don't have much experience with how to manage a gradual reduction in excess reserves--which will presumably need to happen over time as the Fed gradually holds less in Treasury debt and mortgage-backed securities. Craig and Koepke describe the problem this way:


In 1936, US banks’ reserves had accumulated to record levels. Although there had not been a dramatic increase in the levels of loans, the Federal Reserve decided to “play it safe” and reduce the flexibility of the banks’ options for using the cash by increasing the reserve requirement. Banks responded by dramatically reducing their loan portfolios. Milton Friedman and Anna Schwartz argued that this action caused the 1937 recession (A Monetary History of the United States, 1867-1960). So the Federal Reserve has no easy policy choices, particularly in the absence of a large body of accepted theory on how banks can be expected to handle their oceans of cash under changing
conditions. Perhaps the best thing to do is what they are doing, that is, to adopt an extremely watchful stance and wait.