Who are the Uber Drivers?

What kind of workers are driving for Uber? Jonathan V. Hall and Alan B. Krueger offer the first set of systematic answers to this question in "An Analysis of the Labor Market for Uber’s Driver-Partners in the United States," published as Working Paper #587 for the Industrial Relations Section at Princeton University (January 22, 2015).

(Full disclosure: Hall is the Head of Policy Research at Uber Technologies, and Krueger was paid by Uber for his work on this study. However, Krueger's contract also specified that he had “full discretion over the content of the report.” Fuller disclosure: Alan Krueger was Editor of the Journal of Economic Perspectives, and thus my boss, from 1996 to 2002.)

Here is some basic background. The number of Uber "driver-partners" who provided at least four paid trips in the previous month has now reached 150,000. In the context of this U.S. economy, this is about 0.1% of the workforce. But Uber is just one company, and the number is growing quickly. 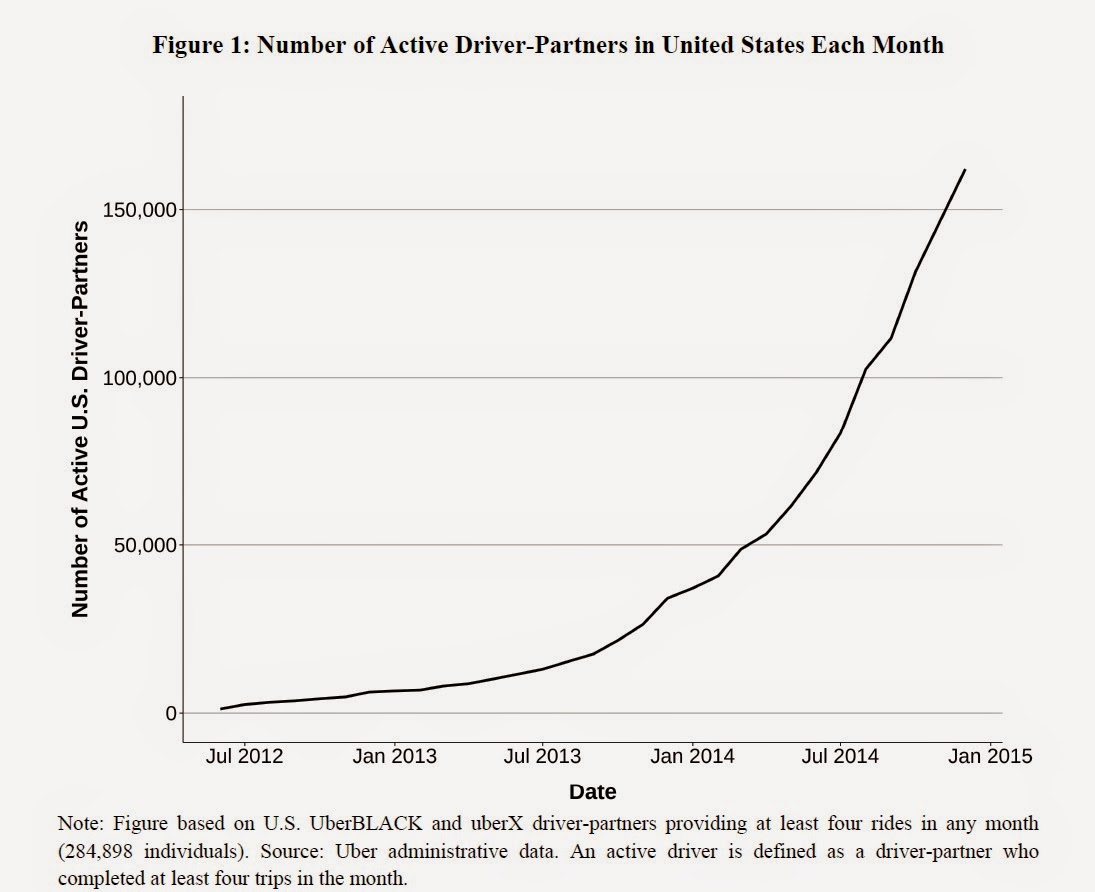 Here's a picture of Uber's growth by city. Clearly, it's a bigger presence in LA, SF, and NY. But the takeoff growth more recently in Miami and Houston is striking., 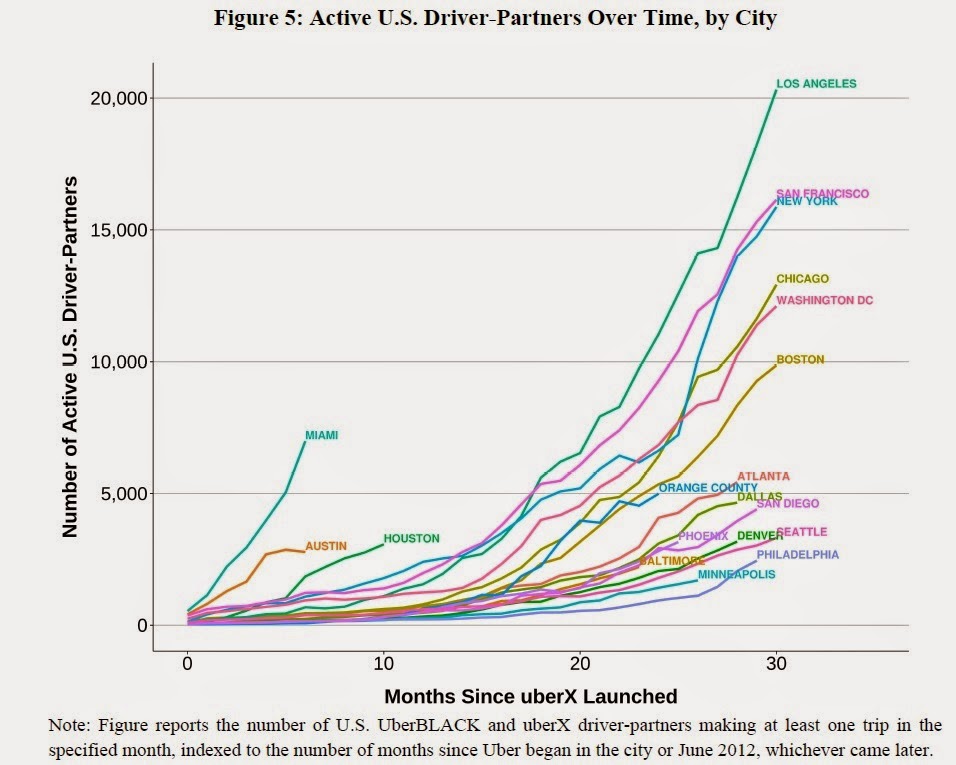 Most Uber drivers are part-timers: in most cities other than New York, a majority work less than 15 hours per week as Uber drivers, and only about 13-16% work more than 35 hours per week.  (Many have other jobs.) The hourly pay for being an Uber driver seems about the same regardless of how many hours you work. 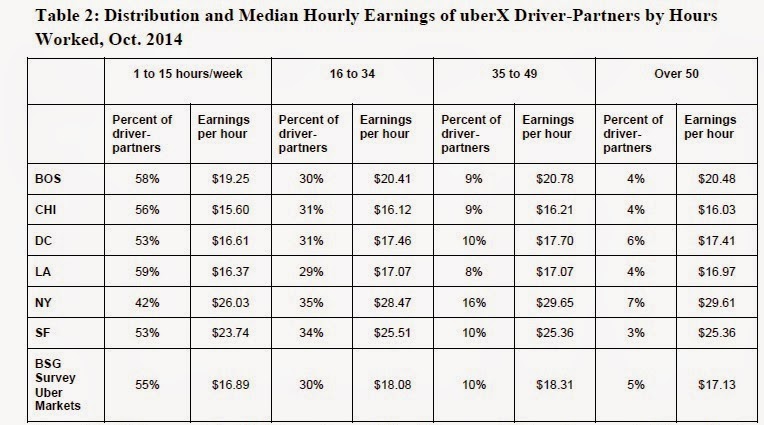 Hall and Krueger also provide some evidence to put the ongoing battles between current cab drivers and Uber drivers in context. Most cab drivers, for example, work full-time.

Comparing wages between Uber and  cab drivers is a little tricky, because the pay records for Uber don't take into account the costs of wear and tear on the car. But at least at a first approximation, it looks as if Uber drivers make more per hour. 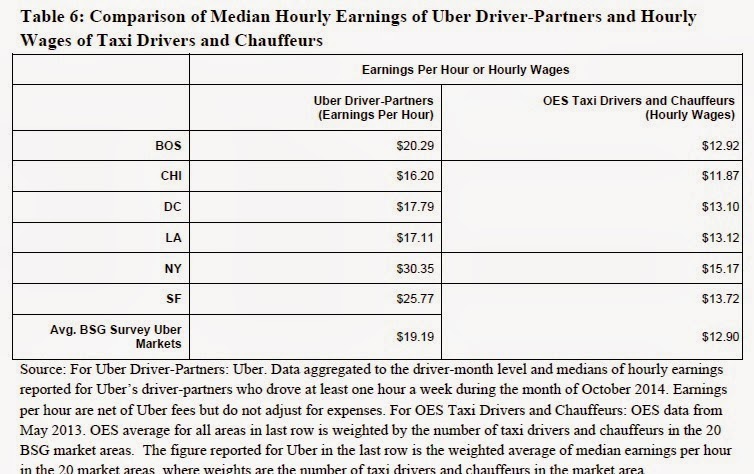 Overall, are companies like Uber and what is sometimes called "the sharing economy" contributing to an economy with greater inequality and instability? Or are they providing a flexible option that certain drivers and customers prefer? Hall and Krueger summarize the big picture arguments this way:

"[A]lthough some have argued that the sharing economy is weakening worker bargaining
power and responsible for much of the rise in inequality in the United States, the actual effect is much more complicated and less clear. First, there is little evidence of a secular rise in the percentage of workers who are self-employed, independent contractors, or part-time. ... Second, inequality increased dramatically in the United States long before the advent of the sharing economy, and has increased much less in many other countries that, unlike the United States, experienced a sharp rise in part-time work. Third, at least insofar as the advent of ride sharing services like Uber is concerned, the relevant market comparison is to other for-hire drivers, many of whom were independent contractors prior to the launch of Uber. Moreover, the availability of modern technology, like the Uber app, provides many advantages and lower prices for consumers compared with the traditional taxi cab dispatch system, and this has boosted demand for ride services, which, in turn, has increased total demand for workers with the requisite skills to work as for-hire drivers, potentially raising earnings for all workers with such skills. And finally, the growth of Uber has provided new opportunities for driver-partners, who ... seem quite pleased to have the option available."

As noted at the top, this research is co-authors by an Uber employee, so these positive conclusions are not unexpected--but the facts and analysis behind them are still worth consideration. It's seems safe to say that the labor market behind the "sharing economy" can't have had much macroeconomic effect so far, because it hasn't been big enough--but that situation could change a few years down the road.

I'll just close by adding that although "the sharing economy" is a widely used term, broadly meant to describe person-to-person sharing of resources, most economists I've run into gag on the term. Companies like Uber drive you where you want to go, for a price. Companies like Airbnb let you stay in someone's home or apartment, for a price. eBay had almost $1 billion in profits last year. This isn't "sharing." It's perhaps better called the "finding productive uses for underutilized capital" economy.