Buy Back Shares or Invest?

Much of this week I've been posting figures and snippets of analysis from the 2015 Economic Report of the President, written by the Council of Economic Advisers. Here's one more. Companies that have additional cash in hand after paying their expenses and dividends have several choices: among the choices, they can use the funds for investing to increase output or improve efficiency, or they can use the funds to buy back the company's own shares. Here's the pattern between these two choices over time. (Firms can also get funds for investment from other sources, like issuing bonds, so the two lines in the figure below don't need to sum to 100%.) 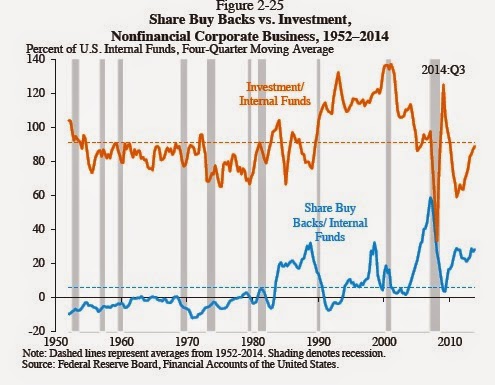 And here's the explanation from the Council of Economic Advisers:


Nonfinancial corporations spent a lower-than-average share of their internal funds (also known as cash flow) on investment during 2011 to 2013 (see Figure 2-25). Instead, these corporations used a good part of those funds to buy back shares from their stockholders. Share buybacks are similar to dividends insofar as they are a way for corporations to return value to shareholders. They differ, however, with regard to permanence: whereas dividend changes tend to persist, share buybacks are one-time events. (When firms raise investment funds by issuing new equity, the nonfinancial sector aggregate of share buybacks in the figures can be negative, as was common in the 1950s and 1960s.) The decline in the invested share of internal funds from 2011 to 2013, together with the rise in share buybacks, suggests that firms had more internal funds than they thought they could profitably invest. As can be seen in Figure 2-25, the investment outlook appears to have improved in 2014, and the investment share of internal funds has rebounded to near its historical average. Share buybacks, however, remain high.

I'll only add that one of the major conundrums for the U.S. economy during the slow recovery since the Great Recession has been the issue of "Sluggish U.S. Investment" (June 27, 2014). Many firms were earning high profits, but as they saw it, the most productive option for using a substantial share those profits during the last few years apparently was not to invest in the higher efficiency and output.