A little while back, I was discussing with a student about how or in what ways the U.S. economy would be affected by economic events in China. For a child of the 20th century, like me, the entire discussion was a little surreal. For the first nine-tenths of the 20th century, it would have been irrelevant to the point of ridiculousness even to ask how China's economy would affect the United States. But here in the 21st century, that question will take increasing importance.

Comparing the size of economies that have different currencies and very different standards of living is an inexact business, but the overall size of China's economy is at least second in the world now, and heading for largest. The 2015 Economic Report of the President, just released by the White House Council of Economic Advisers, offers a bit of discussion about how China's economic growth is proceeding.

First of all, China's rate of economic growth has slowed a bit, down to a "mere" 7.5% per year. This s down from the boom years of the mid-2000s, but it's similar to China's rate of growth in the 1990s. A quick reminder: at a 7.5% rate of growth, the size of China's economy doubles in a decade. 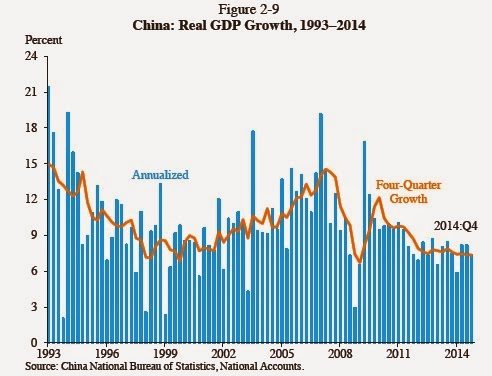 Along with the slower rate of growth, the other big concern about China's economy is whether it is experiencing its own version of a credit bubble. Here's a figure showing the credit flowing to nonfinancial corporations and households (that is, government debt is not included, and borrowing by the financial sector isn't included). Notice that the vertical axis here is the size of GDP--and the size of China's GDP is roughly similar to that of the United States or that of the euro area. China's economy has seen a remarkable burst of credit in the last six or seven years. Indeed, China stands out from all other emerging economies for its combination of high debt/GDP ratios and a very rapid rise in debt in recent years. 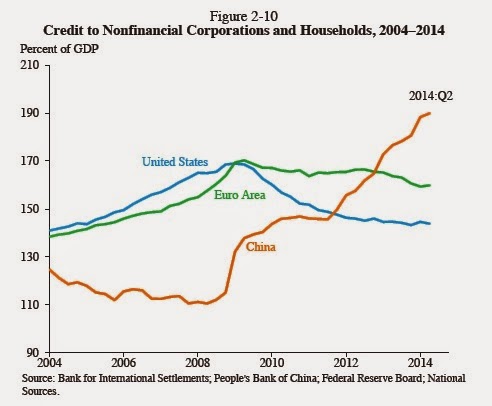 What level of concern is appropriate for this combination of growth slowdown (albeit still to a fairly rapid pace) and credit boom in China? Here's what the Council of Economic Advisers has to say:

China’s economy grew 7.3 percent during the four quarters ended in the fourth quarter of 2014, down from an annualized rate of 9.2 percent in the eight quarters ended in the fourth quarter of 2011 (Figure 2-9). Both the IMF and the World Bank have downgraded their projections for Chinese growth in 2015 to a rate below 7.5 percent, which until recently was thought to be the Chinese authorities’ target rate.

China may face stresses in adapting to a slower rate of expansion. In May, President Xi Jinping reportedly suggested that the Chinese “… must boost our confidence, adapt to the new normal condition based on the characteristics of China’s economic growth in the current phase and stay cool-minded.” One concern is the growth in credit to nonfinancial corporations and households, much of which has been channeled through the so-called shadow banking sector (which undertakes risky bank-like functions, but outside the government-regulated part of the financial sector). As shown in Figure 2-10, credit growth in China since 2008 has increased faster than in many developed countries. An initial surge in 2009 was seen as an aggressive response to the global financial crisis, in line with expansionary policies around the world. The renewed boom in credit since 2012, however, has raised worries about the rapid expansion of the unregulated shadow banking sector and a bubble in real estate prices. The government has responded with a number of policy measures to limit lending activities outside of the traditional banking sector. Property price gains have moderated, however, and prices began to fall in 2014, even in larger, wealthier cities where in the past demand has typically outstripped supply. There is growing concern about overbuilding because contraction in the construction sector would further depress aggregate growth and could cause financial instability.

A further economic slowdown in China would have ramifications for the global economy and, in particular, for low- and middle-income countries. Trade between China and other emerging BRICS economies (Brazil, Russia, India, and South Africa) has expanded since 2000. China is now the top export destination for 15 African countries, 13 Asian economies, and 3 Latin American countries. If demand in China slows, exports to China would decline, broadly dampening emerging-economy growth. Since mid-2011, the other BRICS countries have suffered declining terms of trade (the relative price of a country’s exports compared with its imports). This decline is accounted for in large part by falling prices of commodities and raw materials, to which China’s slowdown is a major contributor.

Posted by Timothy Taylor at 7:30 AM