There's a bubbling controversy over the "secular stagnation" hypothesis that investment levels are not only low, but likely to remain low. I've posted some thoughts on the controversy here and there:


I'm sure I'll return to the disputes over secular stagnation before too long, but for now, I just want to lay out some of the evidence documenting the investment slowdown. Such a slowdown is troublesome both for short-term reasons, because demand for investment spending is part of what should be driving a growing economy forward in the short-run, and also for long-term reasons, because investment helps to build productivity growth for increasing the standard of living in the future. The IMF asks "Private Investment: What's the Hold-Up?" in Chapter 4 of the World Economic Outlook report published in April 2015. Here's a summary of some of the IMF conclusions:


I'll just add a couple of figures that caught my eye. Here's the breakdown on how much investment levels have fallen below previous trend in the last six years across advanced economies. The blue bars show the decline relative to forecasts made in spring 2004; the red dot shows the decline relative to forecasts made in spring 2007. These don't differ by much, which tell you that that the spring 2004 forecasts of investment were looking fairly good up through 2007. The dropoff in investment for the US economy is in the middle of the pack. 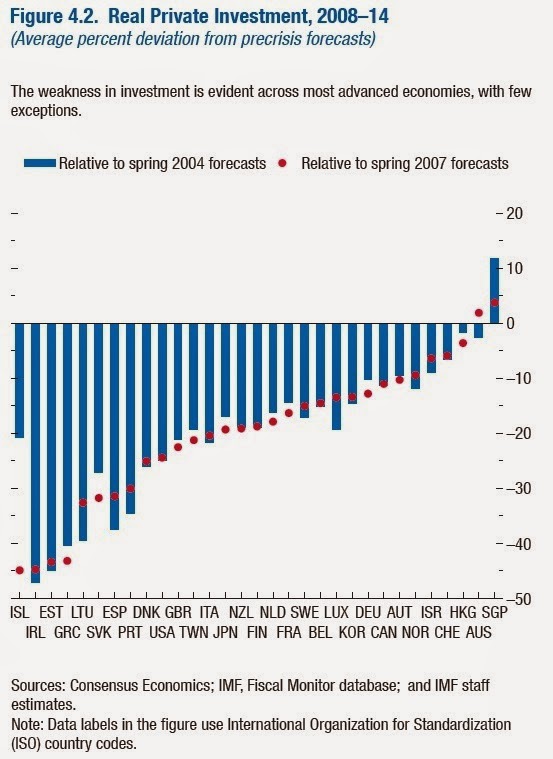 It's also interesting to note that the cost of equipment has been falling over time, driven in substantial part by the fact that a lot of business equipment involves a large does of computing power, and the costs of computing power have been falling over time. Indeed, one of the arguments related to secular stagnation is that the decline in investment spending might in part be driven by the fact that investment equipment is getting cheaper over time, so firms don't need to buy as much of it. An alternative view might hold that as the price of business equipment falls, then firms should be eager to purchase more of it. Again, I won't dig into those arguments here, but the pattern itself is food for thought. 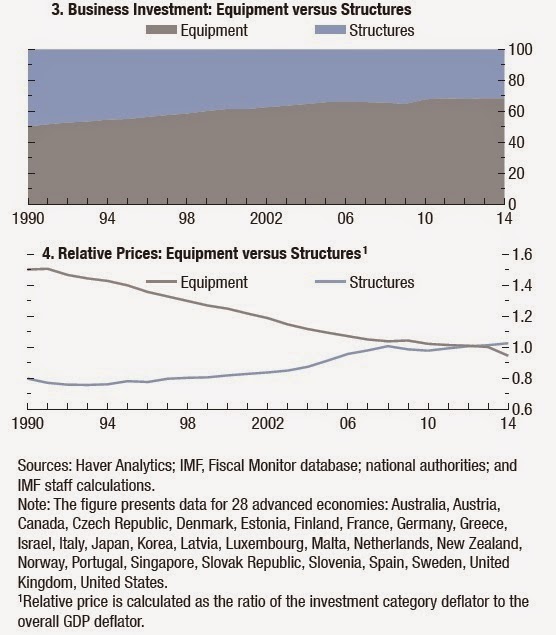