Why Did Sweden, of All Places, Abolish Its Century-Old Inheritance Tax?

The US House of Representatives voted on April 16 to repeal the estate tax. The bill seems unlikely to become law. The US Senate seems unlikely to pass such legislation, because it would be filibustered by Democrats,and President Obama has said he would veto the measure if it passed through Congress. But did you know that Sweden, with its well-earned reputation for egalitarian social policy, abolished its century-old inheritance tax in 2004? Indeed, Portugal also abolished its inheritance tax in 2004, as did Austria in 2008 and Norway in 2014.

Why did Sweden abolish its inheritance tax? Magnus Henrekson and Daniel Waldenström provide background in "Inheritance Taxation in Sweden, 1885–2004:The Role of Ideology, Family Firms and TaxAvoidance,"  written as the Research Institute for Industrial Economics (IFN) Working Paper No. 1032 (October 27, 2014).

For context, here's a figure that offers an illustration of Sweden's inheritance tax over time. The top tax rate rose sharply through much of the 20th century, topping out at 65%. Perhaps more interesting, the horizontal axis gives a sense of the income level where those top rates kicked in. For example, in 1985, although the very top tax rate applied only to those with inheritance levels at roughly 30 times annual income of a worker, many of those with inheritances that were only 10 times the annual income of a worker or less also could end up paying inheritance tax. 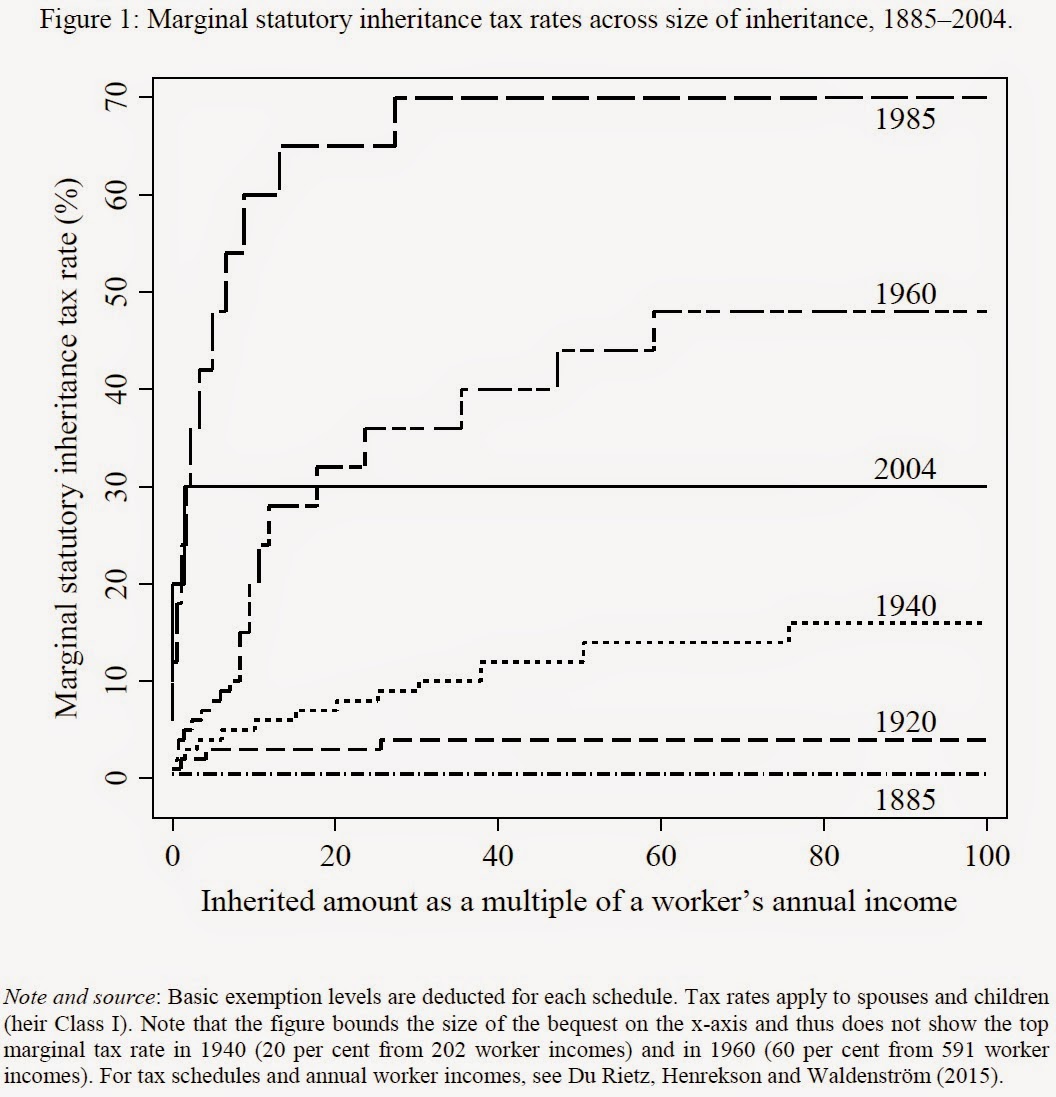 Of course, each country has its own distinctive politics and history that go into the decisions about inheritance taxes. What caused Sweden to abolish the tax in 2004? Here are some of the reasons from Henrekson and Waldenström, with my own thoughts about the arguments apply in a US context.

1) In Sweden, a relatively large share of inheritances owed some inheritance tax. The authors report: "In the last year of the tax, the exemption level was a mere one-quarter of an annual production worker’s income (SEK 70,000), and the top marginal rate was reached at an inherited amount of just over two times the annual income of a production worker." This is probably the main difference with US inheritance tax, which has high exemptions. For example, in 2015 only estates of more than $5.4 million will even potentially need to pay any estate tax at all. Historically, only about 1 in 700 deaths in the US results in paying any estate tax.

2) Sweden had built a number of "safety valves" into its inheritance tax. For example, "owners of unlisted business equity"--often those inheriting a family business--had strict limits on what they would pay. Apparently, someone inheriting a family business in Sweden under no circumstances paid an inheritance tax of more than 9%. There were prominent examples of how wealthy Swedish families (Wallenberg, Söderberg) had created foundations to shield family wealth from the inheritance tax. There were a variety of ways to reduce the estate tax owed: for example, family holdings could be loaded up with debt, to reduce their current value. Money could be passed between generations through real estate holdings, which faced different tax rules, or buy purchasing large life insurance policies, because in Sweden life insurance payments were tax-free for the beneficiary. Of course, one of the easiest ways to pass wealth between generations is to do so before death, by hiring the next generation into the family business at an exorbitant salary. Obviously, when those with high wealth levels have many ways to find ways to avoid or minimize an estate tax, while still passing along wealth to future generations, such a tax ends up looking unfair and pointlessly symbolic. A globalizing economy surely adds to the ways in which wealth can be accumulated and passed on in other nations, where the estate tax rules may be more lenient.

3) The authors point out that in Sweden and in other countries, the tax funds raised by estate taxes are are often around 1-2% or even less of total government revenues. Thus, whether you think that  dropping the estate and inheritance tax is wise or unwise, it makes much less difference to the government bottom line than many other tax changes.

As regular readers know, I'm concerned about the extent to which economic inequality is transmitted between generations. But in the modern US economy, inherited fortunes don't matter in the same way that they did, say, back in 19th century Europe. Instead, I think the transmission of economic inequality in the modern economy happens primarily because of parents who have the resources to do so provide all kinds of extra support and opportunities to their children. I find it hard to get much excited over the current debates about the US estate tax, which are essentially arguments over whether the labyrinthine rules of the tax code will make it harder or easier for a tiny slice of the very wealthiest households--together with their high-priced estate lawyers--to pass along resources after death. I worry a lot more about all the children growing up whose families don't have the resources and connections to provide a special added turbo-boost to their development, and how their life opportunities are being shaped and determined.