What about the EU Single Market?

Discussions of the economic situation in Europe and the eurozone during the last few years have a heavy emphasis on government debt and central bank policy. But from the time when the Treaty of Rome back in 1957 created the European Economic Community, better known as the "Common Market," a primary goal of the European project has been to create a single market. The notion is that goods, services, people, and capital are supposed to be able to move freely across borders. Mario Mariniello, André Sapir and Alessio Terzi offer an overview of how far we have travelled on "The long road towards the European single market," published in March 2015 as Bruegel Working Paper 2015/01. 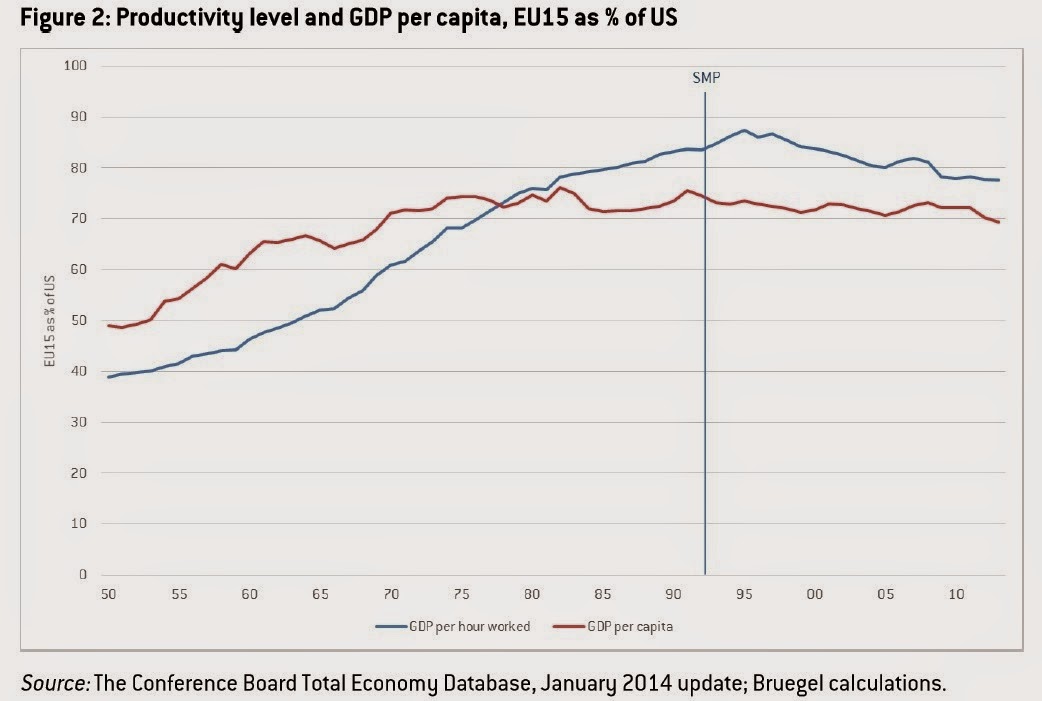 Mariniello, Sapir, and Terzi rehearse the reasons why economic theory suggests a single market should help productivity growth. For example, a single market and lower barriers to trade means that firms face more competition, which should encourage innovation. The cross-fertilization of ideas and methods across Europe should also favor innovation. Firms would be operating in a larger European market rather than a smaller national market, so they can expand to take advantage of economies of scale.  Workers can move to regions where the economy is expanding and job opportunities are more plentiful. Financial integration would help to allocate investment capital to projects with higher rates of return and greater competitiveness.  However, they also point out that when empirical researchers tried to quantify these effects, they don't find much--as the figure above implies.

What went wrong? The authors argue that the single market is far from complete along a number of dimensions. Here is their "non-exhaustive" list of remaining major barriers:

Insufficient mutual recognition. Official tariffs between EU countries are essentially zero. But even more than a half-century after the Treaty of Rome, regulations for products and services still vary considerably across EU countries, so the costs of doing business across borders remain high.

Poor quality of implementation of directives. An OECD report emphasized that efforts to harmonize regulations across Europe and promote competition have often been accompanied by "regulatory creep," adding to the costs of such regulation, as well as by "gold-plating," which is implementation that goes beyond the requirements and thus makes the business climate more complex rather than simpler.

Public Procurement. They cite evidence that public procurement is 16% of GDP in the EU countries, but only 3% of contracts are actually cross border, and only 20% of bids end up being published.

Infrastructure not integrated. Infrastructure is still planned and funded mostly a national level, including both infrastructure for transportation and for communication. The national emphasis tends to be on moving and communicating within the country, not across borders.

Free movement of people. Only about 3% of the EU workforce actually works in another country. Some of the issue is language, culture, and family ties. But another part is that countries often have rules that discourage working elsewhere, like a lack of eligibility for retirement and unemployment programs, lack of recognition of professional qualifications, and lack of coordination on personal taxes that can lead to being double-taxed in two countries on the same income.

Differences in regulation across countries. There is no common set of banking regulations across the EU countries. The 28 countries have  28 different tax codes. Environmental standards and consumer protection standards vary by country.

Of course, this outcome is unsurprising from a political economy viewpoint. On one side, EU countries make strong statements about their commitment to the European project, and at some level they mean it. But when push comes to shove in domestic politics, there remains a strong desire for national control over all sorts of regulations, prodded by national-level interest groups that like limited competition and public monopolies and also play a large role in the electoral fortunes of national politicians.

But as the EU economy staggers along with barely positive economic growth and an unemployment rate that has been above 10% for the last three years (and of course is much worse in certain countries), it's time to recognize that Europe's productivity problems are about more than government debt and managing the euro-zone. Indeed, even if the gains to European productivity are small in the short-term and only emerge over time, there is good reason to believe that moving toward a single market could help to ease some of the macroeconomic stresses created by having such different economies sharing the single euro currency.