Manufacturing Up, Pollution Down: How?

From 1990 to 2008, US manufacturing output (measured in inflation-adjusted dollars) rose by about one-third. At the same time, emissions of six common air pollutants fell by about 60%. How did we pull this off?  Joseph S. Shapiro and Reed Walker tackle this question in "Why is Pollution from U.S. Manufacturing Declining? The Roles of Trade, Regulation, Productivity, and Preferences," which was published in January 2015 as a working paper for the Center for Economic Studies at the US Census Bureau.

Here's a figure showing the basic question. Real US manufacturing output is the solid blue line, where the 1990 level is set equal to 100, and changes are shown relative to that level. The air pollutants shown are carbon monoxide (CO), nitrogen oxides (NOx), particulate matter (PM2.5 and PM10 refer to particulate matter that is either less than 2.5 microns or less than 10 microns), sulfur dioxide (SO2), and volatile organic compounds (VOCs). 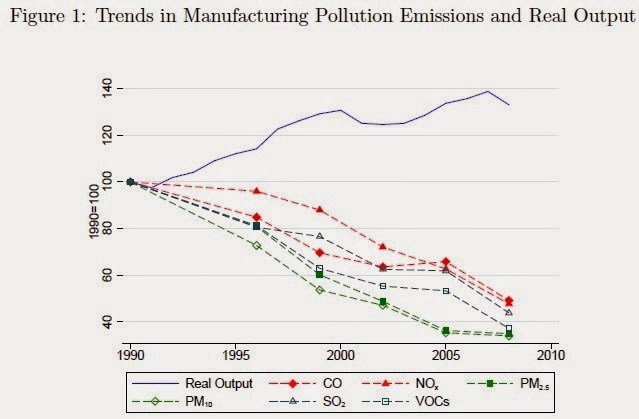 How could this happen? Shapiro and Walker lay out the four most common hypotheses (citations omitted):

The authors use plant-level data that includes the value of shipments, production costs, and pollutants emitted. They lay out a detailed industry-level model of firms and the choices they make about reducing pollution, and then use that estimate the model with data. As is standard for any exercise like this, the model is a useful (and indeed, an unavoidable) way of organizing the data and suggesting connections, and the detailed results will depend to some extent on the specific model chosen. They also do some specific analysis of  the extent to which emissions of specific pollutants changed when tighter rules were put into effect. Readers with the technical skills can dig through the paper and evaluate it for themselves. Here, I'll stick to some big-picture insights.

Instead, Shapiro and Walker find strong evidence that environmental regulations are what made most of the difference. "[W]e fi nd that the increasing stringency of environmental regulation explains 75 percent or more of the 1990-to-2008 decrease in pollution emissions from U.S. manufacturing. ... [W]e find that changes in U.S. productivity have had small e ffects on U.S. pollution emissions at the economy-wide level."

An obvious follow-up question here is: What about carbon dioxide and the potential effects on climate change? In their analysis of air pollution regulation, Shapiro and Walker estimate that the increase in regulatory costs on the six pollutants mentioned above were the equivalent of imposing a pollution tax that more than doubled between 1990 and 2008. However, we have not imposed either such rules or explicit taxes on carbon dioxide, and thus it's not a big surprise that CO2 have not dropped in synch with the other emissions. The authors write: "We also measure implicit tax rates for CO2 , a pollutant which largely has not been regulated. While our inferred tax rates for most pollutants more than doubled between 1990 and 2008, the implicit tax rate for CO2
hardly changed over this time period."

Of course, this sort of study doesn't analyze costs and benefits: that is, it doesn't show either that the costs of these new pollution rules were worthwhile, nor does it analyze whether some alternative form of regulation might been able to achieve the same reduction in pollution at lower cost. However, the fact that it is possible to substantially reduce air pollution while still having manufacturing output rise has broader implications for holding down pollution in the US and around the world. Readers might also be interested in earlier posts on "Costs of Air Pollution in the United States" (November 7, 2011), "Air Pollution: World Biggest Health Hazard" (April 1, 2014), and "Other Air Pollutants: Soot and Methane" (June 28, 2012).