Economists tend to believe that taxing consumption makes more sense than taxing income. When you tax people on income, and then tax them on the return earned from saving, you discourage saving and investment. After all, income that is saved, along with any return on that income, will be consumed eventually. But the US relies much less on consumption taxes than any other high-income country.

Consumption taxes come in two main forms. One is a value-added tax, which in economic terms is essentially similar to a sales tax. The functional difference is that a sales tax is collected from consumers at the point of purchase, while a value-added tax is collected from producers according to the value they add along the production chain.  Then, the value-added tax thus the prices paid by consumers in the same way as a sales tax. The other forms of a consumption tax are taxes on specific kinds of consumption, and in most countries the biggest consumption taxes on specific items are those relating to energy (especially oil), alcohol, and tobacco. The OECD lays out the evidence in its December 2014 report, "The Distributional Effects of Consumption Taxes in OECD Countries." 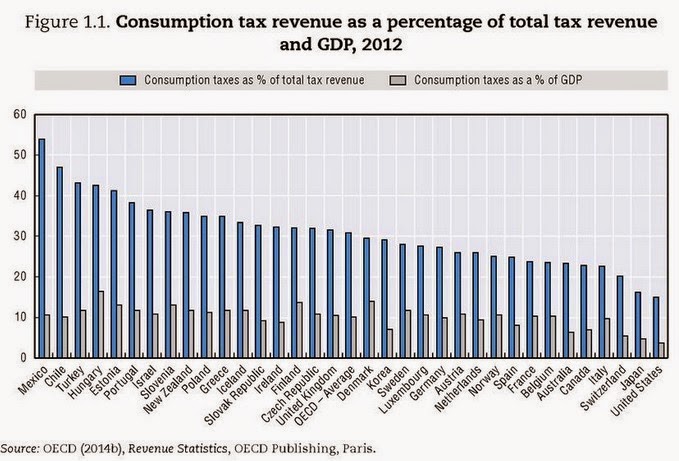 Perhaps the main concern with a value-added tax is that it is regressive: that is, because those with low income tend to consume a higher share of their income than those with higher incomes, those with lower incomes pay the VAT on a higher share of their income, too. Proponents of a VAT point out that this perspective is short-term, and that when viewed over a lifetime, a VAT will look somewhat more egalitarian. But even in the perspective of one or a few years, there are three ways to keep a consumption tax from being overly regressive--although only two of those ways work  especially well.

The most common method that seeks to prevent a consumption tax from being regressive is to exempt certain products from the tax. Most countries have a lower VAT rate on food products, and on certain other products, often including health care, education, newspapers and books, restaurant meals, hotels, water supply, children's clothing, and others. The main problem with this approach is one that also arises for sales taxes in US states, which often have a similar list of exemptions. In an attempt to help those who are poor--who are perhaps 10-20% of the population in these countries--the VAT is reduced for everyone. If the goal is to help the poor, it works much better to, well, help the poor by offering income rebates or food stamps or other income-tested programs. The OECD report sums up the problem this way:

Another approach to the regressive nature spending of a VAT is to focus not on the tax side, but on the spending side. Previous research by the OECD suggests that precisely because the US relies less than other countries on consumption taxes, the US tax code is already highly progressive compared to most other countries. However, patterns of US government spending are aimed less at the poor than in other countries, so the overall result is that the US redistributes less than other countries. A Congressional Budget Office report a few years ago pointed out that while the amount of redistribution happening through the federal tax code hasn't changed much over time, the amount of redistribution happening through federal spending has been declining. In other words, perhaps the goal should be to worry less about focusing taxes on those with high incomes, and instead to work on focusing government spending on those with lower incomes.

Finally, it's quite possible to design a consumption tax that is progressive. It looks a lot like an income tax, except that instead of taxing people based on their income, you tax them on income minus saving--which is the definition of consumption. It would actually be fairly straightforward for the US to turn its income tax into a full consumption tax. It's already true that a high proportion of saving--certain retirement accounts, increases in home equity, capital gains--isn't taxed when the gains occur. The US would have a consumption tax if all saving was deducted from income before taxes were applied.

However, an outright VAT for the US seems highly unlikely. The last time the subject was even broached, back in April 2010, the US Senate quickly bestirred itself for an 85-13 nonbinding resolution that the US should not adopt a value-added tax. Economists have an old joke about a value-added tax which goes like this: "Democrats oppose a VAT because it's regressive and Republicans oppose a VAT because it's potentially a money machine for government. However, the the US will enact a VAT as soon as Republicans recognize that it's regressive and Democrats recognize that it's a money machine for the government."

For more discussion of consumption taxation, with some emphasis on the US exception, a useful starting point is an article in the Winter 2007 of the Journal of Economic Perspectives by James R. Hines, "Taxing Consumption and Other Sins" (21:1, pp. 49-68).