GDP and Social Welfare in the Long Run

On a semi-regular basis, I find myself trying to be polite while someone explains their breathtaking "new" insight that while economists all worship at the altar of GDP, this wise social critic has noticed that measurements of market output are not identical to social well-being. This supposedly new insight has been obvious to economists since they started trying to measure the size of an economy back in the 1930s  and it's been a staple of political rhetoric at least since Robert Kennedy's elegant comments on the subject since 1968.

But while no economist believes that GDP is identical to social well-being, many economists do hold a related belief that growth of GDP over time has a positive correlation with human well-being broadly understood. Late last year, the OECD published a report called "How Was Life? Global Well-Being Since 1820," edited by Jan Luiten van Zanden, Joerg Baten, Marco Mira d’Ercole, Auke Rijpma, Conal Smith and Marcel Timmer. In the course of 13 chapters written by different sets of authors, the report looks at evidence on demography, health, personal security, political structures, the environment, and other broad measures of well-being. The volume can be read online or ordered here. Here, let's do a quick review of the evidence on long-term correlations between economic growth and other measures of well-being, and then return to a discussion of correlation and causation between these factors.

As a starting point, here's a quick review of the evidence on growth of GDP over time.


"The good news is that since the 1820s the average GDP per capita of the world’s population has increased by a factor of 10, a growth that contributed immensely to increased economic well-being. ... The bad news is that GDP growth was very unevenly distributed across the various regions: during the 19th century, rich countries became richer and poor countries fell behind, resulting in a substantial increase in global inequality in GDP per capita. Global inequality kept rising during the first half of the 20th century, when the United States economy grew more rapidly than the rest of the world. After the 1950s, however, this process slowly started to reverse. For the first time, the economic growth rates experienced by poor economies were of a similar magnitude as those of rich economies. And, since the 1970s, low-income countries, in particular in Asia, grew much faster than high-income countries."

Gains in education have a strong positive correlation with per capita GDP over time and across countries, probably a part of a virtuous circle: that is, a more educated workforce helps economic growth, and an economy with higher per capita income can afford to spend more on education. Here's an illustrative figure showing growth in global literacy rates over time. 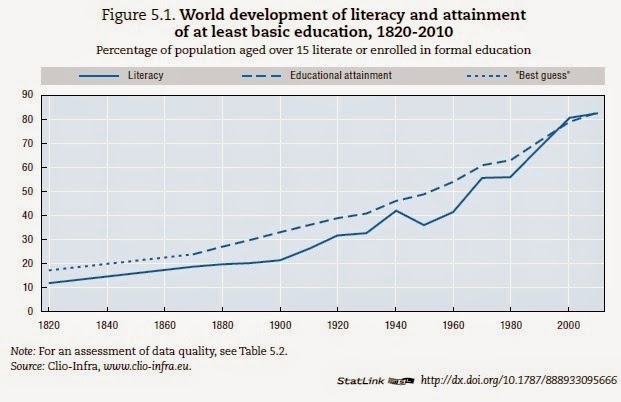 2) Health status over the long-term can be proxied by measures like life expectancy and height. It seems clear that higher per capita GDP is associated with gains in both, although there is some evidence that at the highest levels of GDP, higher incomes are not associated with larger health gains. The report says:

"Life expectancy at birth was about 33 years in Western Europe around 1830, 40 years in 1880, and almost doubled in the period after, with the largest improvements occurring in first half of the 20th century. In the rest of the world, life expectancies started to increase from much lower levels, rising in particular after 1945. Worldwide life expectancy increased from less than 30 years in 1880 to almost 70 in 2000. There is strong evidence of a shift in the relationship between health status and GDP per capita over the past two centuries. Life expectancy improved around the world even when GDP per capita stagnated, due to advances in knowledge and the diffusion of health care technologies." 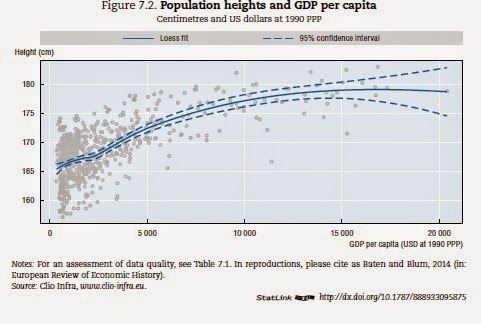 3) Personal security over the long-run can be approximated by using data on homicide rates and on war. The report summarizes the evidence on per capita GDP and homicide rates like this: "Western Europe was already quite peaceful from the 19th century onwards, but homicide rates in the United
States have been high by comparison. Large parts of Latin America and Africa are also violent crime “hotspots”, and so is the former Soviet Union (especially since the fall of communism), while large parts of Asia show low homicide rates. Homicide rates are in general negatively correlated with GDP per capita – the richer a country, the lower the level, but there are important exceptions." Here's a figure showing homicide rates in some selected countries since 1950, with the US rate far above the others. 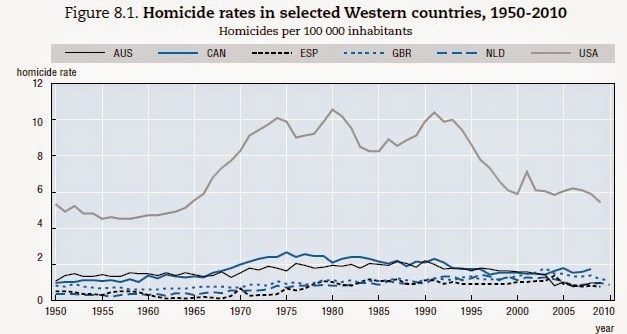 4) The overall pattern of political institutions over time is toward greater participation, but the path has often been a bumpy one. Here's a figure showing an Index of Democracy, where the measure of competition is based on what share of the vote is received by the winning party (when a winning party receives nearly all the votes, competition is low) and a measure of participation based on the share of the adult population that votes. On a worldwide basis, both are rising since 1820. But the rise is bumpy and spiky at times. 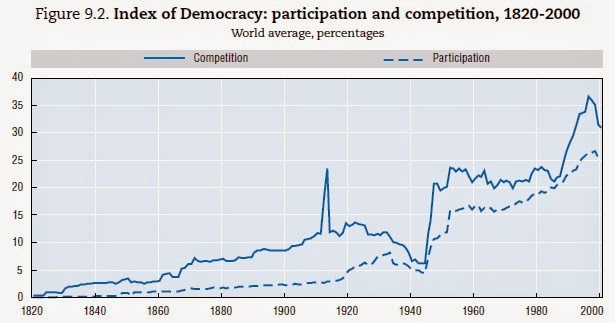 5) Environmental quality is proxied by three measures in this report: biodiversity, and emissions of sulfur dioxide and carbon dioxide. The summary reads: "A negative correlation with GDP per capita is clearly in place when looking at quality of the environment. Biodiversity declined in all regions and worldwide as land use changed dramatically. Per capita emissions of CO2 increased after the industrial revolution in Western Europe and its Offshoots, accelerating in the mid-20th century as other regions increased their GDP, and is still increasing globally. Per capita emission of SO2 (a local pollutant) also increased alongside higher industrial production, but were curbed since the 1970s thanks to the advent of cleaner technologies." Here's a figure showing sulfur dioxide emissions over time: 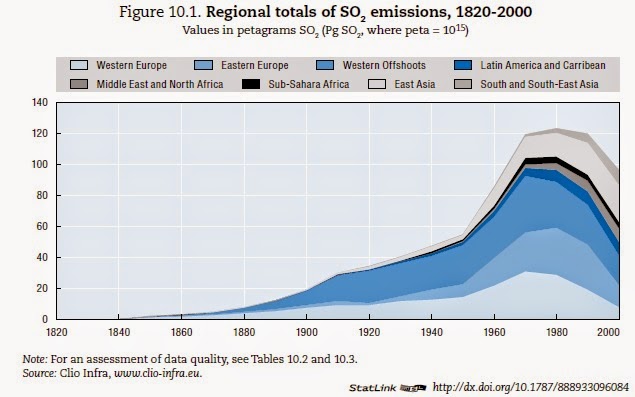 A key question is whether countries will tend to find ways to reduce environmental damage as their per capita GDP rises--as appears to be happening with SO2. Another way of making the point is that the ways in which economic growth affects the environment are strongly affected by public policy choices. As the report notes:


To some extent SO2 emissions follow an environmental Kuznets curve, with declining emissions beyond a certain level of GDP per capita, and in recent periods biodiversity is also less directly (negatively) related to real income levels. Overall, there is still a rather strong negative link between environmental quality (as measured by these indicators) and GDP per capita, but this link has been weakening in recent years (since the 1970s), probably as a result of successful policies to lower emissions (SO2 probably being the best example). 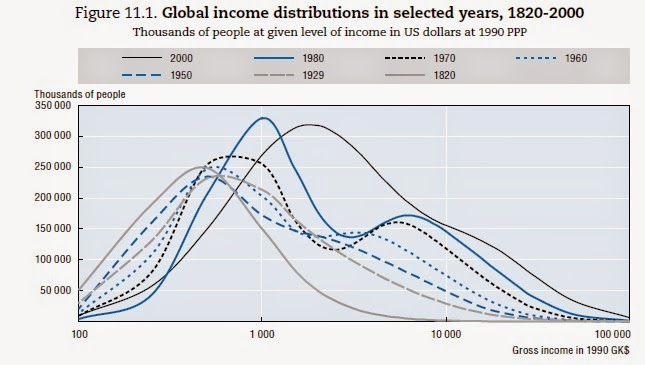 For the global distribution of income, the curves in the figure are gradually moving out to the right as economic growth raises the average world income. The area under the curves is also getting larger, which captures the fact that world population has dramatically expanded. It's interesting to notice that in 1970 and 1980, the global distribution of income had two humps, one at a lower income level and one at a higher income level. By 2000, the world is back to a one-hump income distribution.

From a national and regional level, the patterns show look different: "Long-term trends in income inequality, as measured by the distribution of pre-tax household income across individuals, followed a U-shape in most Western European countries and Western Offshoots. It declined between the end of the 19th century until about 1970, followed by a rise. In Eastern Europe, communism resulted in strong declines in income inequality, followed by a sharp increase after its disintegration in the 1980s. In other parts of the world (China in particular) income inequality has been on the rise
recently. The global income distribution, across all citizens of the world, was uni-modal in
the 19th century, but became increasingly bi-modal between 1910 and 1970 and suddenly
reverted to a uni-modal distribution between 1980 and 2000."

Overall, what should one take away from this exercise in thinking about the relationship economic growth as measured by GDP and other dimensions of human well-being? Here are a few of my own observations.