A second usage is a drop in asset prices: thus, you sometimes hear someone talk about the "deflation" in housing prices or the stock market. But a drop in housing prices or in the stock market has no direct effect on GDP, which only measures what is actually produced.  (Housing prices do affect GDP in an indirect way, because GDP treats homeowners as people who are producing housing services and selling those services to themselves, using an "imputed" value that will be linked to the cost of renting a house, which in turn is linked to the price of the house.)

A third use of "deflation" refers to a drop in economic output. I think that when a lot of people hear the term "deflation," they interpret it as meaning the same thing as "recession" or "depression." It's of course true that a price deflation may be accompanied by a recession, but this has not always been true.

What are the relationships between price deflation, sharp falls in asset prices, and recession or depression? Claudio Borio, Magdalena Erdem, Andrew Filardo, and Boris Hofmann tackle this question in "The costs of deflations: a historical perspective," published in the Bank of International Settlements Quarterly Review for March 2015.

To get an intuitive feeling for what history teaches about the connection from price deflation to recession or depression, here's a useful figure showing when deflations actually occurred. Annual episodes of deflation are shown by circles, while persistent deflation is shown by a horizontal line. (The reader should also note not all countries have price data over this entire period, and in those cases, the triangles show the start of when data is available.) 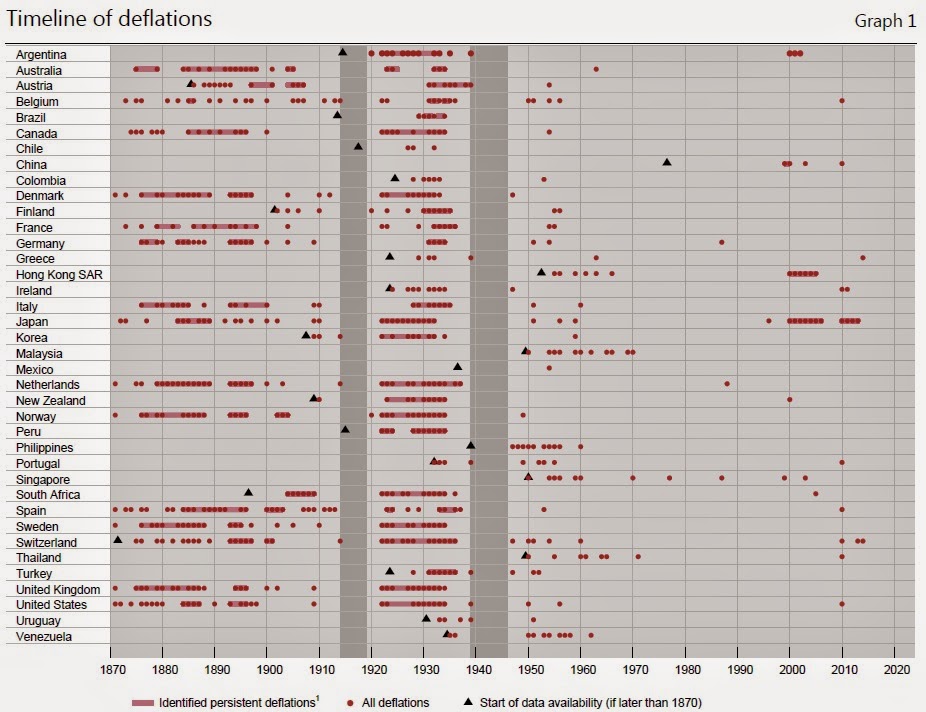 Clearly, there are many episodes of deflation in the late 19th and early 20th century, and then again during the "interwar period" that includes the Great Depression, followed by fewer episodes of deflation since then. The authors note that deflation and Depression clearly go hand in hand, but they also point out that in the 19th century, the 1920s, and the period since World War II, price deflation does not seem to have any strong correlation with economic growth. Indeed, as they point out, economic historians have sometimes referred to 19th century deflation as "good deflation." In the post-World War II years, although the deflations are mostly transitory and this difference is not statistically significant, "the growth rate has actually been higher during deflation years, at 3.2%
versus 2.7%." The Annual Report of the BIS released last summer also made the case that deflation does not have an overall strong historical connection with recession or depression, as I noted here.

To what extent are changes in asset prices correlated with recession or depression? Borio, Erdem, Filardo, and Hofmann use the available data on stock market prices, as well as a newly expanded set of data on historical housing market prices. Thus, they can explore the question of what is the biggest danger for economic growth: price deflation, or a fall in asset prices? Of course, the Great Depression experienced both changes. Here's there conclusion:

Output growth is consistently lower during both property and equity price deflations, and the slowdown is statistically significant except in the classical gold standard period for house prices. The importance of property prices is again greater in the postwar period. ... Once we control for persistent asset price deflations and country-specific average changes in growth rates over the sample periods, persistent goods and services (CPI) deflations do not appear to be linked in a statistically significant way with slower growth even in the interwar period. They are uniformly statistically insignificant except for the first post-peak year during the postwar era – where, however, deflation appears to usher in stronger output growth. By contrast, the link of both property and equity price deflations with output growth is always the expected one, and is consistently statistically significant. ... [I]t is misleading to draw inferences about the costs of deflation from the Great Depression, as if it was the archetypal example. The episode was an outlier in terms of output losses; in addition, the scale of those losses may have had less to do with the fall in the price level per se than with other factors, including the sharp fall in asset prices and associated banking distress.

As the authors readily admit, this analysis is far from conclusive. But it does tend to support the possibility that concerns over price deflation may be overdone, while worries about bubbles in asset prices like stock markets or housing prices may have been underdone. Remember that the last two US recessions in 2001 and 2007-2009 were not preceded by deflation, but where preceded by an asset bubble popping--the dot-com bubble in the earlier episode and the housing price bubble more recently.