Snapshot of Trade Imbalances: The Rise of Germany

As this example illustrates, some of what you may think you know about the patterns of trade surpluses and deficits has been changing during the last few years, so here are a few snapshots for bringing yourself up to date. Here's an edited version (I left out a couple of columns) of a table from Chapter 4 of the the IMF's World Economic Outlook Report for October 2014. 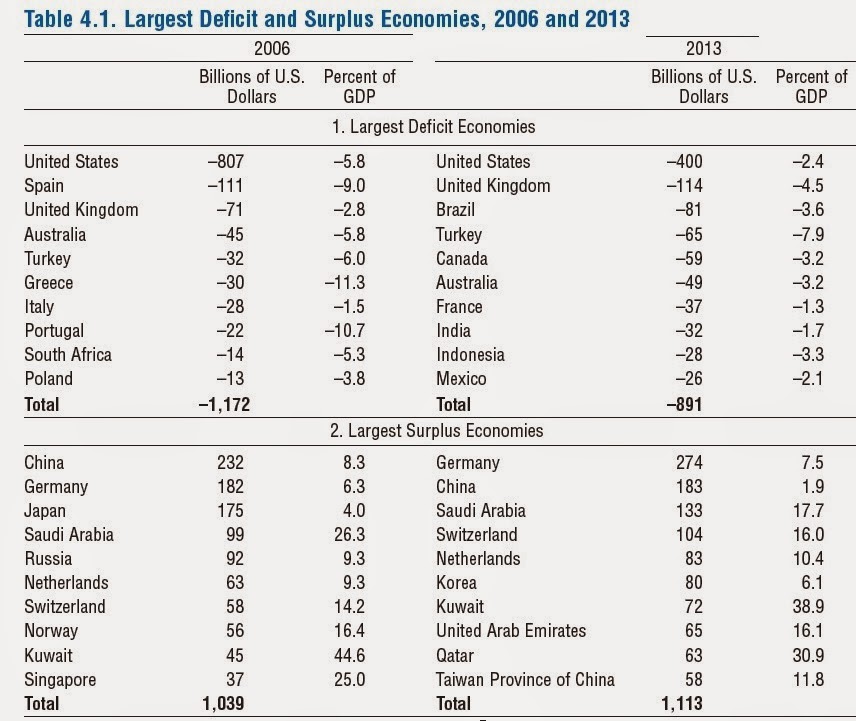 Here are some of the changes that jump out:

1) The U.S. economy still has by far the world's biggest trade deficits in absolute size, but by 2013 they had dropped dramatically compared to 2006.

2) Back in 2006, the huge trade deficits as a share of GDP in Spain, Greece, and Portugal, were all signs of the economic troubles to come in the euro-zone: that is, their imports were exceeding exports by such a huge margin--with the extra imports being financed by inflows of foreign capital--that a hard landing was very likely. By 2013, on the other hand, Spain, Greece, and Portugal no longer appear among the 10 largest trade deficits.

4) Many of the big trade surplus countries in both years are substantial oil exporters: Saudi Arabia, Russia, Netherlands, Kuwait, Qatar, and UAE.  Back in 2013, the price of oil was still high.

Let's take a look at four of the world's major players in international trade: the US, China, Germany, and Japan. Here's a figure showing their trade imbalances (as measured by the current account balance) since 1990. 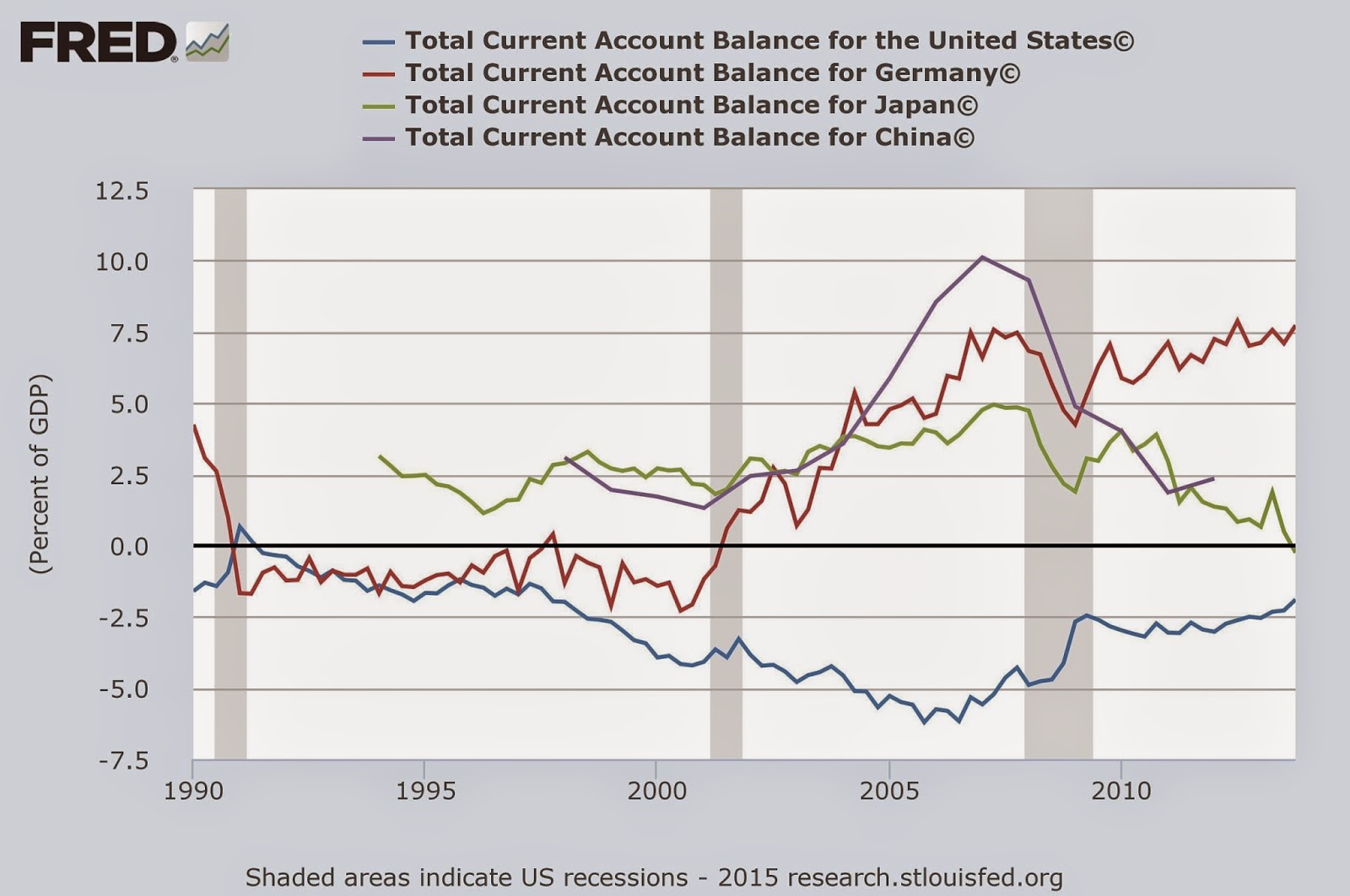 1) The persistent and large US trade deficits (blue line) during this time won't surprise anyone who has been paying attention, but there is a recent drop in the size of these trade deficits.

2) China (purple line) actually had fairly modest trade surpluses through the 1990s. They took off in the mid-2000s, and now are back in the modest range. My belief, explained at greater length here, is that when China joined the World Trade Organization in 2001 the resulting surge of exports surprised everyone--even those in China. For several years now, China's government has had a publicly announced goal of lower trade surpluses, which has in fact been happening.

4) Germany (red line) stands out as the country where trade surpluses have been on the rise since the euro came into widespread use in the early 2000s.

This post isn't the place to rehearse the economics of trade imbalances (for starting points, see here and here). For now, suffice it to say that there is no reason why every country in the world should hope to have a trade balance of zero every year, but problems can arise when very large surpluses or deficits are a signal of economic weakness. For example, in the eurozone and in Germany (as in Japan for much of the period since the early 1990s), large trade surpluses are co-existing with slow or no increase in domestic demand. Here's how the US Treasury phrased the situation in its Report to Congress on International Economic and Exchange Rate Policies on October 14, 2014.


The euro area's overall current account, which was close to balance in 2009-2011, shifted to a surplus of 2.4 percent of GDP in 2013. The euro area’s surplus averaged about 2.3 percent of GDP in the first half of 2014. Germany’s current account surplus was 7.1 percent of GDP in the first half of 2014, up marginally from the second half 2013 surplus of 6.8 percent ...  High surpluses in the euro area have persisted amid exceptionally weak domestic demand growth. Real domestic demand growth was positive in only two quarters in the past three years in the euro area, rendering the region reliant on demand emanating from outside of Europe for economic growth.  ...

Although there has been a rebound in exports in some European peripheral countries, the adjustment process within the euro area would be facilitated if countries with large and persistent surpluses took stronger action to boost domestic demand growth. For example, in Germany, domestic demand has been persistently subdued. German domestic demand growth picked up in the first quarter of 2014, but it flat-lined in the second quarter, leaving domestic demand just 0.9 percent larger in the first half of 2014 than in the second half of 2013. Weakness in investment has been particularly notable, with gross investment contributing negatively to growth in 2012 remaining effectively flat in 2013. ... In 2013, the European Union’s (EU) annual Macroeconomic Imbalances Procedure, developed as part of the EU’s increased focus on surveillance, identified Germany’s current account surplus as an imbalance that requires monitoring and policy action. Notably, the EU stated that, given the size of the German economy, action was particularly important to reduce the risk of adverse effects on the functioning of the euro area.

A few year's back, the major risk of global imbalances was the enormous US trade deficit and the enormous Chinese trade surplus. Both of those risks have ebbed. But the risks posed by Germany's enormous and growing trade surplus remain.