The Share of Women and Other Patterns in the 1%

What's the share of women in the top 1% of the earnings distribution? How has it been changing over time? Fatih Guvenen, Greg Kaplan, and Jae Song tackle this question in "The Glass Ceiling and The Paper Floor: Gender Differences among Top Earners, 1981–2012," published as NBER Working Paper No. 20560 in October 2014. (NBER working papers are not freely available online, but many readers will have access through library subscriptions.)

Here's a figure showing the share of women in the top 0.1% and the next 0.9% of the earnings distribution from 1981-2012. The dashed lines show the data for a given one-year period, with the darker line showing the 0,1% and the lighter line showing the next 0.9%. The solid lines show the data if you average over a five-year period. The darker lines fall below the dashed lines, which suggests that women are less likely than men to sustain a position in the top 0,1% or the next 0.9% over time, but the difference is not large. The trends is clearly upward. For example, based on one-year data, women were about 6% of the top top 0.1% in earnings back in 1982, and were about 18% of this top 0.1% by 2012. As the authors write: "The glass ceiling is still there, but it is thinner than it
was three decades ago." 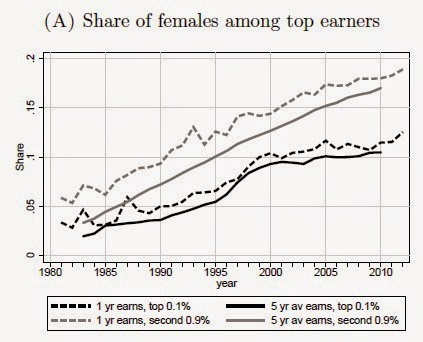 A different way of slicing up the same data is to look at the proportion of men to women in each group at any given time (basically, this is the reciprocal of the figure above). 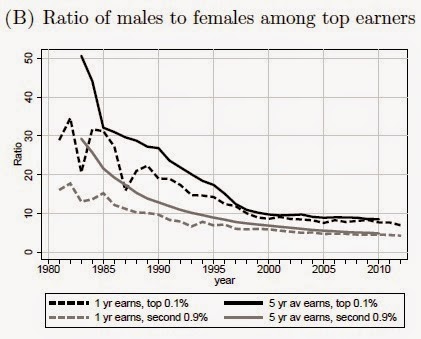 The authors explore this data in considerably more detail. Here are some other facts about the study and highlights that caught my eye.

1) Many studies of the top of the earnings or income distribution look at tax data. In contrast, this study uses data on earnings as reported to the Social Security Administration: more technically, it's a representative 10% sample drawn from the Master Earnings File at the SSA. In the data, people are identified only by anonymous numbers, but because of those numbers, it's possible to track the same people over time--which is why it's possible to look at average income over five years in the figure above. The Social Security data also includes data on the industry of the employer. The data is limited to people between the ages of 25 and 60, who had annual earnings of at least $1,885 as measured in inflation-adjusted 2012 dollars. The measure of earnings here includes wages, bonuses, and any stock options that are cashed in. 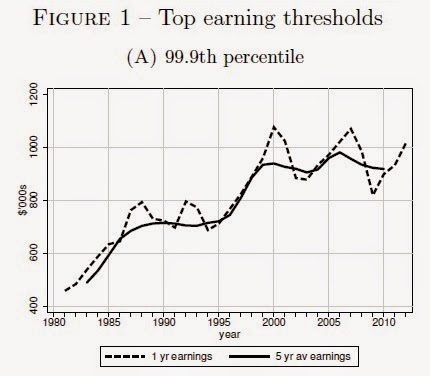 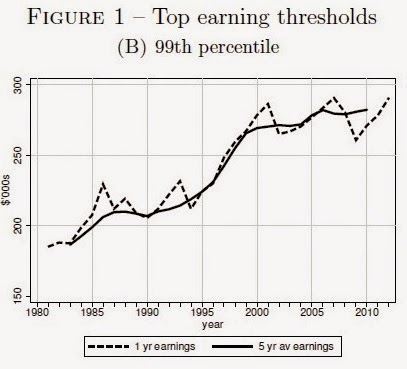 3) Along with the "glass ceiling" that limits women from entering the highest-paying jobs, there is also a discussion in this literature a "paper floor," which is the pattern that women who are highly-paid in one year are more likely than men to drop out of the top earnings group in the following year. However, the "paper floor" seems to have changed over time. The authors write:


This high tendency for top earners to fall out of the top earnings groups was particularly stark for females in the 1980s -- a phenomenon we refer to as the paper floor. But the persistence of top earning females has dramatically increased in the last 30 years, so that today the paper floor has been largely mended. Whereas female top earners were once around twice as likely as men to drop out of the top earning groups, today they are no more likely than men to do so. Moreover, this change is not simply due to females being more equally represented in the upper parts of the top percentiles; the same paper  floor existed for the top percentiles of the female earnings distribution, but this paper floor has also largely disappeared.

5) The persistence of earners who are in the top 0.1% for successive years seems to be increasing, not decreasing.

6) The industry mix of those at the very top is shifting toward finance.