It's easy to compile a list of reports dating back several decades about how the economies of sub-Saharan Africa are really truly about to take off and grow this time. But over the last 10 years or so, there is some evidence that the predictions may at last be coming true. I posted a few months back about the modest but real increases in foreign direct investment to Africa and exports from Africa in recent years. Last May, the African Development Bank put out a report in May called "The Middle of the Pyramid: Dynamics of the Middle Class in Africa."

In developing economies, the "middle class" is usually take to run from $2/day to $20/day in consumption per person. By that standard, here's what Africa's distribution of income looked like in 2010: 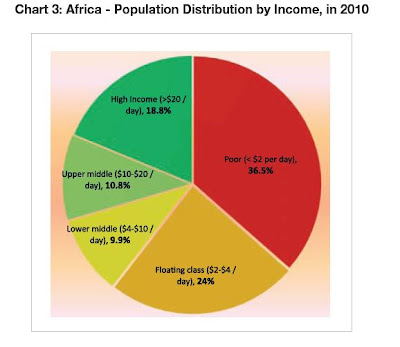 The middle class is important for a number of reasons. It creates a local market that didn't exist before for many goods and services, and can have a positive effect on governance. The ADB reports:

"Strong economic growth in the past two decades has helped reduce poverty in Africa and increased the size of the middle class. Although the growth in Africa’s middle class has not been very robust, it has nonetheless been noticeable and contributed to increased domestic consumption in many African countries, a development that could help to foster private sector growth in African countries. Sales of refrigerators, television sets, mobile phones, motors and automobiles have surged in virtually every country in recent years. Possession of cars and motor cycles in Ghana, for example, has increased by 81% since 2006. As such, the middle class is helping to foster private sector growth in Africa as they offer a key source of effective demand for goods and services supplied by private sector entities.

The middle class is also helping to improve accountability in public services through more vocal demands for better services. The middle class is better educated, better informed and has greater awareness of human rights. It is the main source of the leadership and activism that create and operate many of the nongovernmental organizations that push for greater accountability and better governance in public affairs, a position that augurs well for creating a suitable environment for growth and development."