The World Economic Forum is an independent organization that has been around since the early 1970s. It's perhaps best-known for the annual shindig that it holds in Davos, but the organization also puts out a number of reports on aspects of the global economy. The WEF's 2011-2012 Global Competitiveness Report evaluates 142 countries on more than 100 different indicators.

Here, I focus on the WEF evaluation of the U.S. economy. Overall, the U.S. economy ranks fifth in the WEF's Global Competitiveness Index--behind Switzerland, Singapore, Sweden, and Finland. Clearly this ranking is one of those weighted averages of a lot of stuff, and one can raise questions about the both individual components and weights used. But it's also true that when you look at the indicators as a group, it tells useful story. For the U.S. economy, the story is one of real and deep strengths in areas like the size of its markets, the flexibility of its labor markets, its potential for innovation and technology, the overall competence of business management, and its higher education system. It's also a story of real and deep weaknesses in secondary education, making widespread use of web-based and wireless technologies, and macroeconomic problems of too little saving and too much government borrowing.


Here's the U.S. story in more detail. The WEF groups its 100-plus indicators into 12 "pillars," with the overall U.S. ranking among the 142 countries for that "pillar" shown in parenthesis--and then a few words about the underlying components.

Market size (1st of the 142 countries evaluated)
Many Americans take the benefits of our huge domestic economy for granted, but it allows U.S. firms to take advantage of economies of scale and focus on innovation and productivity. Firms with smaller markets need either to operate at a smaller scale, or else spend the time and money to break into a number of foreign markets.

Labor Market Efficiency (4)
In this category, the U.S. economy gets credit for flexibility in hiring and firing, and for being an economy with relatively little "brain drain"--that is, where highly skilled people want to work. The professionalism of U.S. management also gets some credit. 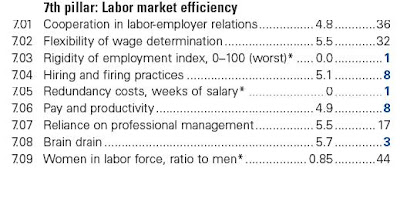 Innovation (5)
This category emphasizes research institutes, R&D spending, scientists and engineers, patents, and capacity for innovation--all categories where the U.S. ranks among the world leaders.

Business sophistication (10)
This category includes distribution, marketing, quantity and quality of local suppliers, delegating responsibility within firms, and clusters of excellence, where the U.S. economy has considerable strengths.

Higher Education and Training (13)
From a world point of view, "higher education" includes secondary school--not just colleges and universities. And here we begin to see some hard issues for the U.S. economy.When it comes to college ("tertiary") enrollment, the U.S. does well. But when it comes to secondary education, and quality of math and science education, the U.S. slips way down the rankings.

Infrastructure (16)
The U.S. doesn't do super-well in roads, railroads, ports, or air transport infrastructure. It falls even a little lower in these rankings in the quality of its electricity supply. And the U.S. has been a slow adopter by world standards of mobile phone technology, which is surely one of the technologies with the broadest implications for re-structuring our economic and personal interactions in the years ahead. 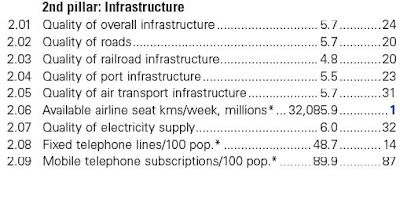 Technological readiness (20)
Color me skeptical on this one. Sure, the U.S. ranks low in "Foreign Direct Investment and Technology Transfer," but given the huge U.S. domestic economy and the fact that it's near the front edge of technology in so many areas, the lower level of getting technology from elsewhere doesn't seem all that worrisome. But this list again emphasize that when it comes to connectivity and the internet, the U.S. is not at the tip-top of the world rankings.

Financial market development (22)
This lower ranking is probably a bit misleading, too. Much of this low ranking is because of difficulties with U.S. banks in the aftermath of the housing price bubble collapse, and is certainly less of a worry in 2011 than it was in early 2009. The same with "ease of access to loans." I haven't dug into the fine print to see how the WEF ranks "regulation of securities exchanges" or "Legal rights index," but these are subjective and potentially controversial. 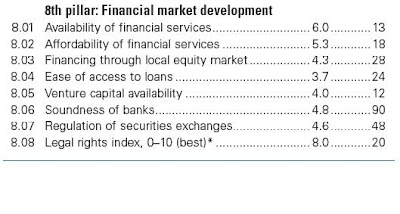 Goods market efficiency (24)
The overall ranking here is probably too low, because some of the lower-ranking elements in this category aren't as important in the U.S. economy, with its technological edge and its huge domestic market, as they would be for many other economies: imports/GDP, customs procedures, trade barriers, and foreign ownership. But the rankings are flagging the dysfunctional U.S. tax code, which has too many legal loopholes and as a result ends up imposing higher-than-necessary rates. There are also some strengths in this area, like the degree of local competition and the sophistication of buyers. 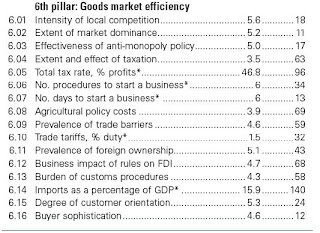 Institutions (39)
Almost all of the underlying facts in this "pillar" are based on an Executive Opinion Survey done by the World Economic Forum. Thus, the rankings are based on the opinions of that group. This approach is fraught with difficulties: business people are being asked about their own countries, and so comparisons across countries are tricky. Also, some will use surveys like this to boost their own country or to bash others. Personally, I'm not so sure that a business community which is critical of its politicians is such a bad thing. I'd worry a bit if the business community felt too cozy with the government! But for what it's worth, here's the breakdown. 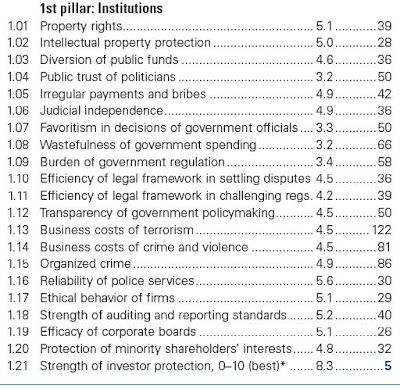 Health and primary education (42)
Again, I mistrust some of these rankings of effects of disease because they measure responses of executives on a survey about how these will affect their company, not actual measures of costs. thus, for example, a country in which business executives worry more about the impact of HIV/AIDS shows up here with a lower ranking. But these rankings also show some well-known difficulties of the U.S. in terms of infant mortality, life expectancy, and even primary education.

Macroeconomic environment (90)This ranking is based on the very low level of U.S. savings, compared with the enormous budget deficits and high levels of accumulated government debt. Oddly enough, what saves this ranking from being even worse is that the U.S. still ranked 9th best in the world for "credit rating" at the time these rankings were done. One suspects that particular ranking won't last.


Overall, here's the two-paragraph summary about the U.S. economy from the WEF report:

"The United States continues the decline that began three years ago, falling one more position to 5th place. While many structural features continue to make its economy extremely productive, a number of escalating weaknesses have lowered the US ranking in recent years. US companies are highly sophisticated and innovative, supported by an excellent university system that collaborates admirably with the business sector in R&D. Combined with flexible labor markets and the scale opportunities afforded by the sheer size of its domestic economy—the largest in the world by far—these qualities continue to make the United States very competitive. On the other hand, there are some weaknesses in particular areas that have deepened since past assessments. The business community continues to
be critical toward public and private institutions (39th). In particular, its trust in politicians is not strong (50th), it remains concerned about the government’s ability to maintain arms-length relationships with the private sector (50th), and it considers that the government spends its resources relatively wastefully (66th). In comparison with last year, policymaking is assessed as less transparent
(50th) and regulation as more burdensome (58th).

A lack of macroeconomic stability continues to be the United States’ greatest area of weakness (90th). Over the past decade, the country has been running repeated fiscal deficits, leading to burgeoning levels of public indebtedness that are likely to weigh heavily on the country’s future growth. On a more positive note, after having declined for two years in a row, measures
of financial market development are showing a hesitant recovery, improving from 31st last year to 22nd overall this year in that pillar."

I've noted some of my qualms about this index. But taken as a whole, this seems to me a fair-minded broad sketch of the strengths and weaknesses of the U.S. economic situation.