The Kuznets Curve and Inequality over the last 100 Years

The Sveriges Riksbank Prize in Economic Sciences in Memory of Alfred Nobel first started being given in 1969, the backlog of worthy economists who were deserving of the prize was very large. Thus, it was a considerable compliment when the third Nobel prize given in economics went to Simon Kuznets in 1971. Among other major contributions, Kuznets was one of the primary contributors to thinking through the issues of constructing national income accounts and GDP. But my focus here is on a theory which grew out of his Presidential Address on "Economic Growth and Income," delicvered to the American Economic Association in 1954 and published in the March 1955 issue of the American Economic Review. This lecture led economists to speak of a "Kuznets curve."

Here's a short explanation of the logic behind the Kuznets curve from Branko Milanovic in the September 2011 issue of Finance and Development has several articles with perspectives on inequality. "The Kuznets curve, formulated by Simon Kuznets in the mid-1950s, argues that in preindustrial societies, almost everybody is equally poor so inequality is low. Inequality then rises as people move from low-productivity agriculture to the more productive industrial sector, where average income is higher and wages are less uniform. But as a society matures and becomes richer, the urban-rural gap is reduced and old-age pensions, unemployment benefits, and other social transfers lower inequality. So the Kuznets curve resembles an upside-down `U.'"

In 2011, of course, the notion that inequality always declines as an economy grows no longer seems plausible. Later in the same issue, Facundo Alvaredo offers some nice figures of trends in inequality around the world since about 1900, where inequality is measured by the share of total income going to the top 1% of the income distribution. There are four figures, each with a group of countries. "In Western English-speaking countries, inequality declined until about 1980 and then began to grow again. Continental European countries and Japan had a decline until about 1950; since then income distribution has leveled. For Nordic and Southern European countries, the drop in inequality in the
early part of the century was much more pronounced than the rebound in the late part of the period. Developing countries show initial declines in inequality followed by a leveling off in some cases and an increase in inequality in others." 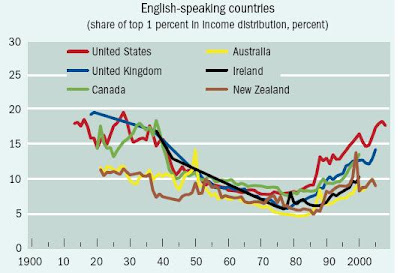 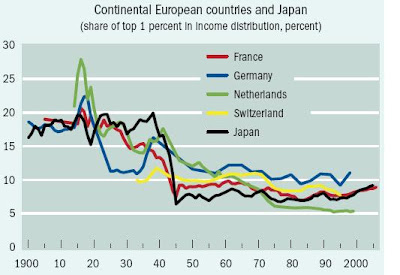 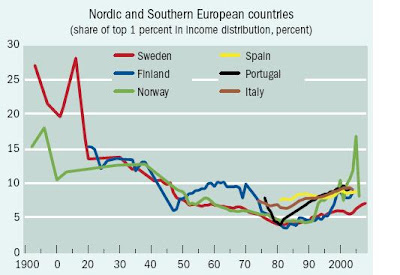 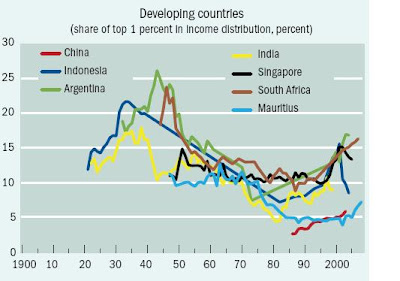 For a series of posts in July on the extent and causes of U.S. income inequality, see:

How high is U.S. income inequality?

Causes of Inequality: Supply and Demand for Skilled Workers

How the U.S. Has Come Back to the Pack in Higher Education