Ross C. DeVol, Armen Bedroussian, and Benjamin Yeo write on "The Global Biomedical Industry: Preserving U.S. Leadership," which is available (with free registration) from the Milken Institute website. In this industry, they include pharmaceuticals, medical devices and equipment, and the accompanying research, testing, and medical labs. Some excerpts (footnotes deleted throughout):

The U.S. hasn't always been a leader in biomedical technologies

"Prior to 1980, European firms defined the industry, both in terms of market presence and in their ability to create and produce innovative new products. Historical advantages and an enviable concentration of resources fueled the success of firms in Germany, France, the U.K., and Switzerland. Japan had a presence in the industry as well. But beginning in the 1980s, the United States surged to the forefront of biomedical innovation. This sudden and remarkable shift was no accident: It was the result of strong policy positions taken by the federal government. The absence of price controls, the clarity of regulatory approvals, a thoughtful intellectual property system, and the ability to attract foreign scientific talent to outstanding research universities put the U.S. on top."

The shift to U.S. leadership in pharmaceuticals

The share of new chemical entities for the world as a whole produced by firms with a U.S. headquarters rose from about 31-32% in the 1970s and 1980s to 57% in the most recent decade. The U.S. share of global pharmaceutical R&D spending has risen to roughly half the world total over the last decade. 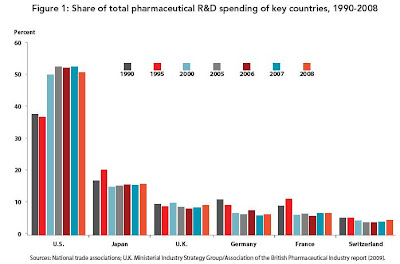 The U.S. has no guarantee of continuing its technological leadership

"The dominance enjoyed by the U.S. biomedical industry does not come with a long-term guarantee. The U.S. assumed the mantle of leadership by being the first to commercialize recombinant DNA research—and that achievement was made possible only because it had built an environment and infrastructure that allowed innovation to flourish. But if another nation duplicates or improves upon this formula by building a similar ecosystem and subsequently makes a pivotal scientific breakthrough in nanotechnology, personalized medicine, embryonic stem cell research, or some other cutting-edge field, it could tip the scales in the other direction. That scenario is a real possibility: While the U.S. led with 29.7 percent of nanotech-related patents granted between 1996 and 2008 (as measured by resident country of first-name inventor), China was a close second, with 24.3 percent of these patents. ... Pharmaceutical patents that credit at least one inventor in China or India rose four-fold between 1996 and 2006—China held 8.4 percent and India 5.5 percent of worldwide patents. Other countries in Asia and around the world are also making advances, among them Taiwan, South Korea, Malaysia, Australia, Canada, Brazil, and Chile. ... In stem cell science, other nations with sophisticated biomedical research infrastructure in place—including the U.K., Japan, France, Switzerland, and several others—have instituted more flexible government funding guidelines than the U.S. These nations have been attracting leading embryonic stem-cell researchers from countries with more restrictive policies."

The U.S. advantage in regulatory processes and clinical trials is diminishing

"While the FDA has seen an increase in average review times, the European Medicines Agency (EMA) has been streamlining. After declining to 12.3 months in 2007, the average FDA review time for new drugs increased to 17.8 months in 2008. This number does fluctuate, and while it improved in 2009, anecdotal evidence suggests that the 2010 numbers will reflect a slowdown. Meanwhile, the EMA has reduced its drug approval time to 15.8 months. ... Medical device approvals from the FDA have become even more problematic than drug approvals. The EMA approves some devices in almost half the time it takes for similar approvals by the FDA. ..."

"Innovation is the driver of ultimate market success, and the U.S. originated more than half of the leading 75 global medicines (or new active substances as measured by worldwide sales) in 2009. Clinical trials are a critical step in that process as well as a benchmark that reflects the degree of innovation taking place in a given location. As of early 2011, 50.9 percent of all clinical trials in the world were being held in the U.S. Despite the size of its clinical capacity, the average relative annual growth in the U.S. declined by 6.5 percent between 2002 and 2006. Meanwhile, trial growth, particularly among emerging nations, outpaced the U.S. during that time. In countries
like China and India, average relative annual growth increased by 47 percent and nearly 20 percent, respectively. ...


Clinical trials are a lengthy and expensive step in the U.S., but other countries are finding ways to make trials faster and more cost-effective.As shown below, emerging markets such as China and India can conduct clinical trials for about half the cost of those in the U.S. Russia is even more cost-effective and offers experienced researchers trained in “Good Clinical Practice” standards set by the International Conference on Harmonization. In Russia, 8,000 (or 1 in 86) physicians are involved in clinical trials. ... In addition to cost advantages, these emerging nations also have vast populations that make it faster and easier to enroll the required number of patients in a trial. According to the Association of Clinical Research Organizations, completely enrolling patients in a phase III clinical trial for a cancer treatment would take almost six years in the U.S. However, if companies have access to a global pool of patients, the process could be cut to less than two years. These new international options for clinical trials pose clear benefits to U.S. firms: They can conduct some
portions of their testing overseas, reducing their time and costs while gaining valuable knowledge about how to adjust their compounds as they move through the U.S. approval process. An estimated 40 to 65 percent of clinical trials that investigate FDA-regulated products are conducted outside the U.S.,  although many of these trials are for comparative purposes.

"But taking a longer view, this trend raises a cautionary flag for U.S. competitiveness. Clinical trials require scientific staff, and as other nations develop this specialty, they are amassing high-value experts, infrastructure, and technical capacity. U.S. firms will increasingly have to fight for their share of a finite pool of global talent and investment dollars, and the U.S. economy may lose high-wage jobs. In 1997, according to the Tufts Center for the Study of Drug Development, about 86 percent of FDA-registered principal investigators were based in the United States, but by 2007, that was down to only about 54 percent." 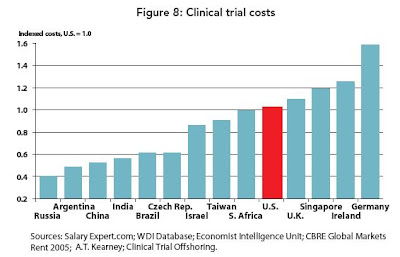