U.S. Poverty by the Numbers

Each September the U.S. Census Bureau releases an annual report on the U.S. poverty rate. Each year, the report is grist for the media mill for a few days, with arguments that the official poverty rate overstates or understates "true" poverty. But at least in the days right after the poverty numbers come out, I prefer not to perform in this annual dance of the definitions. Here, I'll make four more basic points, with minimal editorializing: 1) Show the 2010 poverty thresholds and trends over recent decades; 2) Show how poverty has come to affects the young more than other age groups; 3) Show the drop in median household income not just since the start of the recession in 2007, but back to 1999; and 4) Preview an argument about definitions of poverty that is coming next month.

1) The 2010 poverty thresholds and trends over recent decades

The poverty rate is based on money income. As the report explains: " If a family’s total money income is less than the applicable threshold, then that family and every individual in it are considered in poverty. The official poverty thresholds are updated annually for inflation using the Consumer Price Index (CPI-U). The official poverty definition uses money income before taxes and tax credits and excludes capital gains and noncash benefits (such as Supplemental Nutrition Assistance Program benefits and housing assistance). The thresholds do not vary geographically." The poverty thresholds are adjusted for household size and for number of children in the household. Here they are for 2010:

As an economist, I lack any talent for drama. But I do sometimes try to give a little life to the poverty thresholds by pointing out that the poverty line for a three-person household with two children is $17,568. Divide that by 365 days in a year, and by three people per meal. It's about $16 in total consumption per person per day. There are high-end restaurants in most U.S. cities where $16 will buy you a fancy appetizer. The share of the population below this poverty line--the "poverty rate"-- dipped in the 1960s, but since the 1970s has hovered between about 12-15% of the population. 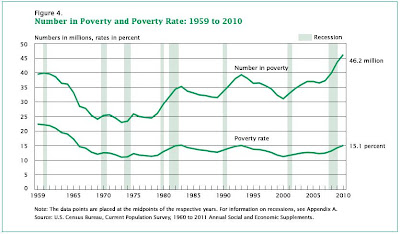 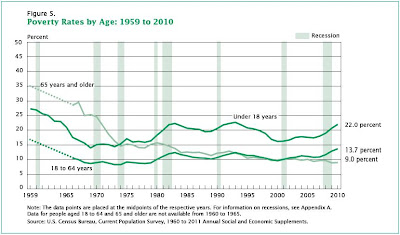 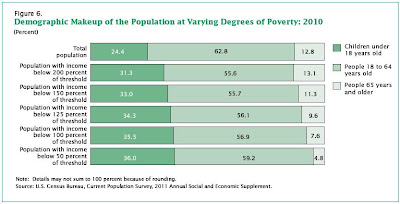 3) Median household income has dropped not just since the start of the recession in 2007, but compared to 1999 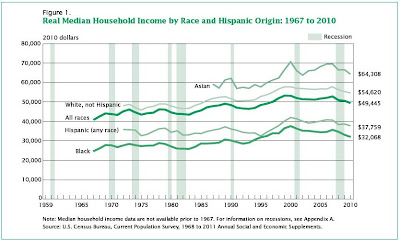 The Census Bureau is of course perfectly aware of the disputes over how poverty should be measured, and has long offered alternative measures of poverty for those who took the time to read the fine print. Back in 1995, there was a big National Academy of Sciences report on ways of measuring poverty. In October, the Census Bureau is planning to come out with a measure of poverty that is more closely linked to actual consumption:


"The official poverty measure, which has been in use since the 1960s, estimates poverty rates by looking at a family’s or an individual’s cash income. The Supplemental Poverty Measure will be a more complex statistic, incorporating additional items such as tax payments and work expenses in its family resource estimates. Thresholds used in the new measure will be derived from Consumer Expenditure Survey expenditure data on basic necessities (food, shelter, clothing, and utilities) and will be adjusted for geographic differences in the cost of housing. The new thresholds are not intended to assess eligibility for government programs. Instead, the new measure will serve as an additional indicator of economic well-being and will provide a deeper understanding of economic conditions and policy effects."