Each year the Kansas City Fed holds a research conference in Jackson Hole in late August that attracts many of the beset and the brightest in the central banking and economic research community. Back in the Paleolithic era, one used to have to wait months until the printed conference volume came out, or try to cadge a copy of working papers from authors. But now, of course, all the papers are posted here. In this post and the next two, I'll hit the high spots of three of the papers that particularly struck me.

Dani Rodrik offers a characteristically interesting reflection on "The Future of Economic Convergence."   He starts with some nice figures to show the convergence that has occurred. The first shows growth trends in the world economy from 1950 to 2008. Rodrik writes:

"The world economy experienced very rapid growth in the decade before the global financial crisis. In fact, once we smooth out the annual variations, growth reached levels that were even higher than those in the immediate aftermath of World War II (Figure 1), which is remarkable in view of the fact that growth in the early 1950s was boosted by reconstruction and recovery from the war.The growth pattern of the world economy since 1950 looks U-shaped: a downward trend from about 1960 until the late 1980s, followed by a strong recovery since then.

What this trend hides, however, is the divergent performance of developed and developing countries. As Figure 2 shows, developed countries have experienced a steady decline in growth since the 1960s, from around 3.5 percent per annum in per capita terms during the 1950s to below 2 percent in the early years of the new millennium. The recent recovery in global growth is due entirely to a remarkable improvement in the performance of the developing parts of the world. Growth in developing countries nearly tripled from around 2 percent per capita in the 1980s to almost 6 percent before the crisis of 2008. It is China (and the rest of developing Asia) that accounts for the bulk of this performance. But high growth in East and Southeast Asia predates the new millennium, and what is especially noteworthy about the recent experience is that Latin America and Africa were, for once, part of the high-growth club. Growth picked up in both regions starting around 1990, and surpassed levels not experienced since the 1960s ..." 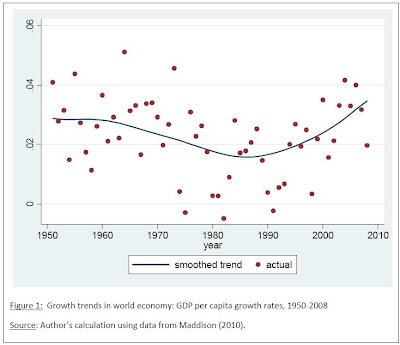 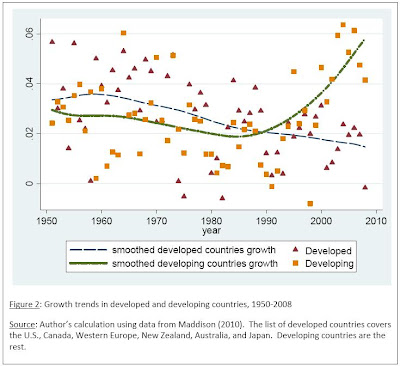 Rodrik then poses the hard question on which he has been gnawing for a few years now: What caused this convergence to occur and can it be relied upon to continue? He points out that the standard story of why convergence has occurred tends to emphasize good economic housekeepings: factors like getting monetary and fiscal policy under control, opening to international trade, improvements in governance, and the spread of global production networks. But he argues that China and other growth successes are hardly bastions of conventional economic wisdom. Rodrik writes:


"China’s policies on property rights, subsidies, finance, the exchange rate and many other areas have so flagrantly departed from the conventional rulebook that if the country were an economic basket case instead of the powerhouse that it has become, it would be almost as easy to account for it. After all, it is not evident that a dictatorship that refuses to even recognize private ownership (until recently), intervenes right and left to create new industries, subsidizes lossmaking state enterprises with abandon, “manipulates” its currency, and is engaged in countless other policy sins would be responsible for history’s most rapid convergence experience. One can make similar statements for Japan, South Korea and Taiwan during their heyday, in view of the rampant government intervention that characterized their experience. As for India, its half-hearted, messy liberalization is hardly the example that multilateral agencies ask other developing countries to emulate. Foreign economists advise India to speed up the pace of liberalization, open its financial system, rein in corruption, and pursue privatization and structural reform with greater vigor. India’s political system meanwhile dithers."

So what explains why convergence starts at certain times, and why it takes hold in certain places but not in other? Rodrik looks at a sectoral level and finds that certain industries, if a country gets a foothold in those industries, seem to experience a rapid convergence to global productivity standards. These industries often involve tradeable manufactured goods, including cars, machinery and equipment, and motorcycles. He presents a striking result that when these industries are established, their tend to converge almost regardless of the government's economic policies--unless those policies are truly terrible.

Rodrik then makes the provocative claim that a difficult issue for many economies is whether they have the flexibility to expand and move labor into these "escalator industries." If labor moves into these industries, overall economic convergence can occur. But in some cases--and he offers examples from Latin America and Africa--rapid productivity growth in one trade-oriented industry has reduced the need for labor in that industry, and thus thrown workers back into lower-productivity industries, a phenomenon he called "growth-reducing structural change."


I'm not always fully convinced by Rodrik's work, but I find it continually intriguing and thought-provoking.