It is possible that although inequality within many countries is rising, global inequality is actually falling. After all, a number of countries with lower levels of per capita income, like China and India, have been experiencing rapid growth. Perhaps from a global viewpoint, the gap between high and low incomes is diminishing even though within countries, that gap has been rising.

In the Winter 2000 issue of my own Journal of Economic Perspectives, Robert E. Lucas
contributed "Some Macroeconomics for the 21st Century."  He offers a horse-racing metaphor that I have found useful in explaining the rise in global inequality over the last couple of centuries--and he predicts that the 21st century will be one of greater global equality. Here's Lucas:


"We consider real production per capita, in a world of many countries evolving through time. For modelling simplicity, take these countries to have equal populations. Think of all of these economies at some initial date, prior to the onset of the industrial revolution. Just to be specific, I will take this date to be 1800. Prior to this date, I assume, no economy has enjoyed any growth in per capita income—in living standards—and all have the same constant income level. I will take this pre-industrial income level to be $600 in 1985 U.S. dollars, which is about the income level in the poorest countries in the world today and is consistent with what we know about living standards around the world prior to the industrial revolution. We begin, then, with an image of the world economy of 1800 as consisting of a number of very poor, stagnant economies, equal in population and in income.

"Now imagine all of these economies lined up in a row, each behind the kind of mechanical starting gate used at the race track. In the race to industrialize that I am about to describe, though, the gates do not open all at once, the way they do at the track. Instead, at any date t a few of the gates that have not yet opened are selected by some random device. When the bell rings, these gates open and some of the economies that had been stagnant are released and begin to grow. The rest must wait their chances at the next date, t + 1. In any year after 1800, then, the world economy consists of those countries that have not begun to grow, stagnating at the $600 income level, and those countries that began to grow at some date in the past and have been growing every since.

The first is that the first economy to begin to industrialize—think of the United Kingdom, where the industrial revolution began—simply grew at the constant rate a from 1800 on. I chose the value α = .02 which, as one can see from the top curve on the figure, implies a per capita income for the United Kingdom of $33,000 (in 1985 U.S. dollars) by the year 2000. ...

So much for the leading economy. The second assumption ... is that an economy that begins to grow at any date after 1800 grows at a rate equal to a α = .02, the growth rate of the leader, plus a term that is proportional to the percentage income gap between itself and the leader. The later a country starts to grow, the larger is this initial income gap, so a later start implies faster initial growth. But a country growing faster than the leader closes the income gap, which by my assumption reduces its growth rate toward .02. Thus, a late entrant to the industrial revolution will eventually have essentially the same income level as the leader, but will never surpass the leader’s level. ...

"Ideas can be imitated and resources can and do flow to places where they earn the highest returns. Until perhaps 200 years ago, these forces sufficed to maintain a rough equality of incomes across societies (not, of course, within societies) around the world. The industrial revolution overrode these forces for equality for an amazing two centuries: That is why we call it a “revolution.” But they have reasserted themselves in last half of the 20th century, and I think the restoration of inter-society income equality will be one of the major economic events of the century to come."

What is the evidence on global inequality? Branko Milanovic offers a useful figure, where inequality is measured by the Gini coefficient. For those not familiar with this term, the quick intuition is that it is a measure of inequality where 0 represents complete equality of income and 100 represents complete inequality (one person has all the resources). Here is a figure showing Gini coefficients for relatively equal Sweden, the less equal U.S. economy, the still-less-equal Brazilian economy, and the world economy. 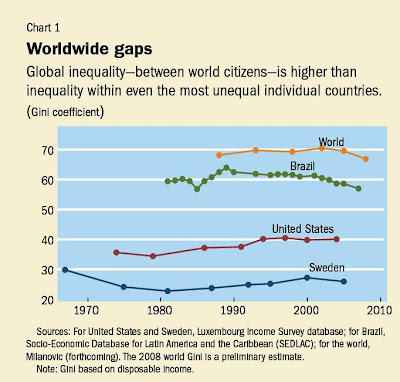 Milanovic writes: "Global inequality seems to have declined from its high plateau of about 70 Gini points in 1990–2005 to about 67–68 points today. This is still much higher than inequality in any single country, and much higher than global inequality was 50 or 100 years ago. But the likely downward kink in 2008—it is probably too early to speak of a slide—is an extremely welcome sign. If sustained (and much will depend on China’s future rate of growth), this would be the first decline in global inequality since the mid-19th century and the Industrial Revolution.

One could thus regard the Industrial Revolution as a “Big Bang” that set some countries on a path to higher income, and left others at very low income levels. But as the two giants—India and China—move far above their past income levels, the mean income of the world increases and global inequality begins to decline."