The U.S. Loses its Dominance in Initial Public Offerings

The United States used to dominate the market for provision of initial public offerings, but no longer.
Craig Doidge, G. Andrew Karolyi, and René M. Stulz document the patterns in a March 2011 paper "The U.S. Left Behind: The Rise of IPO Activity Around the World." It can be downloaded at SSRN, or for those with access to NBER working papers, it is available as #16916.

Initial public offerings matter for at least two reasons. In a direct sense, they are an important way in which successful entrepreneurial companies have access to financing for expansion. In an indirect sense, IPOs tend to go where the financial and legal institutions are favorable. Thus, a drop-off in IPOs is bad news for entrepreneurs, and also acts as a sort of canary in the coal mine, telling you that the institutional environment for raising capital in this way isn't favorable. Here is their overview:

"We build a comprehensive sample of 29,361 IPOs from 89 countries constituting almost $2.6
trillion (constant 2007 U.S. dollars) of capital raised over 1990 to 2007. Although the worldwide share of IPO activity by U.S. firms still ranks near the top, during the 2000s, U.S. IPOs have not kept up with the economic importance of the U.S. In the 1990s, the yearly average of the number of U.S. IPOs comprised 27% of all IPOs in the world while the U.S. accounted for 27% of world Gross Domestic Product (GDP). Since 2000, the U.S. share of all IPOs has fallen to 12% whereas its share of worldwide GDP has averaged 30%. The average size of a typical IPO in the U.S. is larger than that in the rest of the world so that IPO proceeds may be a more relevant metric. Yet, in the last five years of our sample, IPO proceeds raised by U.S. firms drop to 16.2% of world IPO proceeds, despite the fact that the stock market capitalization of the U.S. relative to that of the world averages 41% during this period."

The first figure that follows shows counts of the total number of IPOs: the red line showing the world total, and the other lines showing those occurring in the U.S., the UK, and China. The second figure shows proceeds from IPOs, measured in millions of dollars. The third figure shows the declining U.S. share of the IPO market over time as measured by the number of IPOs done. 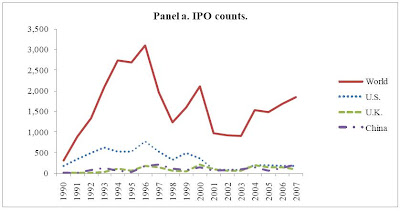 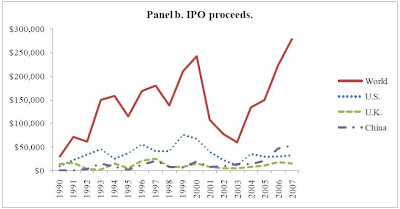 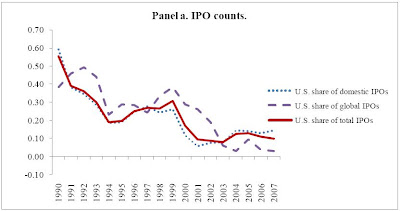