How Does Inequality Affect Economic Growth?

Historically, many economists believed that a healthy degree of economic inequality was good for economic growth. Branko Milanovic explains in "More or Less":

"The view that income inequality harms growth—or that improved equality can help sustain growth—has become more widely held in recent years. ... Historically, the reverse position—that inequality is good for growth—held sway among economists. The main reason for this shift is the increasing importance of human capital in development. When physical capital mattered most, savings and investments were key. Then it was important to have a large contingent of rich people who could save a greater proportion of their income than the poor and invest it in physical capital. But now that human capital is scarcer than machines, widespread education has become the secret to growth. And broadly accessible education is difficult to achieve unless a society has a relatively even income distribution. Moreover, widespread education not only demands relatively even income distribution but, in a virtuous circle, reproduces it as it reduces income gaps between skilled and unskilled labor. So economists today are more critical of inequality than they were in the past."

The economic literature on the possible causal relationship between inequality and growth seems to have gone from arguing for such a connection in the 1980s and early 1990s, to arguing that the connection wasn't so important in the mid-1990s, and now back to arguing that it may be important.

In "Why Aren't All Countries Rich?", Jessie Romero of the Richmond Federal Reserve discusses some patterns in this literature. As this figure shows, the Latin America and the Sub-Saharan Africa regions have consistently had the greatest degree of inequality. 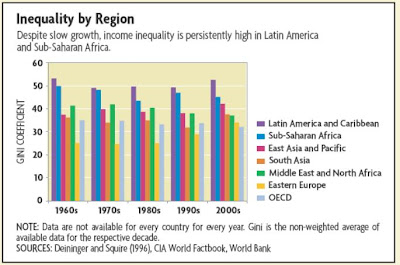 Thus, given the relatively slow growth rates in these regions in the 1980s and 1990s, and the comparatively fast growth rates in more-equal Asia, economic research at that time had often claimed a connection between greater inequality and slower growth. However, in 1996, Klaus Deininger and Lyn Squire ("A New Data Set Measuring Income Inequality", World Bank Economic Review, 10(3): 565-91, 1996) pointed out that this kind of comparison across countries didn't control sufficiently for other factors that could vary across regions and countries, like variations in political and social institutions or in initial level of development. In their analysis, with these kinds of factors taken into account, the degree of economic inequality didn't seem to influence subsequent growth.


More recently, Andrew G. Berg and Jonathan D. Ostry have been taking a look at the relationship between inequality and the length of periods of economic growth, and their readable summary of their results is here. They write (citations and references to charts have been cut):

"Most thinking about long-run growth assumes implicitly that development is something akin to climbing a hill, that it entails more or less steady increases in real income, punctuated by business cycle fluctuations. ...  The experiences in developing and emerging economies, however, are far more varied. In some cases, the experience is like climbing a hill. But in others, the experience is more like a roller coaster. Looking at such cases, Pritchett and other authors have concluded that an understanding of growth must involve looking more closely at the turning points—ignoring the ups and downs of growth over the horizon of the business cycle, and concentrating on why some countries are able to keep growing for long periods whereas others see growth break down after just a few years, followed by stagnation or decay. A systematic look at this experience suggests that igniting growth is much less difficult than sustaining it. Even the poorest of countries have managed to get growth going for several years, only to see it peter out. Where growth laggards differ from their more successful peers is in the degree to which they have been able to sustain growth for long periods of time."

In their work, interestingly enough, income inequality and trade openness are major factors in determining how long periods of growth will last, while political institutions and foreign direct investment are of intermediate importance, and external debt and exchange rate competitiveness are of little importance.