Too Much Debt? Jackson Hole II

This is the second of three posts on some of the papers presented at the Jackson Hole conference held in late August by the Kansas City Fed. The first post is here; the final post will be up later. All the papers from the conference are posted here.

Stephen G. Cecchetti, M. S. Mohanty and Fabrizio Zampolli of the Bank for International Settlements write about "The Real Effects of Debt." They illustrate that a powerful trend during the last few decades toward more debt in a number of high income countries. For example, if one looks at a simple average debt/GDP ratio for 18 OECD economies, including the United States, the combined debt/GDP ratio for government, corporate, and household debt rose from 165% of GDP in 1980 to 310% of GDP in 2010. The biggest increase over this time is debt for the household sector, which tripled in real terms over this period. (Just to be clear, this is non-financial sector debt, so it doesn't count what financial institutions owe to other financial institutions in their role as intermediaries.) 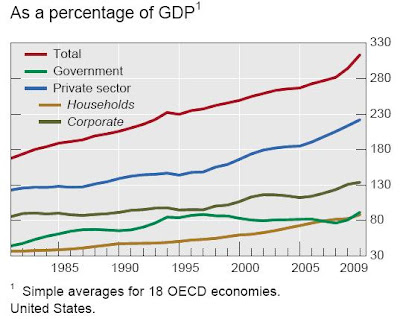 While longer-run data on debt across sector isn't available for all 18 countries that they examine, they offer a longer-run picture of U.S. debt. As they point out, U.S debt tended to hover around 150% of GDP for most of the time until about 1985, when it started rising. (The bump in debt/GDP ratios in the Great Depression, of course, was because the denominator of GDP in that ratio fell so sharply.) Since the 1980s, household debt has been rising faster than private-sector debt.

With these facts in mind, they raise a broader question: "At moderate levels, debt improves welfare and enhances growth. But high levels can be damaging. When does debt go from good to bad?" They use a regression framework that adjusts for many factors and tries to discern threshold effects, which a perfectly reasonable first shot at the issue, although it's the kind of approach that always raises questions about whether the correlation is a causation and whether there are omitted variables. They find:

"Our examination of debt and economic activity in industrial countries leads us to conclude that there is a clear linkage: high debt is bad for growth. When public debt is in a range of 85% of GDP, further increases in debt may begin to have a significant impact on growth: specifically, a further 10 percentage point increase reduces trend growth by more than one tenth of 1 percentage point. For corporate debt, the threshold is slightly lower, closer to 90%, and the impact is roughly half as big. Meanwhile for household debt, our best guess is that there is a threshold at something like 85% of GDP, but the estimate of the impact is extremely imprecise."

The financial crisis of 2007-2009 brought home how easily household borrowing or corporate borrowing, when it goes bad, can turn into government borrowing for bailouts. When thinking about the problems of debt burdens facing the U.S. economy, it seems unwise to look only at government borrowing.