This is the third of three posts on some of the papers presented at the Jackson Hole conference held in late August by the Kansas City Fed. The first two posts are here and here. All the papers from the conference are posted here.

Back in the 1999 edition of the Jackson Hole conference, Barry Eichengreen and Ricardo Hausmann presented a paper on "Exchange Rates and Financial Fragility."  In that paper they applied the term "original sin" in this way:

"This is a situation in which the domestic currency cannot be used to borrow abroad or to borrow long term, even domestically. In the presence of this incompleteness, financial fragility is unavoidable because all domestic investments will have either a currency mismatch (projects that generate pesos will be financed with dollars) or a maturity mismatch (long-term projects will be financed with short-term loans). ... Original sin seems to capture a fact about the world. What causes it is an open question. One hypothesis is that a history of inflation and depreciation renders investors reluctant to invest in domestic-currency assets and to invest long term. In fact, however, original sin appears to apply as well to more than a few emerging markets that do not have a recent history of high inflation. Essentially, all non-OECD countries have virtually no external debt denominated in their own
currency."

Original sin was often near the root of international financial crises during the last few decades, because when an emerging market economy had borrowed in another currency, and then its exchange rate fell, the repayment of loans in domestic currency could no longer repay the international debts in the foreign currency. At the most recent Jackson Hole conference, Eswar Prasad points out in "Role Reversal in Global Finance" that emerging economies have now responded to wash their hands of "original sin."

Prasad points out that international financial integration is increasing: "[T]here has been a generalized
increase in de facto financial openness, as measured by the ratio of the sum of gross stocks of external assets and liabilities to GDP. Among advanced economies, the median level of this ratio has more than doubled over the past decade. The increase is large but less spectacular for emerging markets. ... China and India were relatively closed in de facto terms in 2000 but have become much more open since then. Other than Brazil and Russia, which experienced minor dips, virtually every major economy—advanced or emerging—has a higher level of assets and liabilities relative to GDP in 2010 compared to 2007, indicating that the financial crisis did not reverse or stop rising global financial integration. Rising gross external positions have important implications for growth, international risk sharing and financial stability. As gross stocks of external assets and liabilities grow in size, currency volatility will have a larger impact on fluctuations in external wealth and on current account balances." 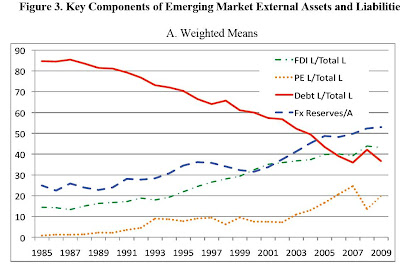 As the figure shows, there has been a dramatic shift in international liabilities for emerging markets toward foreign direct investment and portfolio equity. On the asset side, there has been a substantial move toward building up foreign exchange reserves, mainly in U.S. dollars. Here's Prasad's figure showing that build-up. 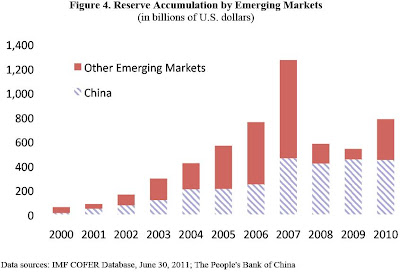 For emerging economies, the risks of international finance have changed quite substantially. With their huge foreign exchange reserves and their lack of borrowing in foreign currencies, they are much better insulated against shocks to their exchange rates than they were in the 1990s. However, instead of having risks on the liability side, from the risk that they would be unable to repay their borrowing in foreign currency, they now face two new risks.

A first risk is that their enormous foreign exchange holdings will be diminished in value, either because of a rise in inflation in the U.S., Europe and Japan which reduces the real value of the debt, or because of a depreciation of the dollar, euro, yen, and pound relative to the currencies of the emerging market economies. As Prasad writes: "As the safety of these assets comes into question, the risk on emerging market balance sheets has now shifted mostly to the asset side. These countries may be forced to rethink the notion of advanced economy sovereign assets as being "safe" assets, although they are certainly highly liquid."

The second risk is that the current inflows of financial capital, in the form of foreign direct investment and portfolio equity, can create problems for domestic markets in emerging countries. Prasad explains: "For emerging markets, the major risks from capital inflows are now less about balance of payments crises arising from dependence on foreign capital than about capital inflows accentuating domestic policy conundrums. For instance, foreign capital inflows can boost domestic credit expansions, a factor that made some emerging markets vulnerable to the aftershocks of the recent crisis. New risks from capital account opening are related to existing sources of domestic instability--rising inequality in wealth and in opportunities for diversification and sharing risk. Capital inflows and the resulting pressure for currency appreciations also have distributional implications as they affect inflation and adversely affect industrial employment growth. The right solution to a lot of these problems involves financial market development, especially a richer set of financial markets that would improve the ability to absorb capital inflows and manage volatility, broader domestic access to the formal financial system (financial inclusion), and improvements in the quality of domestic institutions and governance."

Posted by Timothy Taylor at 2:00 PM