The U.S. Postal Service has broached the possibility of closing 3,700 post offices. It hopes to save $200 million per year by doing so, but the USPS is losing $8 billion a year. Whatever the merits and demerits of the closures, many other things are going to have to give.

The fundamental challenge for the USPS can be shown in one diagram taken from a recent white paper from the Office of the Inspector General. The volume of mail rose for decades, but has now topped off and dropped dramatically. A network built for the amount of mail being delivered in 2005 just won't work for the volume of mail being delivered in 2010. 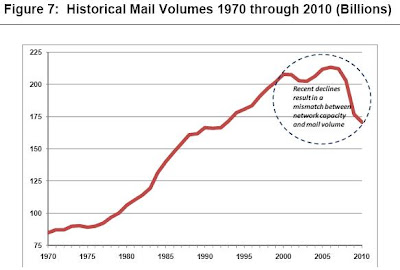 So what's to be done?

The USPS has done a considerable amount to cut costs with automation, drop-shipping, work-sharing, and more. A July 2011 report from the Office of the Inspector General, "The Cost Structure of the Postal Service: Facts, Trends, and Policy Implications," points out: "The Postal Service appears to have greatly improved its efficiency in the last decade. Workhours have declined 27 percent since 2000 — a massive drop. Total Factor Productivity (TFP), a measure of the Postal Service’s operational efficiency, improved 10 percent over the same period."

What about home delivery of mail only five days per week, dropping Saturday?

The USPS has been suggesting mail delivery for just five days per week for several years now. For example, this June 2011 report to Congress argues that such a policy could save $3.1 billion in the first year, and more in succeeding years.

Delivering first-class mail on average a day slower?
A white paper recently released by the Office of the Inspector General on "Cost of Service Standards" points out that slower mail delivery could save money. "The Postal Service’s network was designed for the high-speed transmission of First-Class Mail correspondence and transactions for individuals and businesses. The diversion of much of this mail to electronic alternatives raises the question of whether the high speed service that some postal products receive is still worth its cost. The overnight First-Class Mail service standard requires the Postal Service to maintain processing plants that operate through the night and on Sundays. In addition, stringent service standards for First-Class Mail and Priority Mail are the primary factors that determine if mail travels by ground or by the more expensive air transportation. ... [B]y extending service standards for preferential mail classes by 1 day, the research identifies savings of up to $1.5 billion in premium pay and other mail processing costs."

Yet another white paper from the Office of the Inspector General, a July 2011 report called "A Strategy for a Future Mail Processing & Transportation Network," suggests that the backbone of the current mail processing network has about 260 facilities. It suggests a plan for cutting this to 135 mail processing facilities, and estimates this can save $2 billion per year.


Issues involving funding of retiree benefits
I don't know the ins and outs of this dispute, but the USPS believes that it has been overcharged by the federal government for its pension and retirement costs. The same white paper states: "The Postal Service had been unfairly overcharged $75 billion for the Civil Service Retirement System (CSRS) pensions and has overfunded the Federal Employees’ Retirement System (FERS) by an additional $7 billion. In addition, the Postal Service’s retiree health liabilities were previously exaggerated by using a 7 percent rather than a 5 percent health care inflation rate. Correcting overpayments and transferring any surplus to the retiree health fund would fully fund the Postal Service’s retiree obligations and eliminate the need for further prefunding (except for normal costs as needed). ... Unless the issues of overcharging and overfunding are addressed, the cost structure will spiral out of control and put the Postal Service’s financial sustainability at risk." While I haven't investigated the merits of this dispute, it suggests that the USPS faces a substantial but one-time cost associated with dealing with its retirees.

Letting the USPS charge more for packages and periodicals
The report mentioned earlier, "The Cost Structure of the Postal Service: Facts, Trends, and Policy Implications," points out that costs for delivering packages and periodicals have been rising by more than the USPS is allowed to charge. "One of the most significant trends in evaluating Postal Service costs concerns the use of the price cap tied to the CPI-U for all market dominant products. ... The price cap received a great deal of attention in September 2010 when the Commission ruled against the Postal Service’s request for approval of an exigent rate case which would have increased rates an average of 5.6 percent across all market-dominant products. For years, average cost increases for First-Class Mail tracked closely with increases in the CPI-U. However, the recession of 2008 to 2009, in combination with the accelerating pace of diversion to electronic communication, has undone this historical relationship with per piece costs far outpacing CPI-U growth. ... When evaluating cumulative unit cost increases over the past decade as compared to inflation, all of them have increased more than CPI-U. Package Services and Periodicals, products traditionally requiring more handling, had cost increases far higher than the cumulative CPI-U increase of 24 percent while First-Class Mail unit costs average just above that percentage."

Even with a combination of five-day delivery, arriving on average one day slower, and consolidating the network for mail processing, and dealing with the overhang of retiree costs, and continued productivity gains, and charging more for packages and periodicals, and an eventual economic recovery it's not clear to me that the U.S. Postal Service as it stands can break even. Thus, one final issue needs to be raised.


Time for more competition in postal delivery?
Americans tend to think of our economy as a place of tough-minded competition, especially as opposed to those other high-income countries of the world that tend to have more government regulation and quasi-monopoly. When it comes to postal service, this stereotype is flatly untrue.

R. Richard Geddes described the situation in Summer 2005 issue of my own Journal of Economic Perspectives in "Policy Watch: Reform of the U.S. Postal Service"-- an article which pointed out many of the financial troubles that have now arrived.  Geddes pointed out in 2005 that most other high-income countries of the world are allowing greater competition in postal delivery. A common transitional step is to require new entrants to charge more than the existing postal service, and then to phase down this required higher charge over time. In an essay published in 2009 in Regulation, Deregulation, Regulation (a book edited by Claude Menard and Michel Ghertman), Geddes writes (footnotes omitted): "Moreover, many other governments have substantially reformed their postal services. For example, New Zealand, Sweden, and Finland abolished their postal monopolies as of 2002. Australia's monopoly is limited to four times the stamp price only, and may be reduced to the stamp price itself. The European Union has limited all postal monopolies to five times the stamp price and is planning to eliminate them entirely. Many postal services are also moving to privatization. For example, the Dutch post service is 60 percent privatized, while the German  post is majority privately owned." Geddes emphasizes that postal delivery remains highly regulated in the rest of the world. But clearly, issues about providing universal mail delivery can and are being addressed all around the world without needing to give one organization a monopoly over mail delivery.